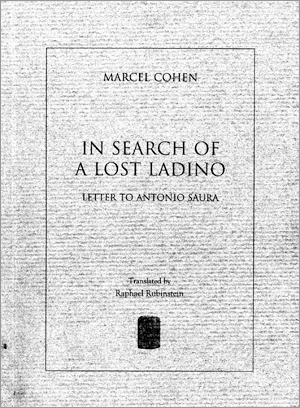 “And if words are our true domain how could they not be part of our future?” —Marcel Cohen

Marcel Cohen’s In Search of a Lost Ladino: Letter to Antonio Saura, translated by poet and art critic Raphael Rubinstein, is a memoir that meditates on the possibility of a personal and historical recovery through the act of translation. Written in 1981, and published three years later, the text is now available for the first time in English through Ibis Editions, a Jerusalem-based small press specializing in the translation of Judeo, Arabic and French texts to promote cross-cultural dialogue. Marcel Cohen’s personal memories of growing up in France amid a community of exiled Turkish Jews are juxtaposed with dream-like evocations of the torture and expulsion of Jews during the Spanish Inquisition of 1492, and the proceeding centuries of exile in the Ottoman Empire, culminating in the Holocaust of the 20th century. The book was composed in Judeo-Spanish (Ladino), the language Cohen spoke with his family from childhood—but had never learned to write in. The difficult transformation of a spoken childhood language into a written “adult” text can be understood as the ultimate attempt on the part of the author to reclaim his Turkish/Judeo-Spanish heritage.

At the heart of this experimental merging of childhood recollection and sophisticated discourse is the Ladino language itself—the lingua franca of the Jews of the Ottoman Empire, now alive only to linguistic scholars and a minor population of elderly speakers. In Search of a Lost Ladino was first published in Madrid in its original Ladino and was thus selectively understood by contemporary Spaniards whose own language still resembles the Spanish-Turkish-Greek-Hebrew concoction of Ladino. The work was later re-imagined in Cohen’s translation of Ladino into French and further complicated by his choice to leave certain words and phrases in their original Ladino form rather than substitute the appropriate French. In his introduction, Rubinstein compares these un-translated Ladino words to highlights on a painting—singular aspects of language resistant to the surface homogeneity of the text in translation. However, the English version does include a glossary of Turkish and Greek Ladino words to encourage the lay reader to discover the nuances of the language.

The original Ladino title of the book was Letras a un pintor ke kreya azer retratas imaginarios (Letters to a painter who believes he makes imaginary portraits). In the French translation it was shortened to Letter to Antonio Saura, Cohen’s long-time friend, a Spanish painter who created a suite of semi-abstract ink drawings of “imaginary portraits” for the text. Cohen employs the intimate letter format to unravel his own feelings concerning the complex Spanish heritage of guilt and forgiveness. The underlying sentiment is that Saura’s (and all Spaniards’) Iberian ancestors are implicated in the Spanish expulsion of the Jews in the 15th century—a legacy that the artist has no choice but to confront when engaging with the “imaginary” in the creative act. Cohen argues that collective memory is what fuels the creative gesture more wholly than a “pure” imaginary act—an idea that allows him to interpret Saura’s vivid expressionistic drawings as portraits of the Spanish Jews and their tormentors. A unique combination of Judeo mysticism and faith in the unconscious motive fuels Cohen’s intense belief: “For me the imaginary is simply what we have forgotten.”

Along this line of inquiry, Cohen reaches further to connect artists and Jews to the same transcendent quest for meaning and recovery: “Artists are kuturgis (imaginative), Antonio. But their memories are sometimes so vast that their works draw on knowledge they don’t even know they possess. Jews are the sameâ¦they always know more than they think, even when they think they’ve forgotten everything.” In describing the portraits, Cohen uses the Ladino word soytariz, a juggler or buffoon—an apparition of the past that can only be exorcised by the artist’s attempt to wrestle with its form. By linking his Ladino-translation project to Saura’s portrait project, Cohen is ostensibly comparing two mediums’ approach to the same problem: how to realize the personal experience through the horror of history.

In reference to the Ladino language, Cohen asks Saura, “Will this mother ever die? In her our past grows old; in her we are completely present to ourselves.” Ladino may be reaching its evaporation point of near extinction, but in its personification as an ancient mother it will continue to provide words to wrap around the present and seek the past in.

The idea of home is as persistent and transient as the taste and smells of the Ottoman Empire. In one passage we are taken through the city streets of Istanbul—a pleasure that Cohen never experienced first-hand, but understands through the Ladino language. “Smell of garlic at the trouchigi. Sweat of the jamales. Donkey urine. Lemon scented eau de cologne when a well-dressed very kebar man passed by in the streetâ¦rose water. Gilled meat. Smoke from the ships.”

The over-arching dream-like quality of the prose is due in part to the conflation of historical events with personal memories—both singular to Cohen and collectively belonging to his people. On a linguistic level this is achieved by the repeated use of we to describe the historic Sephardic Jewish community as well as the author’s own extended family. Ghosts inhabit the book’s characters: A great uncle describes himself in song to a young Cohen as an exiled king of the city of Salonica, a Greek port of the Ottoman Empire where Ladino was the common language until the Holocaust decimated the Jewish population. The memory allows Cohen to rhapsodize to Saura on the concept of a “dethroned and ancient” Jewish community, sentenced to exile around the world, yet keeping the flame of their language, customs, and curious gestures alive. “‘The exiled Salonicans’ remember the blue of the sea and the blue of the skyâ¦the horns of the ships coming into port and the long silvery waves when they went out again.”

In the literature of Jewish exile, the motif of the sea and sky are potent symbols of an unattainable homeland. In the 1960’s, André Aciman re-located from his native Alexandria to Rome and Paris, before settling in New York City. In False Papers, he describes a childhood train trip along the Ligurian coast, which offered enchanting glimpses of the Mediterranean Sea—moments that inspired a giddy sense of homesickness.

Passing by so extended a seascape was like passing by Alexandria, the way we do in dreams, waving hello to a house that is no longer ours, that belongs to others but might revert to us any moment now, because the universe would make so much sense if indeed it did.”

Edmond Jabès, a writer translated by Cohen, shares a similar history of exile and creative reconciliation within a foreign culture. The Suez crisis in the late 1950’s prompted Jabès and his family to leave Cairo for Paris, where he created a body of work that evoked the cycles of loss and regeneration in Jewish communities. Jabès’s The Book of Questions, published in 1963, is the first text in a unique literature that fuses a nascent literary post-modernism with older forms of Jewish mysticism and the poetics of French surrealism. The result is a highly idiosyncratic experimental literature that opens pathways for new form of dialogue about writing as a form of historical mourning and reconciliation.

Do I know, at this hour when men lift up there eyes to the sky, when knowledge claims a richer more beautiful part of the imagination (all the secrets of the universe are buds of fire soon to open), do I know, in my exile what has driven me back through tears and time, back to the wells of the desert where my ancestors has ventured? There is nothing at this threshold of the open pageâ¦nothing but this pain, whose past and whose permanence is also that of writing. (from The Book of Questions)

In an interview conducted by Paul Auster in 1978, Jabès echoes Cohen’s theory that the author’s pool of memory remains the primal source for inspiration. “‘Writing’ has to do with experience, with having lived something, rather than imagination.” For writers like Jabès and Cohen it makes no difference whether the “lived experience” is derived from a personal engagement or the tapping into a collective stream of experience. Cohen’s theory about Jews and artists sharing the same metaphysics of creative life and thought, is extended by Jabès to include writers: “The difficulty of being Jewish is the same as the difficulty of writing. For Judaism and writing are but the same waiting, the same hope, the same wearing out.”

Raphael Rubinstein describes Cohen’s language as Proustian, but acknowledges the force behind the project is a far cry from the narcissism of “blind nostalgia.” While Swann was able to vividly recall the lost world of childhood from the taste of a single tea-soaked madeleine, Cohen’s source is far more elusive—it is the Ladino language itself in all its glorious, ancient, fragmented form. After extrapolating on the varieties of Jewish oppression, persecution, and exile, the narrative spins around to reveal a light beneath darkness. “Without that demon, Vicente, without the Catholic kings, we would never have left Spain. And after all it’s not so bad to do a little traveling.” Cohen’s litany of misfortunes suffered by the Jews is always modified by a stunning visual sublime—glimpses of the Mediterranean Sea and sky. While his ancestors have suffered from “plague, famines, arson, and the blood-letting of the innocent,” they are also “living with the taste of honey, dreams, the warmth of the sea, and the stars.” In one of the most persuasive visual moments in the text, Cohen describes “pale as milk” grandmothers who live a life of fear and timidity yet never misplace their umbrellas. Only through playful, reverie-laden moments such as these does the text emerge from an otherwise heavy, mournful tone. To solve the problem of a conclusion to his quiet opus, Cohen returns to the childhood root of the project to analyze the very object we hold in our hands. “And books? They’re a lot like the toys we give to children, something that gains adults a few brief moments of peace and quiet.”

The Politics of Language, In & Of Translation

At a moment where the freedom of movement is no longer a human right, time itself expands, unless it dissolves, becomes measureless; waiting becomes a way of life.