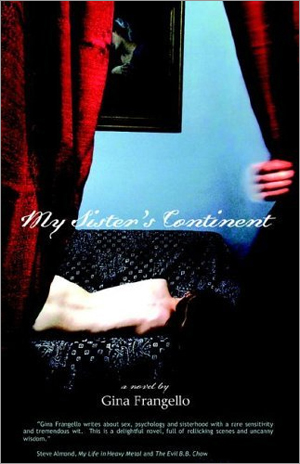 At a time when evangelical values have, by Bush or by crook, descended upon the United States like the aftermath of a Hiroshima mushroom cloud, we might as well remember a controversial Victorian, Sigmund Freud. Gina Frangello’s debut brings Freud’s eloquently mixed up “drive theory” to the forefront of accessible and urgent storytelling. Even more Freudian hysterical (or too smart for her own good sly as a fox), Frangello’s reader may (choose to) remain dissociated from the fact that My Sister’s Continent is “deconstruction.” Whether a reader wants it to be Freudian or not, she will walk away feeling she has read one of the most gut kicking, hard to scrape off the skin, and honest explorations of a family’s unrelenting psychosexual secrets (dredged up from an Elektra-Oedipal heirloom rug).

You hole up and munch your organic dark chocolate while General Hospital’s endless Sonny and Carly antics tease. You dare not mention your dirty little television habit to your hip urban friends at dinner. This taboo-pleasure relationship beckons the power of Frangello’s novel, because while she grasps the efficacy of the soap opera’s ceaseless and paced genealogical melodrama, she spins it—dizzy. Frangello’s Freudian revision persists as an ever-addictive read, and a seemingly mimetic demonstration of what Freud, in Dora: An Analysis of a Case of Hysteria (1905-1909) not only analyzed—yet literally—listed.

An analysis of a female patient’s dream as the core of her sexual and family narrative provide the premise behind Freud’s Dora and Frangello’s My Sister’s Continent. Frangello takes Freud’s idea of the dream as ultimate fragment of a person’s pathology—a text that must be deciphered—to a delightfully compulsive interpretation. Frangello’s novel, like Freud’s Dora, reveals itself in front of and between a series of dreams. Freud poses two dreams, and Frangello offers three dreams (though the third dream is presented as an E.L. Doctorow quote). Rather than Freud’s one “perverted” Dora, Frangello offers two pathological sisters: the understated and repressed lesbian, Kendra (the official Dora narrator), and Kirby, her eating-disordered/sexually-masochistic, heterosexual, ballerina twin.

In terms of Frangello’s narrative unraveling of hysteria by twin journeys, we need only turn to the final chapter in Freud’s Dora. In Freud’s master narrative, he lists nine conditions presented by the inflicted female patient—most of which serve as Freud’s prospectus on how bisexual desire produces a syntax of hysterical “phantasies.” Lidia Yuknavitch’s story, “Loving Dora,” in her story collection, Her Other Mouths (1997) mines a prose re-perversion of Freud’s Dora. Like Frangello, yet in narrative “language poetry” echoes, Yuknavitch understands the puns and possibilities of Freud’s obsessive linguistic-poetic archive of hysterical construction (Yuknavitch—coincidentally or not—is Frangello’s publisher).

Frangello, while reminding us Freud’s hysteria still exists in a nice Suburban Chicago family, has no interest in healing or redeeming the bulimic dancer, the guilt-ridden goody-goody lesbian, the heterosexually sadistic adulterer/University of Michigan educated law partner, or the alcoholic father. Rather, Frangello (the seduction theory reporter) just lets the family dramas take off their clothes and exchange body fluids.

Removing Frangello’s work entirely from a Freudian doppelgänger, I recall Charles D’Ambrosio’s stories in The Dead Fish Museum (2006). He intimately details the relationships and bodily destruction of depressive, manic-depressive, and personality-disordered individuals who, no matter how marginalized, like everyone else, love and betray loved ones. The ultimate task of the fiction writer is to apprehend human muck without obligation to redress fatal character flaws (imagination need not tape itself to salvation). Gina Frangello, because she respects both conventional and subversive novels (and case history protocol), displays maturity not usually found in first novels (too many of which are soporific—across gender/race/class perspectives—teenage coming of age stories). Frangello resists boundaries between erroneously labeled experimental literature, and storytelling too easily gagged by routine realism constraints.

Elizabeth Block is author of the novel A Gesture Through Time (Spuyten Duyvil). Also a filmmaker, she is currently writing a narrative feature film.

By most measures, Bush Tetras are not an emerging outfit. Formed in 1979 in Lower Manhattan, the original iteration of the band lasted only three years. During that time, they helped pioneer a hugely influential style of dance-oriented post-punk, sometimes described as “mutant disco,” that simultaneously emerged on both sides of the Atlantic.