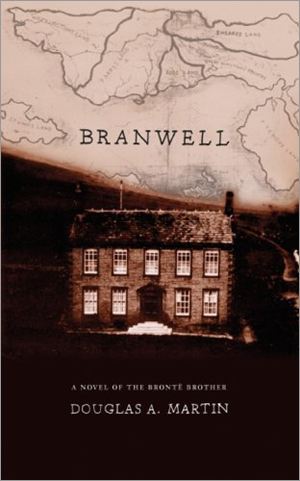 An understandable mystique surrounds the Brontë household. From the small parsonage of this close-knit family, nestled on the windswept moors, would come three of the nineteenth century’s most acclaimed novelists: Charlotte, Emily, and Anne Brontë. Their books made the name Brontë synonymous with a certain kind of passionate isolation, and even the titles (Jane Eyre, Wuthering Heights) evoke a dark and powerful landscape tense with desires denied. The aura of mystery created by these women’s short lives and tragic deaths is amplified by their bond as siblings. Yet another sibling shared that bond as well: Patrick Branwell Brontë, who failed as spectacularly as his three sisters succeeded, and who in 1848 would die of consumption after a long and shattering decline into alcohol and opium abuse. In Branwell, his luminous, cameo-like new novel, Douglas Martin (Outline of My Lover) pays homage to this unlikely subject, creating a moving and evocative portrait of a boy doomed to enter history as a sad footnote to his sisters’ lives.

There are dangers in writing historical fiction of finding details more interesting than characters, of surrendering to the inevitability of what has already happened and in doing so forfeiting the element of suspense. Fortunately, these are dangers that Martin avoids. Branwell is not a novel about a particular time, or place, or set of circumstances; it confines itself almost claustrophobically to the emotional details of one life and in doing so creates a world that is both intensely personal and remarkably transcendent. The nineteenth century Yorkshire depicted here feels as close and immediate as the present day. There is nothing exotic in the people or locales depicted, and Branwell’s gradual downfall is achingly familiar and emotionally real. At the same time, the prose here is so finely wrought that the novel has an otherworldly feel. Rather than commit to a straightforward narrative, Martin communicates Branwell’s story in brief anecdotes that are as blurred and fragile as dreams. These anecdotes traverse the fantastic worlds of the Brontë children and the cruel disappointments of adult life in equal measure, and without distinction. The effect thus produced is profoundly beautiful.

This kaleidoscopic structure does not, however, lend itself very easily to straightforward storytelling, and the one area in which Martin seems to falter is in conveying the less-than-poetic stuff of everyday history. Little actual information manages to break through the novel’s vague, poetic fugue. Events and personages come and go without explanation, and a reader who does not understand the unelaborated references to the Brontë sisters’ various literary attempts, to their journeys and infatuations and failures, might find the novel overly cryptic. Likewise, no clear map (temporal or otherwise) is provided upon which to chart Branwell’s hazy, impressionistically described wanderings. What seems to be the novel’s most central episode, in which Branwell is dismissed from his post as tutor to a boy with whom he has possibly fallen in love, is also its murkiest: allusions, euphemisms, and fantasies combine in a way that is lovely and sinister, yet also totally baffling. It could be argued that this mysteriousness has its merits, contributing as it does to an overall atmosphere of darkness and uncertainty, but at times one wishes for a little less lyricism and a little more clarity.

Yet ultimately, such criticisms are futile. Branwell is not a history, relating an objective chain of events, nor in any sense a biography, attempting to shed light on its subject. Instead, it invites the reader to join Douglas Martin in his dream of Branwell Brontë—a dream so enchantingly and hypnotically rendered that the invitation is a pleasure to accept.

K.M. Ferebee is a writer based in Bronxville, NY.

Chloë Bass’s The Parts, organized by the Brooklyn Public Library’s curator for visual art programming Cora Fisher outside the Central Branch in Grand Army Plaza and the Center for Brooklyn History in Brooklyn Heights, addresses both the isolation brought on by the pandemic and the trauma and exasperation of Black and brown Americans brought on by police killings.

The glass and steel material content in Sleep Close and Fast bespeak the disinfecting wipe-downs that businesses, including galleries, perform with regularity. The artworks advertise sanitation, a less comforting quality than it may seem.