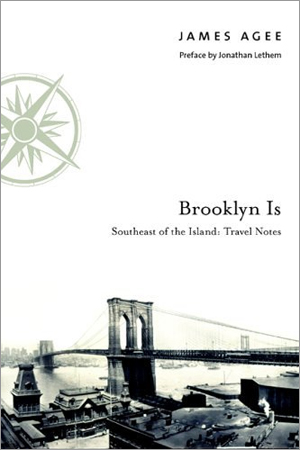 In 1939, the writer James Agee moved to Flatbush to work on a magazine article about Brooklyn. By then, Agee was an established figure in New York’s literary left, and he was on assignment for Fortune, which at the time was one of the most liberal magazines in the country. But his story, like the text that would become his 400-page epic about Alabama tenant farmers, “Let Us Now Praise Famous Men,” was rejected by his editors for creative differences. It recently surfaced for the first time in book form as Brooklyn Is: Southeast of the Island: Travel Notes.

Agee, an obsessive drinker and smoker, liked to stand all night outside his apartment, bottle in hand, and engage in conversation with anyone who passed by. (He would drink and smoke himself to death, in 1955, at the age of 45. Two years later, he was awarded a Pulitzer Prize.) He was also a restless wanderer, and strikingly successful in uncovering America’s Brooklyn, its neighborhoods and its people. “There seems almost no conceivable end to Brooklyn,” he writes. “It seems, on land as flat and huge as Kansas, horizon beyond horizon forever unfolded, an immeasurable proliferation of house on house and street by street.” He explores the “wood tenements, bare lots and broken vistas” of Depression-era Greenpoint and Bushwick. He gets himself invited into an exclusive home in Brooklyn Heights, where his hosts worry about the “Syrians within two blocks of us.” He walks the still-busy docks, where Chevrolets are being shipped to Peru. In hypnotic passages, he lists graffiti from around the borough. “Dominick says he will Fuck Fanny” is scrawled on an iron door in Williamsburg. In Park Slope, a chalked message in Palmer script reads, “Lois I have gone up the street. Don’t forget to bring your skates.”

Like E.B. White’s “Here Is New York,” written a decade later, Agee’s text is a somewhat awestruck attempt to capture the spirit of a place. But the books could not be more different in temperament or style. Agee is disorderly where White is polished, agitated where White is effortless. At his best, Agee is rhapsodic. But at times he becomes sentimental and overwrought, and, occasionally, stricken with rage. His seething contempt for a “too-well-born young man not long enough out of Harvard,” a journalist who takes him on a drive through Bay Ridge, Coney Island and Sheepshead Bay, can be offputting. The most vivid scene in the book takes place at the posh home in Brooklyn Heights. His hosts are racist snobs, but Agee, self-righteous, maliciously taunts them as they serve him dinner, and comes off little better. And Agee’s own politics don’t always date well, despite his admirable intentions. Throughout the book, he is given to describing the poor as pure and sensual: noble savages.

For all this, the book is startlingly beautiful. It ends with a visit to Prospect Park on a Sunday, where Agee watches a father holding his children’s hats as they play, a young man who “genuflects before a smiling girl in a gold blouse,” a couple holding each other so tightly they stumble like drunks. Faced with this preponderance of life, Agee is overwhelmed. He is like the old woman who sits alone in the park, “intensely watching everything in sight and in silence the tears run freely down her face.”

Jen Itzenson is a writer who lives in New York.