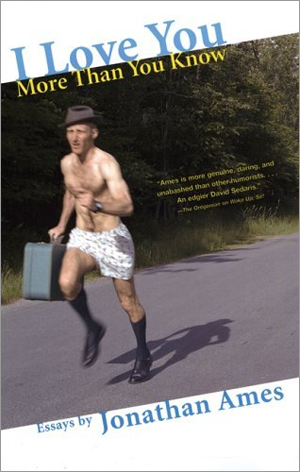 Jonathan Ames’ ass itched for 15 years. Then, one day, he learned that athlete’s foot powder when applied to his rear cured him of his itchiness and wrote about it in his regular column in the New York Press. Shortly afterwards, he received an email from a reader asking him if he was telling the truth about the powder. He assured her he was, so she recommended the treatment to a friend of hers who suffered from the same itchy-ass condition. The friend was instantly cured. And ever since—the woman tells me after a reading of Ames’ new book I Love You More Than You Know (Black Cat, 2006) this February—she has been a devout fan. Everyone has a weird story to tell about Jonathan Ames.

Add to that all the weird stories that Ames tells about himself in his non-fiction books and columns. Like the time he stuck a fork through a hot dog and held it in front of the crotch of his pants and shouted, “Oh, no! I forked my wiener!” to amuse his teenage son. (That story is appropriately titled My Wiener is Damaged!)

Or the time he was overtaken by Jewish survivor’s guilt while making out with a German tourist in front of the Holocaust Museum in Battery Park. “The museum wasn’t happy with my behavior,” Ames explains in The Thick Man. So he spanked the woman on her buttocks. “Is this better? I asked [the museum], silently, in my mind. I figured that corporally punishing a German had to give the museum some solace.”

If you only read these roll-on-floor-laughing stories in Ames’ new collection, you might get the impression that Ames is this funny guy—a thinking man’s clown who writes self-deprecatingly about his bawdy sex life to get a laugh and set people at ease. The kind of guy you want to invite to any gathering because he’s going to be the life of the party, re-enacting his old fencing maneuvers and demonstrating how he managed to scald his testicles while sitting in a bathtub.

But Ames isn’t just a funny guy. There is—as with Nick Hornby, his fellow ‘bloke lit’ author—actual substance behind his lightweight style. Hornby has managed, in his books, to string together easy-to-digest philosophy lessons out of mass suicide attempts and the earnestness of do-gooders. Ames has set himself the harder task: doing the same with more commonplace deeds like finding a cockroach in his bathtub or getting turned on by a French hooker wearing cat’s-eye spectacles.

The first clue to Ames’ deeper side is revealed to me when I meet him for the first time and discover that he’s shy. He turns up for a reading at Bookcourt, his favorite Brooklyn bookstore, to promote his latest collection of essays written between 1998 and 2005, and he’s nervous.

This is Ames’ sixth book—not including the anthology Sexual Metamorphosis: An Anthology of Transsexual Memoirs, which he edited. He has been on book tours to Europe and throughout the United States. He has been on the Late Show with David Letterman several times. And yet, the man is palpably jittery as if this standing-room-only crowd of adoring fans might actually find his new book unappealing.

His nervousness is the first giveaway. Second is the fact that Ames is concentration-camp-thin in his jacket and shirt, with sunken eyes that seem bloodshot even when they’re not. A fan once told Ames that he looked like the robots in the Will Smith movie I, Robot and it’s true: he does have the same skeletal, android look. He also looks like he might have irritable bowel syndrome. He does not look funny.

Few writers today flagellate themselves as much as Ames does in his non-fiction writing. He is ruthless in exposing his transgressions, of which there have been many. And, in talking about the worst in himself, Ames brings out the best in us. His one-man mission is not just to get us to lighten up but also, Christ-like, to release us from the weight of our sins. He makes us realize that (compared to him) we’re paragons of virtue.

Ames admits that there was a period when he tried to do a Bukowski—writing explicitly about his sex life in order to get women turned onto him—and several of his stories seem to reflect this strategy. “If I put in my stories my profound appreciation of women’s rear ends, legs, breasts—hell, the whole body!—and my desire to lick women everywhere and mount them from behind, then women would gobble this stuff up and I’d get laid just like Bukowski,” is his plan in Self-Sentenced, one of the essays in his book. So he shares with us his various sexual misadventures such as the time he winked at an eight-year-old girl in a playground or the time he had an erection while slow-dancing with a famous actress on camera.

But then, in some gems of stories tucked away in this new collection, Ames reveals the wounded heart behind his clown-like demeanor. In the essay that gives the book its title, Ames writes about his frequent visits to his great-aunt Doris—whose parting line to him is always, “I love you more than you know.” His own love for her is patently clear. “[As] she gets older,” he writes, “especially of late, as she becomes more feeble—my love seems to be picking up velocity, overwhelming me almost, tinged as it is with panic: I’m so afraid of losing her.” This revelation isn’t embarrassing or shameful. It’s poignant and touching, and for once, we are actually able to directly identify with Ames without flinching.

But if his love for his aunt is suffused with panic, his love-stories to his son are full of peace. Ames listens to Kurt Cobain with his son, goes hiking with him, fools around with him like he’s his big brother. When he writes about his son, a different voice takes over the page. These stories are written with a calm that’s missing from the frenetic pace and self-disparagement of most of Ames’ other stories. In these stories about his son and his aunt, we get to see beyond the humorist to the talented writer secure enough not to need to be funny all the time.

And finally there are the stories about Ames’ lover.

“I’ve been crying for the last hourâ¦listening to the mixed tape that my love made for me,” he writes in Our Selves Between Us as he describes the first painful months of his break-up with his girlfriend. “[The tape] made me think of the two of us sitting there, trapped, our selves blocking us from being able to love, the way all selves block all love. How do you get past the self?”

Ames shows us how to do that impossible task through this assorted bag of hilarious and touching tales that bare his soul and reveal his tender, bruised heart. He calls his life an “Icarus path, one of flying too close to the sun.” Through Ames’ stories, we get to experience the Icarus life as well but from the safety of our buttoned-down lives. For all of us, he flies close to the fire.

Anju Mary Paul is a cultural reporter based in New York City.