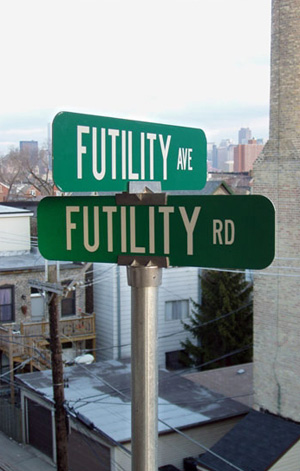 Well Read, curated by Christopher Howard and currently showing at Nurture Art in Brooklyn, aims to explore “the cognition and understanding of visual signs.”

This is no small task to say the least.

The notion that a work of art is itself a nexus of meaning, or as Sherrie Levine has written, “a tissue of quotations drawn from the innumerable centers of culture,” has prevailed in the air of Art Theory classes for decades, but sometimes seems lost as a guiding practice in the art world at large. Christopher Howard admirably takes on the task here of demonstrating from all angles the potential of an engaged art/artist/viewer relationship to interrogate the meaning of text.

The intentions of the forbearers of this type of thinking, such as David Lamelas, Robert Barry, and On Kawara, to name a random few, are not easy to circumscribe, precisely because the spirit of this tradition is based on a desire to “explode” meaning and to examine its pieces rather than to establish stylistic consistency.

Well Read, to its credit, picks up these scattered pieces and examines them where they fall on the contemporary landscape. The impossibility of assigning a general label such as “word art,” “theoretical art” or “conceptual art” to the work in the show testifies to its success.

Howard’s overall evenhandedness precludes a focus on a single work or artist. Nicholas Knight’s wall graphics comprising “Intangible (Cézanne),” however, stand out as the visual centerpiece of the show, if only in terms of scale and positioning. His mural-sized, dissected sentences from Cézanne’s writings branch through a flow chart of linear pathways of black tape. Though the logic of the sentences is fractured, the words condense into a poetic, abstract impression of the original text.

Nearby, in a cheekier tone, stands “Intersection,” a pathetically apocryphal street sign by Gabriel Fowler that marks the intersection of “Futility Ave” and “Futility Rd.” “Intersection” looks isolated and disembodied from its fictional location as it humorously objectifies the coordinates of an intangible, emotional domain.

Beth Campbell similarly reifies the abstract with her confessional drawing, “My Potential Future Based on Present Circumstances.” The drawing is simply a detailed flowchart of contingencies emerging from a single, seemingly insignificant event. Her hypothetical future unfolds nervously down the face of the paper, with everything from art stardom to early liver failure waiting at the bottom of the page as possible outcomes.

Because the verb “read” and not the noun “art” governs the direction of Well Read, the work in the show is wildly diverse in appearance without compromising the conceptual focus of the exhibition.

For instance, Heidi Neilson’s “Collapsed Borders” might appear simply as a tasteful collage composed from the torn pages of atlases; however, in the context of this exhibition, the formal possibilities of the piece are subverted by the textual significance invested in the maps themselves. It is compelling to note that, hanging close by, an otherwise unrelated zinc etching of the words “Something Beautiful” by Stephanie Brooks finds conceptual accord with Nielson’s collages by reasserting the focus on reading rather than looking.

Matt Siber’s “Untitled #21,” a set of digitally manipulated photographs, is more of what one might expect from an exhibition involving the reading of signs. On the left, a photo depicts a fuel station and its surrounding commercial real estate, but stripped bare of all text and logos. The accompanying panel on the right represents the removed logos in black against a white background. The street scene appears eerily naked and unfamiliar, while the crowded white field on its right illustrates the prodigious volume of branding and textual instruction that is not-so-subtly embedded in our urban landscape.

Befitting the theme of the exhibition, Stephanie Brooks and Heidi Neilson also contribute actual books to the show. Brooks’ Love Songs (My Contributions to the Genre) puts a musical score to Freud’s Pleasure Principle and Heidi Nielson’s distillation of classic novels for their punctuation marks brings to mind social anthropology experiments that study cultural movements by quantifying word and grammar usage. Nielson’s letterpressed pages scatter question marks and semicolons culled from the prose of novels such as To the Lighthouse and 100 Years of Solitude. Her experiments recall, in less clinical terms, the sociological art investigations of Hans Haacke and Gordon Matta Clark.

A lot of work in this exhibition seems to thrive within the context of Howard’s impressive curatorial vision. The work is so well chosen and the theme so responsibly treated that it is a disservice to summarize the art merely as an attempt to characterize the show itself. Taking nothing away from the individual pieces in Well Read, the show as a whole rises above its component parts.

The notion of examining, indeed “reading,” artwork as signs or commentaries of the same is as important as any idea in art today. These sentiments have guided our collective attitudes about the practice of art making for decades now, and have decidedly moved us away from the supremacy of the object and the acceptance of absolute meaning. Without occasional reevaluations, though, the idea itself risks being victimized by the same forces that it challenges. Well Read stands as a well-conceived and much needed offering about the nature of interpreting meaning in the contemporary art world, and needs to be viewed in person, not just read about, to be truly appreciated.