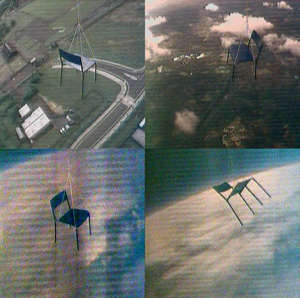 Parker’s Box provides a glimpse of very recent European video (all from 2005) with Videodyssey, an exhibition also staged at the PULSE art fair and, in a different version, at Galerie Anne Barrault in Paris. The five artists represented here tend to indulge in spectacle and whimsy even when dealing with such topicalities as cultural representation, militarism and religion—an approach that seems a far cry from the self-obsessed body politics of many of their American counterparts.

Jordi Colomer’s Arabian Stars was shot in Yemen, where the artist placed placards inscribed with names like Minnie Mouse, Picasso, Bruce Lee and The Ramones, handwritten in Arabic, in the hands of its citizens. The video consists entirely of these ordinary persons carrying their signs through city streets, across stretches of desert and along a windswept highway. The piece is absurdly overlong, which, for the patient viewer, is the source of its humor; one extended take after another, set against timeless landscapes or sumptuous vernacular architecture, compounds the ridiculousness of the juxtapositions, leaving us to contemplate not the remoteness of Yemen, but rather the provincialism of our own Western experience.

“Well, that is what everybody thinks of us militaries” by Agnieszka Kalinowska is primarily a monologue by a woman in a military uniform musing on the joys, skills and risks of her chosen profession. The video’s minimal production values and the airy generalities of the script feel somewhat slight and confounding, although injected in spots with unexpectedly clear-eyed poetry. Jason Glasser’s animation Lion et Oiseau is also slender in its means and content, but it doesn’t seem to intend to be any weightier than the fanciful black-and-white creatures collaged against its oddly attractive wheat-yellow backdrop—a two-legged lion, a headless ox, an apparently intact pigeon and a unicorn—all moving with a halting, childlike gait to a catchy electric guitar score.

The punchiest videos in the show are also the ones based on the simplest ideas. For The Jesuses, Patrick Martinez compiled hundreds of reproductions of the Crucifixion and Deposition, mostly from Renaissance sources, and eliminated everything except the body of Christ. He then placed the cutout images against a black background and sequenced them, one per frame, into the film. The resulting animation is a mad, beautiful, agonizing dance that ends only when the body descends from the invisible cross, writhing like Warren Beatty in the bloody climax of Bonnie and Clyde, and then falls prostrate for a split second before disappearing altogether.

And Simon Faithfull’s Escape Vehicle no. 6 focuses on a simple metal frame chair—the kind you’d find in a cafeteria or convention hall—tethered to an ascending weather balloon. The chair seems to beckon you to take a seat even as it spins wildly at the end of its cable, its image growing grainier as the unseen balloon rises to an altitude of 30 kilometers, where the curvature of the earth is plainly visible. Acrophobes need not apply; the quotidian familiarity of the chair and its primeval promise of rest and comfort, combined with the fantastically vertiginous heights that it flies across, seem to violate some basic and very personal sense of security. The video feels like a fever dream in which you discover that the floor has suddenly vanished from beneath your chair, and before you know it, you’re clinging for dear life at the edge of the atmosphere and praying that gravity isn’t all it’s cracked up to be.

New Soul is Erik Parker's second exhibition with Mary Boone. Once again we may experience the artist's penchant for bright flaming colors and zany surfaces.

Universal Tonality: The Life and Music of William Parker

The unofficial “Mayor of the East Village” is arguably the Mayor of Free Jazz; as a collaborator and bandleader, he is the literal connection between Cecil Taylor, Matthew Shipp, Cooper-Moore, Susie Ibarra, Leena Conquest, Amiri Baraka, and many, many others.