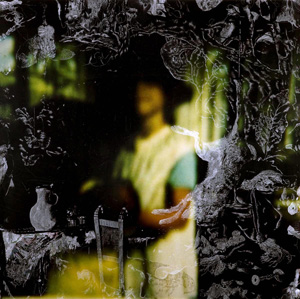 Sebastiaan Bremer, “Self Portrait in Studio,” Courtesy of Roebling Hall.

Some speak of the ambling “figure eight,” a disinterested gallerygoer makes when entering an exhibition en route to quickly exiting. More polite disapproval for an art exhibition is sometimes signaled by a perfunctory behind-the-back-hand-clasp shuffle around the gallery before a swift departure.

Sebastiaan Bremer, on the other hand, inspires a response that is increasingly rare from art junkies and casual observers alike. Viewers study his richly embellished photographs with a marked curiosity, approaching and retreating from their surfaces with furrowed brows, craned necks, and busy legs. Aside from the patch of floor in front of Georges Seurat’s “Sunday Afternoon on the Island of La Grande Jatte” at the Art Institute of Chicago, seldom do you see such kinetic interaction with an artwork hanging on a wall.

Bremer’s work engenders such interest by creating a delicate balance between the macro and micro events in his compositions. Beginning with dark, clouded, or otherwise obscured images on large-scale photographs, he carefully redefines the lost detail and adds new content to their surfaces with dots of contrasting ink. The end results are compositions that range from pictorial ambiguity to exacting precision depending on the vantage point of the viewer.

The selection of work included in his current exhibition at Roebling Hall’s new Chelsea space vary in their levels of initial abstraction. Two images, “Zwemen” and “Black Diamond,” are immediately recognizable from a distance. “Zwemen” depicts a submersed swimmer in the emerald water of a swimming pool, and “Black Diamond” features a snow-lined valley as seen from a mountain peak. The contours of each photograph’s subjects are wrapped in girdling matrices of ink specks that serve more as supplements to the photos than as integral components.

The remaining pieces in the show deliver a more profitable standoff between their general and specific information. “Self Portrait in Studio” features a ghostly image of the artist in his studio, reminiscent of a Rembrandt self-portrait. A closer look reveals a mesmerizing network of white ink dots describing an interior setting furnished with all the accouterments befitting a Baroque genre painting.

Dutch by birth, Bremer appropriately turns to such native sources for inspiration, but, while the art historical references beg for a biographical or symbolic reading of his work, its visceral power lies in its compositional inventiveness and technical complexity.

Accordingly, “Still Life With Portrait” quotes from Dutch still-life painting. The overall abstraction of the underlying photograph suggests an image of deep space, with gaseous constellations swirling around a radiant yellow hotspot in the top center of the photo. The details suggest a more terrestrial setting, however. Emerging from the foreground are the remnants of an interrupted banquet, foliage, and a skull, all described in fastidious detail by Bremer’s signature dots.

Dutch Baroque painters are often given credit today for their technical and optical innovation, but in their own time they were preoccupied with spelling out moralizing lessons in symbolic terms. Bremer assumes a similarly mixed responsibility in his references to their art.

“Day for Night” develops in line with these competing interests. The piece appears from a distance as a dark, abstract, Whistler-esque Nocturne. A closer study of its surface, however, reveals memento mori similar to the latent imagery of “Still Life With Portrait”—unfinished food, empty vessels, and a skull. The effect strategically and successfully balances soothing abstraction with forbidding detail.

Bremer’s work is full of gifts, some easy, and some hard-earned. Subtle art historical references mix effectively with his own inventive method of art making. The rewards of the hidden imagery alone are worth the time it takes to search for them. However, in the end, the vertiginous interplay between the foreground and background that keeps one’s eyes bouncing and feet peddling in front of his work accounts for its universal and lasting impact.

These photographs summon the ghosts of the Strait of Hormuz, alluding to the psychic energy that lies beneath the sediments of the arid islands. These are perceptive portraits of men and women who appear undeterred by the harshness of the environment and its various elements, outwardly confident in a centuries-old ability to weather such forces.

Julian Schnabel: The Sad Lament of the Brave, Let the Wind Speak and Other Paintings

Despite the undeniably heroic scale and boldness, the paintings have as much to do with self-effacement in the circumstance of unknown experience as an adventure or foil, a falling into form and a finding of balance however precarious, or transitory.

What We Cannot Speak About We Must Pass Over in Silence

Art manifestos often propose themselves as solutions to aesthetic problems—aping philosophical or religious tracts, mathematical proofs. But the resulting language is typically merely fatuous and should be set as far aside from art as possible, relevant only for the purpose of scholarship.