Where Lines Are Drawn
The Front Room 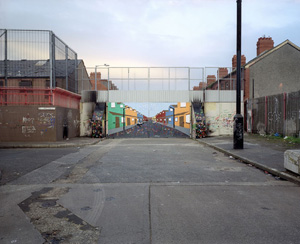 On the face of it, a series of formally rigorous, symmetrically composed and impeccably printed architectural photographs wouldn’t ordinarily be described as heartbreaking. But the subjects of Sean Hemmerle’s Where Lines Are Drawn, at The Front Room through April 2nd, are the US/Mexico border fence, the Israel/Palestine security barrier, the Green Line in Cyprus, the Peace Wall of Northern Ireland, and fragments of the Berlin Wall. As Hemmerle observes in his notes accompanying the show, “These fences and walls…are flash points of ideological schisms that, once deemed intractable, are made concrete.” If war is the ultimate failure of the human spirit, these barriers, erected in the name of peace and security, run a close second.

The exhibition opens with a large-scale C-print of Nogales, Mexico. Taken from a high vantage point, the promised land of Arizona looms on the horizon. Its sloping mountainsides are raked by twilight, and gleaming white shopping malls and housing developments dot the foothills at the far end of a broad, scrubby no-man’s-land. This postcard-perfect vista is ruptured by “La Linea,” the hideously cobbled-together border fence, where a shantytown huddles hard by its rusted corrugated steel panels and barbed wire. “In each location, the Line I have visited spawns blight,” Hemmerle writes. “To live adjacent to one of these divides means to live with the constant threat of violence on devalued real estate. Many such homes are abandoned or destroyed. Neighborhoods falling within the route of these interfaces are often forgotten.”

And so it is with Nogales. During a chance conversation I had with the artist, Hemmerle described the costly cat-and-mouse game that the coyotes, or immigrant smugglers, play out of this desolate neighborhood. Both sides, the coyotes and the US Border Patrol, know where the holes in the barrier are—who gets through and who doesn’t is entirely a matter of cunning, diversion and luck. The price of passage escalates by the thousands depending on the destination—top dollar will get you to Tucson, a reduced rate will land you at the McDonalds in Nogales, while the poorest of the poor are dropped off in the desert on the other side of the fence, where they are invariably picked up by US officials.

If a security barrier is often a prospect for exploitation and corruption, it can also be a site of populist defiance. In another large C-print, a graffiti artist has painted a mural in the style of Diego Rivera on an enormous steel gate surrealistically bisecting a Juarez railroad trestle. The mural’s enigmatic imagery includes a satanic overlord holding a chain above his fallen victim whose hand stretches down toward a crowd of machete-wielding workers gathered below. In the sky above, the artist has painted a suspended I-beam emblazoned with the word “MIGRA.”

At a Belfast intersection ravaged by firebombs, a mural adorns another forbidding steel gate—this time depicting, in the bright, blocky vocabulary of a schoolchild’s art project, the streetscape hidden on the other side. Hemmerle merges the three-dimensional elements of the intersection into the mural’s single-point perspective with such a degree of perfection that the gate vanishes into the unbearably melancholic lightness of the painting’s illusion. The words “Love Thy Neighbor” are brushed in white over the poster-color blue of the sky, a commandment that would seem cynically fatalistic if not for the multicolored handprints pressed against the gate’s steel surface—symbols of a tender yet impotent yearning that ultimately reassert the barrier’s imperviousness.

The international range of Hemmerle’s project affords the viewer a sense of the cycles of post-WWII history manifested on the walls. Like any untreated wound, these gashes across the psychological, social, political, and geographical landscape tend to fester long and ugly before they scar over. With any luck, as younger generations succeed their embittered elders, the walls will recede into embarrassing relics from an unenlightened era. In Hemmerle’s photos of a brightly painted fragment of the Berlin Wall, now a tourist attraction, or of the self-consciously named Berlin Café near Checkpoint Charley in Nicosia, Cyprus, the political absurdities that created these divisions seem to have excreted to the surface in the form of a theater of the absurd.

But the most disheartening folly of all is the willful amnesia and cynicism of governments that lead their populations to believe safety lies behind fortress walls. Nowhere is this more evident than in the L-shaped, gray concrete slabs designed by the Israelis for their border with the Palestinians. Their striking resemblance to the Berlin Wall seems too close to be coincidental. The mordant irony of the situation is not lost on Hemmerle, who hangs two large photographs side-by-side: one of the barrier at the Palestinian village of Abu Dis; the other of the Berlin Wall Memorial at Bernauer Strasse, where the most escape attempts to the West took place. The two barriers are virtually indistinguishable.

In a corner of the gallery, there’s a small photo showing a high concrete wall, complete with watchtower, rising above an olive grove in Bethlehem, the traditional birthplace of Jesus. The image brings to mind the medieval city walls of the Middle East and Europe—astounding feats of engineering as well as stunning works of architecture that were built with a communal sense of purpose to preserve lives, property, and a highly sophisticated, unique culture. The rank, corrosive ugliness of the modern barrier wall embodies the pessimism, shortsightedness, mistrust, racism and xenophobia that brought them into being: a metaphysics of moral surrender.

Nothing is obvious—there is no face, rather a series of brushstrokes fill in for a face, itself flanked by a flurry of criss crossed marks motioning the wind of a wing otherwise invisible on either side of the central form. There is something deeply mysterious and poignant in the immediacy of Lewczuk's Angels.