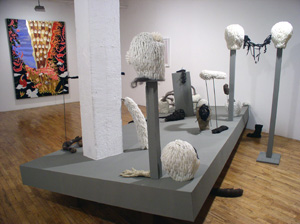 In light of so many group shows with clunky, overdetermined themes, it’s refreshing to find one as resolutely vague as Possibly Being. Not only is the commonality among its three artists left unstated, whether it exists at all is a dubious proposition. This suits the participating artists well; they all demonstrate a cagey resistance to definitive statements and unitary practices, operating instead with a liberating embrace of contingency.

Larry Bamburg’s three installations appropriate basic workaday materials for phantasmagoric tableaus. “Dead, Fresh Dead, Frozen” features a cut-out photograph of a dead deer on an irregularly-shaped platform of gray institutional linoleum floor tiles. Tiny bits of knotted wire, suspended from a ceiling fan by strands of monofilament, dance jerkily a few inches above the photo like a swarm of insects descending on a carcass. The scene is expanded to life-size in the back room of the gallery, which the artist has outfitted with too-bright fluorescents, the same gray linoleum and a giant, slowly-rotating fan. The microscopic faux insects hanging from the fan’s pulley system circle the room in a galaxy-like orbit, evoking a severely bad day at the office. Bamburg adds lots of smart, quirky touches to these works, like obsessively painting the masking tape over the fans’ extension cords to match the gallery’s wood floors.

“After the Storm,” a wall painting by William Villalongo, combines discreet figural elements with an episodic panorama. Filigreed black velvet and gold leaf shapes, severed fingers, tree branches, hearts, and eyeballs float in a fragmentary oceanscape, coalescing into damaged quasi-organisms. This gleeful Frankensteinianism is elaborated in a small wall-mounted sculpture of a mutant horse-lady standing in a field of tiny plastic flowers and carrying severed heads on chains. Additional appendages sprout from her back: praying hands, a boar’s head, a black nun, a white monk. Villalongo often masks violent elements in his work, like the bleeding, fist-sprouting Picasso-esque head in “His Eye Is on the Sparrow,” with a bright palette and easy-on-the-eyes materials. The visual pleasure offered to the viewer quickly turns into unrest, and vice versa. The flexibility of Villalongo’s practice shows an artist willing to try any number of possibilities, both new and deeply rooted in tradition, to represent an increasingly bizarre world.

Fabienne Laserre’s large sculptural installation “The Others” presents itself like a display of ethnographic objects at a natural history museum. A raked gray platform supports a group of head-like sculptures made of white fake fingernails, gray felt, braided hair and unidentifiable, embedded organic matter. Some are on small pedestals sprouting smaller sub-sculptures from their bases. One felt object extrudes appendages that travel under the platform and pop out the other side, like dust bunnies left to thrive by a careless museum staff. Two thoroughly worked mixed-media drawings, consisting of vertical pencil marks overlaid with watercolor and pastel, suggest Arshile Gorky or Pavel Tchelitchew in their shallow space and close-up fragments of nature. They feel full without being obsessive in a way that many contemporary abstract drawings don’t. Proceeding directly from her sculpture, Laserre’s drawings round out an engagement with surrealism and mysticism that’s free of the buffering sense of irony that dilutes many similar projects.

The three artists in Possibly Being demonstrate workable models for moving forward conscientiously, employing art history without bogging down in it. They suggest that the desire for clarity in art is often a hindrance to its capacity to form new statements, and that part of being an artist (or, for that matter, a viewer) is the ability to entertain ideas at the level of the potential rather than the actual.

The Immeasurable Unseen: All Light, Everywhere

Theo Anthony's absorbing sophomore feature shines a light on the symbiotic relationship between camera technologies and social control, effectively scrutinizing our ideological conceptions of the visible and the invisible, observer and observed.