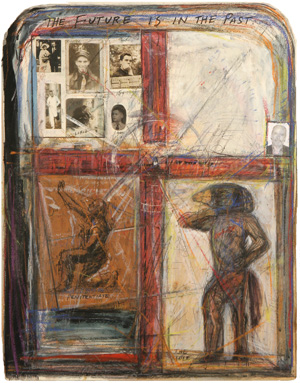 1925: First Birth in Detroit. Comes to New York in 1947. “What was there in Detroit for a seventeen year old surrealist?” Considers becoming a saxophonist. Chooses to pursue painting.

James Harrison’s first body of New York work resembles the collage and scribble drawing style of Rauschenberg and Twombly. Like them, Harrison presented the marks, beautiful in themselves, as evidence of process; unlike them, he remained faithful to image. In the “Face Furniture” series, the likeness of whomever or whatever is looking back at the viewer became Harrison’s main theme. He would later tell me that painting was knocking on one’s door to see who answers. “Face Furniture” refered, with a tinge of sarcasm, to Harrison’s growing up in suburban Detroit; the semi- architectural floor plan of post-war conformity was a “mask.” The mask and the identities it concealed were to become his obsessive subject.

Throughout the fifties and sixties, Harrison worked as a color mixer and designer for a textile business. His circle included James Baldwin and the photographers Doug Quackenbush and Larry Clark. Titles of this period include “Spectral Self Portrait” and “Flying Tiger Mouth.” He saw Marcel Duchamp on the street and would later tell me, “He’s the greatest alchemist of the 20th century.” He deepened his knowledge of Blake, Jung, European art history, Buddhism, poetry, and jazz, and was photographed in a thoughtful pose in Ad Rheinhart’s studio.

Harrison had been a devotee of jazz back in Detroit, especially of Coleman Hawkins, Lester Young, and Louis Jordan. New essential influences were the poetry of Rimbaud and Surrealism. Improvisation was the method of the time and anything that freed the hand and mind to be spontaneous was welcome. Before sex, drugs, and rock ‘n roll, there was sex, drugs, and jazz. In all three Harrison pursued a polymorphism and a polytheism. Multiple identities was the rule. Harrison used amphetamine, creating a body of drawings in which the pencil lead holds the paper together, so densely are they worked. Not only is the pencil the most economical of tools, lead is the element of Saturn. While Twombly and Rauschenberg would ascend into the sunlight of success, Harrison would descend into alchemical nigredo—a lonely, isolated, dark time. The images of the “speed drawings” (his term) emerge from flickering lights and black blacks, not unlike Pollock’s late black and whites. The viewer participates in interpreting the image and is invited to free associate. Image is not a thing, but a story.

1975: Second birth follows recovery from alcoholism. Works on paper become dense webs of layered images. Portrait of the Artist as a Young Bouquet, Dionysus Born From the Thigh of Zeus, I Am Brought Forth Between the Pillars. Wonders why AA meetings take place in church basements.

Drawing was the basis of Harrison’s art. He called his work “painting-drawing.” The painters of the sixties he respected most were Guston and de Kooning, artists for whom drawing was also central. He differed, though, in that he did not raise an altar to doubt as they did. His hero was the emerging Self, an archetype, a metaphor. He read Jung, not Kierkegaard, agreeing with the former on the subject of the existence of God, “I don’t believe, I know!” Nor did he wield the brush that they did. He stayed European, more akin to Giacometti than the American painters. The modernist abandonment of the figure was simply never Harrison’s concern. The vertical human figure was his totem; Cezanne’s solitary male “Bather” in the entrance of MoMA’s Impressionist gallery remained his touchstone. When Guston returned to the figure, still-life, and landscape, Harrrison commented calmly, “He’s doing what old men do, taking inventory.”

Like Guston, Harrison faced up to dark realities. Individual consciousness was a vessel, packed, like Pharoh’s tomb, with personal history and cultural inheritance. Unpacking the pyramid was Harrison’s definition of painting; laying out the contents of the psyche for examination. Archeology and “digging” were meaningful metaphors for Harrison. Always a student of poetic coincidence, he noted that Howard Carter had excavated Tutenkhamen’s tomb in the year of his birth (Carter was Harrison’s middle name). He would be a lifelong disciple of James Joyce, who had performed literary excavations on the everyday life and mind of his Ulysses, Leopold Bloom.

There is dark humor in Harrison’s work as well. It is the humor of jazz musicians hitting it just right. The images are musically woven chalk lines illuminating enigmatic figures, releasing the edgy laughter that accompanies enlightenment.

Through the eighties, Harrison took his own inventory, paying homage to Billie Holiday, Walt Whitman, Poe, and Melville, in a series of portraits. His circle of admirers grew to include David Kapp, Chris Martin, James Knight, and Tom Bills. Harrison contributed to an anti-apartheid show a tri-faced Shiva skull announcing, “Through me, pass all biases.” He read widely and passed on books. He gave me a copy of The Art of the Renaissance in Northern Europe, with the inscription: “Passing on the most ancient, the most new, Mind Mandala.”

James Harrison saw himself as a link in a chain of visionary artists. He did not necessarily prefer religious imagery. His eye saw quality in artists as diverse as Leonard Baskin and Franz Kline. To Harrison, ALL images were religious, in that the contents of the imagination were sacred. He understood that imaging and dreaming were processes; the point of modern art was to reveal the process as much as the resulting images. He read his drawings as texts of the Collective Unconscious, where meaning is elusive, changeable, layered, and funny. Baroque webs and fiery geometries dance together, delineating, as James Hillman calls archetypes, “the skeletal structures of the psyche.”

Begins self proclaimed third birth in 1990 when he exits hospital after liver surgery. Dies in November of that year. Joins the underground river of ecstatic visionaries, what Gary Snyder calls “the Great Subculture,” which connects the cave painters with Blake, Cezanne, and Mondrian.

Peter Acheson is an artist.

This spring, the Rauschenberg Foundation partnered with Mnuchin Gallery and Gladstone Gallery to present two distinct but connected exhibitions that portray the lightness and irreverence that is integral to his works’ continued success.

Throughout the exhibition, Rauschenberg plays with the availability of narrative when abutting many images in a single picture plane. The works in Channel Surfing, split across two floors, embody the action of movement, of going, of living in and passing through a world glutted with image.