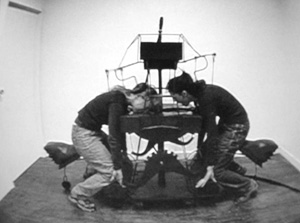 The first thing you notice is the choking. Step inside the bright, narrow antechamber of Lynda Abraham’s installation at Dam, Stuhltrager, and you’ll encounter a bank of black-and-white video monitors running a tape of two women jammed inside a simple but diabolical machine. Perched opposite one another as if engaged in an infernal chess match, the women’s bodies are bent sharply at the waist, forced downward by levers wedged behind their skulls. As the women squirm uncomfortably, the levers respond to their movements by alternately pushing the face of one and then the other into a broad basin of water. The women choke, cough and gasp until one instinctually jerks her head back to gulp mouthfuls of air, driving the other’s face deep below the waterline. The title of the piece is “Compassion.”

A technical drawing of the machine and a descriptive text are posted nearby, where we learn that it is designed for “two people who are hateful and hurtful towards one another.” Its remedy is to compel “one to hear intimately the suffering they are causing the other. Eventually, the guilt will lead to compassion and they will both learn to work together as a team to prevent any more suffering.”

Dante cast the wrathful into the Fifth Circle of Hell, where they are eternally submerged in a filthy swamp, their sighs bubbling to the surface, their laments gurgling in their throats. Although Abraham did not base her imagery on the Inferno, the parallels she has unintentionally drawn to Dante underscore both the universality of her metaphor as well as its grimly comic psychological astuteness. The punishment Dante metes out for the terminally angry is a literal manifestation of their earthly vindictiveness. They were “sullen / in the sweet, sun-gladdened air,” and carried within themselves a “sluggish fog,” and so are forever stuck “miserable in the black slime.” The participants in Abraham’s experiment (the installation is in the form of an observation room, complete with white lab coats hanging from pegs on the wall) are similarly coerced into acting out the painful implications of their sin. Their heads are clamped into a position that makes it impossible for them see “eye to eye.” And they certainly can’t be on speaking terms if every time one opens her mouth it’s filled with backwash from the other’s own struggle for air. To watch this scene played out is to witness two souls literally drowning in their own bile.

The machine itself, two versions of which are on display, is demonically beautiful; painted Goth-black, the welded steel arcs of its levers and frame, contrasted with the roughhewn brutishness of its water basin and rubber hoses, call to mind a string of associations from Josef Mengele to Joseph Beuys, Julio González and both Giacometti brothers, Alberto and Diego. Aesthetically and conceptually, Abraham’s project resides at the intersection of the bestial and the sublime, where she expects her subjects’ ordeal to lead them to the cleansing waters of redemption. But if we think about the unmitigated hatred spreading throughout the world, erupting in explosive bloodshed or set in stone by security barriers (as Sean Hemmerle has brilliantly documented in his photographs of border crossings, reviewed elsewhere in this issue) peaceful resolution of any kind might seem out of the question.

However, Abraham is no blinkered optimist. Her idea of redemption is based not on an appeal to reason or universal love or even the Golden Rule. “Compassion,” along with proposals for similar machines (including a solution for world hunger that imposes food deprivation on the well-fed—echoing the penalty exacted on the mythological Tantalus—and a cure for greed that forces misers to swallow small change and then dig the coins out of their own feces) posits that personal, social or political change will follow nothing less than a visceral revulsion from the consequences of our own actions. As with the hard-won pacifism of many Germans and Japanese after World War II, or the anti-imperialist sentiments of our own “Vietnam Syndrome,” Abraham reminds us of the harsh fact that only after we’ve experienced a crucible of mutual yet ultimately self-inflicted pain do we begin to see the light.

My first encounter with Marcel Duchamp was by no means coincidence. Of course not. How could it have been?

Robert Zehnder’s new paintings and sculptures all possess a strong visual symbology and psychologic indexicality, evocative of his most recent trip to Europe. Returning with a critical and philosophical attachment to the idea of hidden functions of certain architectures, namely those ecclesiastical in nature, Zehnder’s intrigue into how these ideas can influence one’s own spatiality, both internally and exteriorly, has produced Ageless Machine, the artist’s first solo-exhibition with Mrs.