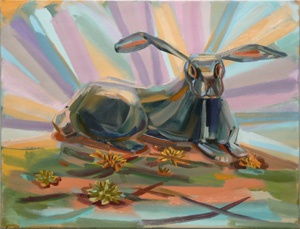 Over the past three decades, Judith Linhares has practically invented the genre of imaginative figurative painting largely populated by confident young women engaged in activities ranging from the banal to the idiosyncratic, thus paving the way for artists such as Amy Cutler, Hillary Harkness, and Dana Schutz. And, as demonstrated by her most recent, aptly titled exhibition, “Rowing in Eden,” she keeps getting better at it. Much has been written of her West Coast upbringing and education, her kinship with Symbolist painting, Outsider art, and Surrealism, her interest in “Bad Girl” behavior and her inclusion in Marcia Tucker’s landmark “Bad Painting” exhibition at the New Museum in 1978. To this list, I would also add German Expressionism. But in Linhares’s lair it has been digested and made celebratory with light. She has literally pushed Emil Nolde’s dark edginess off the canvas. Her complex, saturated colors combined with passages of high key colors underscore an optimistic atmosphere tinged with disquiet and approaching turmoil.

The exhibition is divided into two groups of paintings and a few large gouaches. The large paintings depict an imagined Eden inhabited by fey female figures, animals, and, in one painting, a lone sailboat, while a group of smaller still-life paintings depicted flowers. Linhares breathes new life into this moribund tradition, and her still-lifes could serve as a studio standard for any young artist wishing to learn how to paint. In her large paintings, we are voyeurs. Like the message in the 1881 nursery rhyme, “Row, Row, Row Your Boat,” the paintings are scenes from a dream. Invigorating images of optimistic innocence are set in a forest world which, in its beauty and attention to details, is simultaneously mysterious, idiosyncratic, and threatened. In Linhares’s Eden, the viewer is invited to rediscover the beauty and wonder of common things, as well as to contemplate the history of the forest, which used to be owned by the monarch and was set aside for hunting. All age-generalized towards innocent youth, the female figures are engaged in various outlaw activities just by “hanging out” in this domain. They are breaking the law simply by being there.

Linhares’s figures come in all colors and tend to have slightly cartoony, elfin shapes. At times, they seem to be made of wood both in their coloration and textures, which encourages us to read them symbolically. They are involved in pleasurable activities such as climbing trees, lounging on a blanket on a moonlit night, and daydreaming atop a pile of logs while below honeybees collect pollen from abundant blossoms. Echoes of both the mythical and archetypal tales are ferried in upon swath of color and, like a potion, take effect over time. Shapes, figures, and colors are arranged like characters on a stage and painted with a deftness that makes this difficult-to-achieve work appear effortless. One is apt to not notice Linhares’s mastery of stroke, speed and color because it all feels necessary.

Boat, Endless Rocking (2003) is a portrait of a sailboat at anchor in a moonlit sea. Gestural strokes of luminescent colors suggest moonlight on the sails, and in the radial sky of pale roses and blue grays we glimpse a pair of menacing clouds. Objects and information are added in the way a modifier in a line of poetry can create a hiccup in the logic of the sentence without completely derailing the flow of the line. In Wild Nights (2005), several young women sit nestled in an old growth grove in the glow of a campfire, roasting marshmallows. The strokes describing the flames increase as they rise until they are doing double duty as they become smoke and delineate the shadow of the forest canopy. A cooking pot sits precariously in the center of the fire. What is in the pot? How is it staying in place? How come they are cooking marshmallows over a pot? Patches of what appears to be daylight are glimpsed between massive trunks and through the tree branches. If it is day over there, how can it be night locally? Not surprisingly, the women seem to be innocent of these concerns. The ambience Linhares creates doesn’t allow for worldly concerns.

We happen upon these scenes as if from a boat gliding merrily along a shore. We are rarely acknowledged. It is a world we know cannot last except here in Linhares’s Eden, where we are permitted to row as long as we want to look.

Banshee Sunrise, Linhare’s second solo exhibition with P.P.O.W., solidifies her painterly presence and influence, specifically the important connection she has been able to draw between the figure and Abstract Expressionism through a phenomenological turn within representational work since the late seventies and eighties.