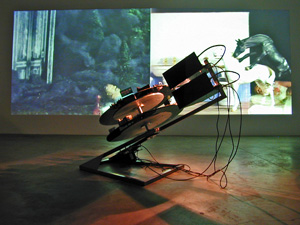 Creating art of great intellectual and emotional complexity is often the result of manipulating received ideas to provoke an unanticipated response. It’s a difficult, high-wire balancing act of turning over familiar ideas to see them anew without preconception or easy dismissal. So goes the recent effort by the McCoys, who have found a novel, engaging way to merge the personal with the political, employing the familiar landscape of dreams as a framework for trenchant social criticism.

With their installation “Dream Sequence” (2006), the centerpiece of their current exhibition (through April 8th) at Postmasters, Jennifer and Kevin McCoy invite the viewer to interpret the artists’ dreams through Freudian analysis, or to read them as a critical narrative. The installation’s large-scale, double-screen video projection is filled with the bizarre language of dream work—symbolism, impossible changes in scale, shifting perspectives—while functioning as a dual, self-conscious narrative on terrorism, war, and natural disaster. It uses the disjointed, fractured syntax of dreams to attach difficult, repressed ideas onto ‘safe’ symbols capable of passing through the conscious mind’s filtering mechanisms. These elements have been clearly ‘directed’ by the artists to engage a range of waking nightmares.

The projection is divided into two simultaneous dream sequences from both Jennifer and Kevin, who are seen sleeping in the lower right corners of the screens. The video is filmed in real time using miniature lenses trained on an intricately constructed, dual-platform, dollhouse-scaled set that rotates in front of the cameras. The revolving imagery, presented as a parallel montage, tracks the sleeper’s private dreams. In Kevin’s narrative, a battle scene shifts from present-day conflicts in the Middle East to the Soviet occupation of Afghanistan and back through the medieval crusades, connecting contemporary political conflicts to a much larger, more intransigent war between competing cultures.

In Jennifer’s video, a dream of stallions fucking and galloping freely gives way to a group of golfers playing through a series of terrorist attacks in the form of wreckage from a suicide bombing on a bus and a downed 747 on a freeway overpass. The stark images of terror intersect comically with the obliviousness of the leisure class. The narrative flows from the safety of generic suburbs to the flooded and ravaged parishes of New Orleans, evoking the underlying class struggles that Hurricane Katrina and the war in Iraq have brought to the surface of our social conscience. It then morphs into a scene in which Jennifer’s prostrate figure lies at the feet of an anonymous torturer. In another sequence, impossibly large men, perhaps father-symbols, rip trees asunder and dominate the landscape, possibly a reference to the condescending paternalism that the Bush administration uses as a shield to trample civil and human rights.

The dual projections build on the artists’ personal fears and insecurities to establish a larger, socially conscious narrative that develops into an effective feminist-Marxist critique. But it’s the artists’ willingness to implicate themselves, physically and emotionally, as the private dreamers that gives the installation its pathos. It is the strongest work in the show, which also includes an ambitious examination of the artists’ youthful ideas about love and sex. The video installation “Double Fantasy II (sex)” (2006) is a pulp fiction montage of the artists’ dreams of fucking the ‘rock star’ and the ‘hot blonde’. It’s a campy piece whose minimalist soundtrack lends its randomly generated editing some emotional weight. Far more whimsical than “Dream Sequence,” it does add a certain lurid, soft-porn attitude to the show’s otherwise melancholy atmosphere.

The smaller works—two of the artists’ clouds series—read like studies for their more ambitious installations. The videos are less cinematic, despite the dark, swirling clouds highlighting their isolated dramatic moments of longing and dislocation. Still, they are another reminder of the McCoys’ restlessly inventive imagination, whose works continue to find new modes of expression. It’s increasingly uncommon for artists to eschew a recognizable style in search of new ways to communicate their ideas; the McCoys demonstrate that it’s not only possible, but that they can do it with ease.

Jennifer Gilmore's If Only

Acclaimed author of adult fiction, Jennifer Gilmore (The Mothers, 2013) makes her second foray into writing for teens with If Only, an honest and affecting consideration of the emotional and ethical complications surrounding the process of open adoption. Comprised not only of separate timelines, but also a variety of alternate possible realities for its characters, If Only explores the relationship between choices and outcomes, the hands of fate (or chaos) and how they shape our identity.

It's the green that really catches my eye; it forms the texture of the sitter's pants. As I keep looking, I notice other details—the couch cushions, the strong profile, the palm fronds in the background. The background is warm and diffuse, but rather than look at the viewer, the sitter is paying attention to something—a phone?—in his hands. This is a portrait of absorption; it is also one of intimacy. I'll be honest, the sitter reminds me of my brother.

Performing poetry invokes community; I no longer enjoy reading my work solo because something else happens when poems are collectively performed.

Self-Taught Artists and Institutional Narratives: Can Museums Find a Balanced Response to an Exclusionary Past? Leslie Umberger Speaks with Kerry James Marshall.

2018 has seen untrained artists surge at major American museums, with the group exhibitions Outliers and American Vanguard Art at the National Gallery of Art and History Refused to Die at the Met, and the upcoming retrospective Between Worlds: The Art of Bill Traylor at the Smithsonian American Art Museum (SAAM). Leslie Umberger, SAAM’s curator of Between Worlds spoke with artist Kerry James Marshall, who wrote the introduction for the accompanying monograph on Traylor.