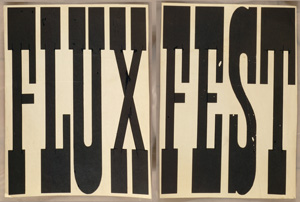 Currently on view at the Maya Stendhal Gallery until April 15th, Fluxus: To George With Love, From the Personal Collection of Jonas Mekas is brilliantly curated by Liutauras Psibilskis. One is at once reminded of George Maciunas’s radical and inventive spirit. His refusal to sell out and become part of the mainstream art world, however, led to the much underestimated and marginalized status of Fluxus in the of art historical hierarchy until the recent Whitney retrospective and several scholarly books, have established Fluxus as both timely and legitimate as an important art movement here and in Europe. Although Jonas Mekas wrote that this display of work from his own collection is “a personal exhibition with no intention of giving an overview of what Fluxus was all about.” This show successfully recounts the advances that Maciunas had set forth for the practice of contemporary art as early as 1952.

The vast number of posters, prints, photographs, film and ephemera narrate the story of a movement that initially began as a publishing venture. A collection of Maciunas’ personal documents such as his passport and certificate of United States citizenship hang on the back wall of the gallery evoking a weathered personal history of exile, persecution and immigration. Originally from Lithuania, Maciunas and his family fled to Germany in 1944 to escape the Russian invasion of their country, remaining there for four years before being forced to emigrate to the U.S in 1948. Having lived his early life fleeing from one dictatorship to another, Maciunas developed a critical stance toward any form of authoritative, absolute power and later challenged the monotonous, masturbatory art world of the late 1950s and early 1960s.

Fluxus began as a movement that moved beyond all forms of socially defined boundaries. Although the sculptures and framed graphic prints on view in the main gallery space were created by Maciunas, other objects encased within three vitrines were made by other artists such as George Brecht, Yoko Ono and Ben Vautier. As Barbara Moore related to me on a recent visit to the gallery, artists presented sketches of ideas that Maciunas later appropriated into finely printed cards. Seven frames by Brecht, for example, consist of handwritten pages reading text such as, “Demonstration Destruction / Earth Exits & Entrances / Fine Flag Fluid Food Furniture.” Another set of seven frames reveals the graphic design that Maciunas applied to the words written by Brecht. Rather than treating the work of art as an expensive commodity, Fluxus viewed it as a way of life, not an end in itself.

In the heat of America’s post-war art market boom, the fame of an artist’s name was a determining factor of artistic success. A 1975 film projection titled “12 Big Names!” appears near the gallery’s main entrance—a combination of well-known art world names, such as Andy Warhol, are shown alongside un-known names. Maciunas’ goal in creating this film-theatre piece, prefaced with sweeping advertisements, was to test the gullible consumer’s patience for viewing a printed name versus seeing a famous artist in person. For Maciunas, Fluxus was “A way of doing things, very informal, sort of like a joke group.” Laughter and humor were essential since it advocated for a lack of ego within the individual mental construction. Fluxus pursued performativity for the purposes of spiritual liberation, freedom of speech, and an embrace of idiosyncrasy in an effort to oppose the patterned lifestyle of conformity, which was promoted by national governments as a form of crowd control.

Even though Fluxus did not participate in political demonstrations, it was often understood as political in nature since its goal was to constantly stress the relationship between the art viewer’s thoughts and actions. As soon as the group fully embraced constant change, Fluxus remained separate from anything that could cause it to become a totality. European Fluxus artist Gustav Metzger, for example, was often excluded from Fluxus festivals because he was interested in incorporating fragments of political news within his work, which threatened to compartmentalize the fluid basis of this movement. In addition, the political protest within Fluxus mirrored that of the Beats, since they focused not on aggressive acts against others but on achieving a shared sense of awareness within the context of collective gatherings.

Maciunas helped Fluxus unite both artist and viewer outside of the realm of spectacle so that art would eventually blur into the mundaneness of daily life. While not on view in this exhibition, George Brecht’s event-score, titled “Word Event, Fluxversion 1” (1961), consisted of the following: “The audience is instructed to leave the theatre.” Although the delivery of an instruction indicates the presence of an authority, in this case artistic authority, Brecht’s work attempted to make use of a minimal number of means to arrive at a mutual understanding with the audience. Since Fluxus event-scores could be performed in any setting, such as a public park, the idea of authorial presence within Brecht’s piece could easily be diluted. In addition, the performer of any Fluxus event-score could be anybody. Much of this appears within the filmed footage of happenings that appear in Mekas’s 1992 film, “Scenes from the Life of George Maciunas,” which serves as the heart of this show.

In the spirit of the Fluxus movement, Fluxus: To George With Love eschews the notion of individual authorship and presents all works under the name of Fluxus. Inevitably the show is held together by scenes of Maciunas’s life in art—ultimately coming to an end at the Fresh Ponds crematorium in Queens, New York. Framed with choral music that was most likely written by Monteverdi, Maciunas’ favorite composer, Jonas Mekas softly narrates memories that he shared with Maciunas in his final days, interspersed with images of the many gatherings and happenings that took place in SoHo.

Fluxus performances sought the exposure of awkwardness within the process of acting: artists hosing each other down on the street; Nam Jun Paik beginning a piano performance which immediately turns into an exchange of objects with the audience; shared meals; artists venturing in a boat up the Hudson River. In 1963, Maciunas claimed that these concerts functioned as an “educational means to convert the audiences to such non-art experiences in their daily lives.” The selection of work on view at the Maya Stendhal Gallery offers us only a fraction of the Fluxus oeuvre from the 1950s through the 1970s. It’s difficult to imagine where contemporary art would be if Fluxus had never existed. The growth of Fluxus within Europe as well as America propelled plurality into art so that the creative process could flourish. This exhibit not only reassures the immense significance of George Maciunas’s role in the Fluxus movement—an equivalent to Max Ernst’s contribution to Surrealism—it is probably the last time one can see a comprehensive Fluxus collection from a private hand before it enters the domain of the museum.

To Gina With Love

Sam Kahn pens a love letter to playwright Gina Gionfriddo, charting her career, inner world of her plays, and the influence she had over his life and writing.

pear ware: I love you, I think

When a three-person collaborative becomes a two-person team, the connections that bonded the whole need to be reevaluated. Through I love you, I think , Mika Agari and Carol Hu begin the process of discovering what it means to continue a collaboration in the face of notable absence.