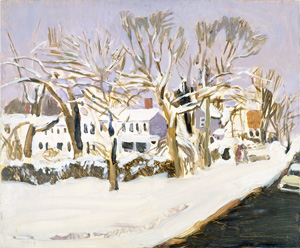 The survey of paintings by Fairfield Porter (1907–1975) at Betty Cuningham comes as a welcome corrective. Under-championed in his own time, Porter is due full acknowledgement for the scope of his contribution to painting. He was a modern master whose work can be seen to have opened nearly as many vistas for other artists to explore as that of his New York School colleague and friend Willem de Kooning. What this exhibition, in the heart of Chelsea, serves to clarify is just how contemporary and challenging Porter’s art remains.

Porter’s insight into the nature of direct observation in painting put him ahead of his time. He understood that it is our attitude toward the things that surround us, not the things themselves, that defines the quality of our statements about them. Accordingly, he avoided emotionally charged imagery and allowed whatever fell under his gaze to come into his painting. In “The Campus” (1970), for example, Porter did not seek to dramatize architecture or atmospheric effects. Instead, his straightforward depiction of walkways, clouds and trees gives rise to an order that feels very natural—something very different from the comparatively contrived compositions favored by the Luminists, the Precisionists or the American Impressionists. In this way, Porter’s work finds its way into rapport with post expressionism and its focus on the expressive potential of qualities and structure inherent in materials. This is the crux of Porter’s contemporary appeal. He attempts, insofar as it is possible, to avoid the imposition of his identity on the objects of his attention. Beyond the obvious preoccupation, current in this country, with all things pertaining to identity, there is something very American in this particular, reticent attitude in Porter. It evokes our take-it-or-leave-it pragmatism, as exemplified by Thoreau and James. It also has to do with our Pop Art materialism – our dubious belief that truth and even happiness is identifiable with our material environment. So it is that one finds so much to contemplate in Porter’s unassuming depictions of snowy New England towns and foggy bays and forests.

In addition to his gifts as a painter, Porter possessed an exceptionally inquisitive and agile mind. Educated at Harvard, he studied art history and attended lectures on philosophy by Alfred North Whitehead. He also wrote poetry. This provided Porter with a broad background for his critical writings, originally published in The Nation, Art News and Art in America among other periodicals. They are a testimony to his love for painting and an invaluable contribution to modern scholarship.

The paintings on display at Betty Cuningham, some of Porter’s finest among them, leave no doubt as to his influence on other painters. “Jane and Elizabeth” (1967), an image of a pink-clad lady and a child in red overalls, is among Porter’s best known images and must have encouraged Wayne Thiebaud’s portraits. Among younger artists, Luc Tuymans and Elizabeth Peyton owe a debt to Porter’s sense of touch–the power of paint to suggest diverse textures without ever losing its material allure as paint. In “Snow On South Maine Street” (1974), Porter paints the trees with a touch that distinguishes branch from snow from sky so deftly that he evokes not just the image but the very sensation of the place represented. We feel that we are there, at the site of the painting’s creation.

Porter also helped pave the way for now-well-known figurative painters such as Rackstraw Downes, Philip Pearlstein and Alex Katz. These artists’ work is often considered in terms of the hegemonic abstraction that preceded it. They are credited with finding ways to make representation valid once more. The story goes that, after years beneath the bludgeon of abstraction, certain daring artists rebelled by returning to representational painting. This, however, is only half the tale. The other half is told in the work of those artists who, even in abstraction’s heyday, stuck to representational painting. Porter is their greatest representative. He grew up among the legendary artists of the New York School and watched his own work fail to attract attention because it lacked the apparent novelty of the abstract painters.

One might imagine that Porter’s position as the odd man out among his contemporaries would have made him overly defensive or reclusive. Some of his abstract painter peers slipped into just such a reactionary position due to the initial hostility that their work generated in the general public and press. Abstraction, they seemed to argue, was the only true expression of modern man’s condition and any other way of working was retrograde. Porter was far too open-minded for that and his abstract peers knew no greater supporter of their work.

Porter’s collected criticism, aptly entitled Art in its Own Terms, is very much in line with the catholic attitude most critics take toward art today and very much opposed to Greenberg’s then-dominant doctrine of formalism. Porter hated dogma of any sort and was quite adept at combating it. In one heated dispute over the supposed arrogance of signing one’s name to a painting, he cut straight to the quick by pointing out that if you are arrogant and you sign your paintings, then it is arrogant to sign your paintings and if you are not arrogant and you sign your paintings, then it is not arrogant to sign your paintings. Now, some 30 years after his death, Porter’s humble, intelligent approach and dexterous painting are finally coming into their own.

Exhibitions of paintings have been an ongoing challenge to present over the past several months. Given the restrictions prescribed to protect citizens from the novel coronavirus in crowded environments, the automatic reflex has been for museums, galleries, independent curators, and artists to turn immediately to virtual programming as a surrogate method for viewing. Yet those of us who know the differences between the texture, light, and scale of a painting in real-time and space and its presence on a screen also know why the latter is no match for the former.

Early on Giorgio Morandi was a familiar, but marginal figure within Italian Futurism, who by the time of his death occupied only a modest place in modernist collecting culture. Thanks to important historical work by Janet Abramowicz in Giorgio Morandi: The Art of Silence (2005), we have a reliable account of Morandi’s life. To this growing corpus, we can now add the perspectives of other contemporary artists collected in Zwirner Books’s Giorgio Morandi: Late Paintings.