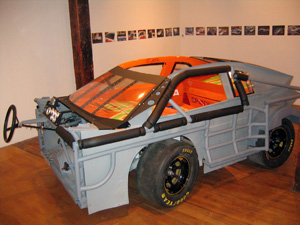 Yeah, I’m a car guy, or at least I was in my youth until I got hooked on bicycling. But in my book, anyone who likes to roll in style is cool. Dan Devine’s Inside-Out NASCAR proffers a series of questions that don’t always reach into the higher realms of aesthetics but provoke responses at a more visceral level—the part of your gut that vibrates when you stand beside a twelve hundred horsepower supercharged rocket on four wheels. Growing up before the current NASCAR frenzy, and coming from a place closer to the West Coast than Middle America, instead of NASCAR we had the NHRA, National Hot Rod Association. This was the body that sanctioned most drag racing, as well as producing its own gamut of magazines and other labeled products. Comparatively there’s a great difference between stock car racing and drag racing, and I’d argue that drag racing is a more profound expression of American Dynamism than stock car racing: it’s brief, powerful and to the point, like Abstract Expressionism on nitro. Stock car racing on the other hand is more tedious—the repeated laps, the hundreds of miles and the hours of watching are perhaps more akin to performance art. With stock car racing there is however a greater chance of seeing fantastic crashes, involving bunches of cars, and regular deaths that are also, perhaps, an expression of some American fascination with speeding machines, wheels and the road.

“Inside-Out NASCAR” functions as a kind of Dadaesque collage, a found object literally turned in on itself with all the implications that such an act implies. Is there a reference, as in Duchamp’s “Large Glass,” to a gender-bending metaphor, a subversion of this last bastion of red-blooded machismo? Or is it a critique of the blatant media pandering and promotion that, when focused in on itself, seems to create a critical mass of propaganda? The exposed safety cage in flat grey and window brackets in flat black are here a parody of functionality as well as a coloristic foil to the bright orange enamel interior. A dashboard display of gauges and a steering wheel—things that should be tucked inside—protrude from the front and present us with a kind of auto-erotic (excuse the pun) phallus. On the surrounding gallery walls, a row of documentary photographs illustrates the story of finding the car, its conversion and restoration, not unlike articles in Car and Driver. The final castration is the lack of an engine. I imagined something exotic with polished headers, turbochargers and fuel-injection connected to a drive train. If only someone could’ve started this baby up and driven it around the gallery. 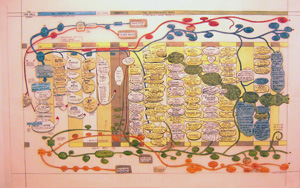 Having reached a state of Neo-Post-Everything, the ancient traditions of newness and novelty are worn out. Paradoxically, the most rational way to build a bridge to our artistic future is to utilize our past. The graphs and charts that constitute Ward Shelley’s “Re-Materializing Art” are, I believe, important not only for their visual appeal, or for their committed documentation of lesser-known luminaries and factions of the art world, but for their challenge to the stranglehold the arts community has endured at the hands of academic “art historians” who write history by means of exclusion. What could be more fitting than to reconstitute the history of art as art? As Ad Reinhardt said, “Art is art, everything else is everything else.”

Since I first wrote about Shelley’s project “Williamsburg Timeline” (2002), I’ve been intrigued with his efforts in depicting various aspects of art history that have somehow escaped the attention of the “establishment.” In “The Four Walls Story” (2006) we’re treated to more information about Mike Ballou, his pards Adam Simon, Amy Sillman and Michele Araujo, and the program at Four Walls from 1984 to 2000 than most anyone would care to know. There is nothing more tragic than the unobserved life and among those who labor in the art field; recognition by one’s peers is a small reward that keeps people motivated. Another neglected aspect of art history is the need to contextualize its narrative, to add as many voices as possible to the conversation, to use as many tools as we have available to record the rolling story of our contemporary art world from every possible perspective.

Formally, Shelley’s drawing and lettering become a bit mannered and over-plotted, his flow charts a bit formulaic with their info bubbles transmogrifying into nodes or organs, their lines and arrows conveying visual momentum like the digestive tract carries bile. The allusion to ducts and vessels does add a sense of the organic, slightly grotesque and messy nature of real life. In both “What’s Important In Life” (2005) and “Sketch of Chris Burden” (2006), cartoony silhouettes of figures are used as backgrounds for the flow charts, distracting from the abstract “graphic” flatness that transmits a kind of pseudo-seriousness in the other pieces. I would like to see a bit more of the slop, the improvised and tacked-on that would suggest a more authentic representation of the actual progression of life, like the glued-on paper in “CBGB” (2005).

“The only thing new is the history you don’t know” is a favorite quote from Harry Truman, and judging from recent conversations I’ve had with young artists, our institutions of higher learning have sacrificed an understanding of art history to the short attention span. Fortunately for us, if Shelley persists in this line of development, he’ll inevitably come up with other means and devices to help elucidate the meanings and layers of the information he intends to impart. The great thing about history is that it’s an endless source, an ever-flowing river of potential subjects. What artist could be blessed with more; we are, after all, our own art history.