An abbreviated commentary on the Armory Show, SCOPE, the LA Art Fair, PULSE, DIVA and Fountain 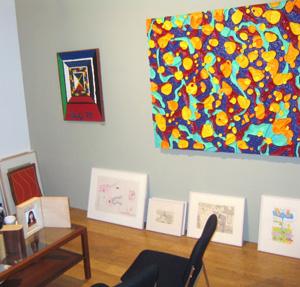 First a disclaimer: I had works presented (under an alias) at both the Scope and Fountain shows, but I won’t review myself; however, I did get to see the backstage action and hear some juicy gossip. Though I generally love visiting art fairs and believe that they, in some ways, provide a truer picture of contemporary art than institutional extravaganzas like the Whitney Biennial (which will be covered extensively elsewhere in this issue), it is virtually impossible for even the most hardcore art observer to take in over 300 gallery displays in four days. That said, some of us are stupid enough to try.

Here is a short list of my awards for outstanding or dubious achievements. In the unbridled capitalism category: the Armory Show. As the world’s most expensive fair, exhibitors get less for their money than just about anywhere else; no catalogue, union control of all work on premise (even to hang the paintings) and expensive entrance fees. For the best catalogue: SCOPE. Hell, they had the only catalogue; PULSE, the Armory and LA Art Fair should learn from the producers of “Basel” the value and need of collectors and critics for this kind of documentation. In the most valiant effort category: The Fountain Show. Three of Williamsburg’s most dymamic galleries took on the “Blue Chips” and produced and alternative “fair” right across 12th Avenue from the big boys. It was fresh and in their faces, a perfect example of avant-energetics. The most obscure fair award goes to: DIVA. This digital and video event was housed 60 blocks south in the hard to find Embassy Suites Hotel. Though not a fan of “hotel fairs,” the darkened rooms and banks of video screens in front of comfy couches and chairs seemed a natural fit for displaying “New Media.” Most widely represented artist award goes to: Alex Katz, who had his large, flat figurative paintings displayed in at least four different booths, with the runner-up award going to: Jonathan Lasker, who had a several paintings from the early nineties vying for sales from European dealers.

The Funk-a-Dellic-Grungemaster award goes to: SCOPE. This fair really distinguished itself from the other “commercial” fairs with its rugged industrial locale, wacky projects department and almost infantile exuberance. What could be closer to the essence of today’s art scene? In the biggest irony category: the LA Art Fair. Is it just me, or is the fact that the Daniel Weinberg booth, which had just about the best work anywhere, was showing mostly New York artists including Chris Martin, Steven DiBenedetto, Carroll Dunham and Bruce Pearson? Best art karma award goes to: PULSE. They had the brilliant idea to actually have a show on the site of the original “Amory Show” of 1913, while the current Armory Show was across town on a pier nowhere near an armory. Confusing, but that’s New York. Finally, the greatest pleasure award goes to: Irving Sandler, with whom I finally had a chance to chat about his latest book, A Sweeper-Up After Artists. It did my soul good to speak with this esteemed explorer of the art world, even if we did have to dodge go-carts with boom boxes that were drag racing up the aisles at SCOPE. 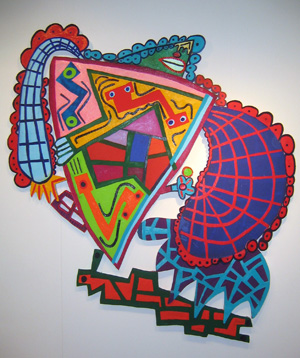 Elizabeth Murray at Pace Wildenstein at the Armory Show.

On a serious note, the overall feeling of the Armory show was a bit tacky. Yes, this is the preeminent fair, but there really ought to have been more attention paid to things like the café, public facilities and project areas where something besides sales would be happening. Generally I’d hoped to see more A-list works from the likes of Lichtenstein, Rauschenberg, Hurst, Kiefer, Polke or Baselitz, but no. I had to wait for PULSE to see some of the Germans. There were a few nice surprises, like Jonathan Schipper’s “215 Points of View,” a five-foot sphere of small video monitors connected to surveillance cameras, as well as some beautiful drawings by Daniel Zeller and Ward Shelley at the Pierogi booth. I’d first seen the British painter Philip Allen’s works a couple of years ago at PS1; here at the Kirlin Gallery booth they were just as startling with their textural fracture between images of smooth neo-geometric abstraction, edged with tumerous clumps of withering oil paint. It was good to see a brilliant new Elizabeth Murray piece at Pace Wildenstein, and to hear of her continuing feistiness. With 153 galleries on two piers vying for your attention, what seems to remain in memory are shared sensibilities or trends rather than individual offerings.

Walking the three blocks from the Armory Show to SCOPE, many visitors paused for a gander at the “Fountain” show. Highlights included Tom Broadbent’s wacky travel cases, Sean Hemmerle’s photos of war-torn Iraq, and Kate Vance’s miniature waterways at Front Room. Next door at Capla Kesting, small funky paintings by Brian Leo and a large hanging piece by Anthony Zito caught my eye, as did the collages by Greg Lamarche and the “Goldmine Shit House” boys at McCaig-Welles. 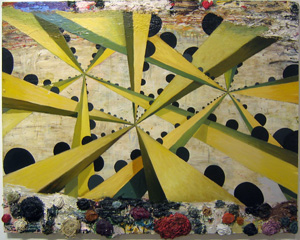 Philip Allen at Kirlin Gallery at the Armory Show.

Entering SCOPE was like being admitted to a nursery for the artistically incorrigible. The large booths were interspersed with scrappy installations that looked as if they were built out of whatever these kids could scrounge on the street. Notable projects included: The New York City Museum of Complaint; a paint-ball shooting range with live artists as targets by Jesse Bercowetz and Matt Bua; a scary Goth-themed tableau of gun wielding Punks and exotic dancers by Carol Riot Kane at 31 Grand, and the elegant “Sketch of a Field of Grass” by Ryan Wolf at Dam, Stuhltrager. Interesting paintings included the Canadian Kim Borland’s slashing, chunky, expressionistic figures in landscapes at Angell Gallery, and Sebastian Gögel’s Boschian monsters at Galerie Adler.

After nearly an hour of biking around the Battery I finally located DIVA at the Embassy Suites. From the French receptionists to the proliferation of Japanese, German and Spanish exhibitors, DIVA exudes a continental ambiance and laidback elegance. While the hotel room setting limited the format of the presentations somewhat, I found some Claymation, stop-action and montage pieces that made me pause for a moment. Susane Brügger’s series of dancing girls on several monitors at TZR Gallerie was engrossing with a hint of the erotic. Gallery Boreas presented Peter Finnemore’s “Project Jedi” in a room covered in the artist’s signature camouflaged tarps.

Meanwhile uptown at the Altman Building on West 18th Street, the LA Art/New York fair was humming along. The Frank Lloyd Gallery, specializing in fine crafts, presented beautiful examples of work by Peter Voulkas and Adrian Saxe. Garden hoses were fashioned by Lynn Aldrich into unique wall sculptures at Carl Berg Gallery. Punchy Neo-Pop paintings of collaged lettering by Andrew Falkowsky presented at Rosamund Felson put me in mind of Heidi Cody’s “American Alphabet” and seemed to sum up the sunny bright, lightweight attitude of much of the LA scene.

Both LA Art and PULSE appeared to be mere extensions of the Armory’s slick, sales-driven approach to art fairs. This was PULSE’s first appearance in New York and they’d done their homework. Having only read about the “Armory Show” it was great to finally visit the actual site. At 60 galleries from 12 countries, PULSE was just about the right size for an afternoon stroll. With rain dripping from the 100-foot high ceiling, there were a few physical problems with the location but for all the historical associations one can make adjustments. Jennifer Dalton was the featured artist at Plus Ultra’s space; her “The Collector-ibles” was composed of five glass-fronted cases lined with figurines representing the 200 biggest art collectors from the Art News list. These individual pieces could be used for a massive art-monopoly game. Simon Linke was a new discovery. His thickly encrusted paintings at London’s One in the Other Gallery parody works by Brice Marden and Julian Opie and display amazing dexterity and paint handling considering their mass. A portrait of Karl Marx collaged from cut-up dollar bills by Mark Wagner was an eye catcher at Pavel Zoubok, typifying the conundrum that “revolutionary” artists face within our capitalistic system. Finally, Freight Volume showed a selection of paintings by Peter Gallo that contained all the authentic crappy inartistic skuzz that to me heralds a true punk outsider: references to Kant and Nietzsche are rendered on the backs of used flea market canvases, and a limited palette echoing dung and bubble-gum sets the tone.

At some juncture the idea of the art fair will reach the point of diminishing returns. How many fairs can there be in one place at one time before you oversaturate the Market? Perhaps now we know.

Dewey Crumpler is a painter living in the Bay Area. His solo exhibition The Complete Hoodie Works, 1993–Present at Cushion Works in San Francisco’s Mission District features over 100 small paintings on canvas made over the past 28 years.