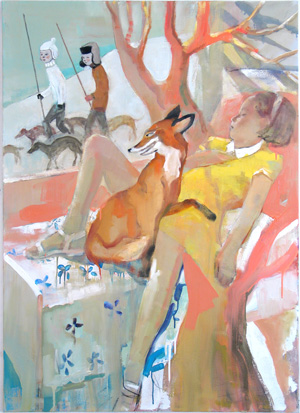 Mike Cockrill’s current exhibition of paintings at 31 Grand is entitled Over the Garden Wall. One part John Currin, two parts Balthus, Cockrill’s garden is a place where childhood play meets adult sexuality in an elixir equally suggestive and nostalgic. Children poised on the verge of adolescence feign poses to determine if they fit in. Puppy dogs and picnics abound. Cockrill’s painting feels effortless and his drawings embody the easy grace children naturally possess. His symbolism is perhaps best when it’s subtle: his unprepossessing “Girl before a Mirror” is as effective as his art history laden tour de force, “Naughty.”

With this first American large-scale exhibition of Hilma af Klint’s profoundly moving art, it is as though a needle has been lifted from a well-worn record called “the entrenched history of abstraction,” and any attempts to place the needle back into the grove will henceforth prove difficult.