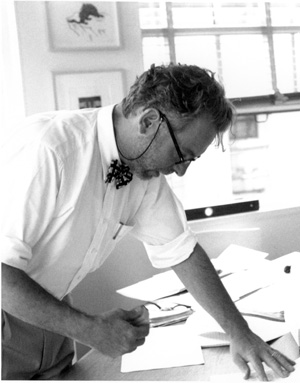 Paul Gulielmetti in his office, Photograph by Robert Frank.

Paul Gulielmetti was an extraordinary lawyer who not only knew the law, he understood what was right. He loved downtown New York. He loved artists, how they worked, lived and thought. If you lived in a loft and were in a legal jam you knew if there was any daylight Paul would patiently find it. For him there was one roof over us all: trust and reason. Paul helped build it, and he dedicated himself to keeping it in good repair.

Paul was a particularly good friend to and supporter of The Trey Whitfield School in East Brooklyn. Education for Paul was as essential to life as good health and good friends.

Paul had a favorite poem, “To Be Of Use,” written by Marge Piercy, and he insisted that if you knew it, you knew him.

The people I love the best
jump into work head first

without dallying in the shallows

and swim off with sure strokes almost out of sight…

I love people who harness themselves, an ox to a heavy cart,
who pull like water buffalo, with massive patience,

who strain in the mud and the muck to move things forward,

who do what has to be done, again and again

The Brooklyn Rail joins Paul’s family and his many friends and associates in honoring a life lived in energetic kindness, citizenship and service.

For Paul, and Everybody Else

When in the course of human events
You come across a chanterelle in the courtroom, say,

Or a small Italian cigar will begin speaking about a nice red,

Say, or let us go over there under that tree

To the spot where the sun has settled among the humus

And taking a left at the espresso machine, we find ourselves

Staring right at the courtroom door

Where the judge is frozen in amazement

As a human being seems to have found

The meaning of justice: an artist, a dancer, who wants to live, say,
In the house where her daughter was born, and that same sun

You noticed next to the berry patch is drawing closer

To the royal blue painting of a bicycle, a bicycle that appears now

To be built for two, changing to three or now it is a community

Bicycle where each member of the community gets a seat

As Paul runs alongside, tying his bowtie and teaching us all how to ride

Paul’s association with The Drawing Center began in 1977 when he helped negotiate our first lease on Greene Street. At that time Soho was a unique artistic community; a reservoir of talent ready to shape a new and better world. Paul Gulielmetti was so clearly visible; like a smoldering fire. Young, brash, handsome, dynamic and passionate. It was no wonder that so many people sought out his counsel and help.

For 28 years Paul offered The Drawing Center very thoughtful advice and support at every turn I can recall. I always assumed that with Paul at my side reason would prevail. And it did.

Often there was a formal rigor to Paul’s legal mind: clearly reasoned ideas, well articulated procedure. All arrived at and with the drive and skill of an inventor discovering something new.

But Paul could be all elbows, too. With Paul, valor and heart meant everything. His world was a place to set standards, to advance idealism and to measure our ability to do the right thing at all times.

Paul understood that art thrives on that narrow glimpse of reality. Light, weight and atmosphere transformed by the visible traces of a hand at work. I think Paul identified with this struggle to realize a form and a shape in a space, wrestling to make something real and alive.

We at the Drawing Center join his entire family, friends and associates in tribute. Paul’s dazzling spirit will always be appreciated and remembered here. Paul was that kind of bright light who reminded us that we can connect up to the whole body of the world at any moment. All we have to do is try.

Before we ever met Paul we had heard of him. If you were a loft tenant in the seventies and eighties in a dispute with your landlord, Paul Gulielmetti was the man who was enthusiastically recommended by a fellow artist. Paul was a champion of loft tenants and he fought hard and won for many of us. In 1982 he urged the tenants of 131-135 Duane Street to sue their landlord, Sylvan Lawrence, rather than wait to be sued by him. I went down to the trial to cheer my friends on, and see Paul in action. He was smart, he was fast on his feet and he had style. It was exhilarating to watch him. And he won. It was an historic victory for the first loft tenants to sue under the Rent Stabilization law.

Art creates wealth and glamour for the city but if the artists who make it happen to be loft tenants, our position is often insecure and not particularly glamorous—All the more reason to rejoice in a handsome lawyer who wore cowboy boots. A friend says: Paul dressed with care and flair, and that’s how he was in the courtroom. Another artist describes Paul at her loft board hearing: He had authority without being aggressive.

We saw Paul maybe three or four times a year, sometimes in his office, but more often at the Green Market, walking down Sullivan Street or at MOMA only a few weeks before he died. We always stopped to talk, catch up, complain about the world, and be reminded that there were still people who you knew without question were on your, on “our side.” I used to tell him I wished he would run for public office.

A few weeks ago I was talking to an artist whom Paul had represented—She realized that he had a larger place in her life than she had known. I felt the same way and asked her why she thought that was. She said: because he was a model—a model of service.

Paul’s family and close friends will miss and remember him in ways that I cannot, but I will miss Paul Gulielmetti the public man, who helped and encouraged so many of us in our fight to keep our lives and studios together under one roof.

George Negroponte is an artist and was President of the Drawing Center from 2002-2007.