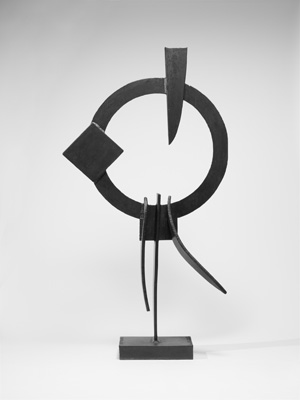 In 1943, reviewing a group show of sculpture at Buchholz and Willard Galleries for The Nation, Clement Greenberg wrote that David Smith’s work “puts in the shade almost everything else.” After praising Interior, “a sort of horizontal cage figuring the skeleton of the organism which is the family, and whose corporeal identity is the house,” Greenberg concluded that “If [Smith] is able to maintain the level set in the work he has already done [at 36]…he has a chance of becoming one of the greatest of all American artists.”

Greenberg’s enthusiasm was provoked by Smith’s intimately scaled, open structures, assembled out of rods and planes of iron and steel. Their industrial materials and methods were indebted to Picasso and González’s pioneering constructions in metal; their imagery—like most ambitious work by Smith’s generation of New York artists—was similarly indebted to the European vanguard, especially to Picasso, Miró, and the Surrealist period of Giacometti. But Smith’s sculptures were also personal to the point of idiosyncrasy and robust in a way that could only be termed American. Among the works Greenberg admired at Buchholz and Willard were Interior (1937) and Interior for Exterior (1939), a related “house sculpture,” both of which were clearly related to Giacometti’s frail, mysterious, The Palace at 4 A.M., a work that Smith knew first-hand from the collection of the Museum of Modern Art. Smith appropriated Giacometti’s imagery but translated it into his own formal vocabulary, replacing European refinement with ad hoc transformations. In Smith’s hands, Giacometti’s delicately constructed, magic toy building became a rigid metal cage and the light, swung forms that punctuate The Palace became forged and cast masses. Smith completely transformed, too, the literal structural logic of Giacometti’s schematically outlined building; the linear elements of both Interior and Interior for Exterior trace, instead, evocative but illogical trajectories that suggest place and enclosure without describing anything.

It’s possible to see all this, and more, in David Smith: A Centennial, _ at the Guggenheim until mid-May. Organized to celebrate the anniversary of Smith’s birth (in Decatur, Indiana, in 1906), the retrospective gives full weight to the formative works that announced his originality and potency during the first half of his working life: everything from his earliest experiments with welded metal and found objects—the first American sculptures of their kind, made in 1933, after Smith saw an issue of _Cahiers d’Art devoted to Picasso and González’s innovative constructions—to his dazzling, mid-career “drawings in space,” made around 1950. This wealth of Smith’s endlessly inventive, sometimes cranky, sometimes playful, always unexpected constructions of the 1930s and 1940s richly bears out the acuity of Greenberg’s eye in that 1943 review. (Both Interior and Interior for Exterior are present.) The selection also allows us to track the origins of many themes and formal inventions that would persist, disguised by more abstract language, throughout Smith’s evolution: notions of presentation, elusiveness, confrontation, threat, seduction, and more.

What’s not possible at the Guggenheim, alas, is to appreciate fully Greenberg’s prescience in saying that Smith would become “one of the greatest of all American artists.” The ample, informative survey of Smith’s formative years with which David Smith: A Centennial begins has been achieved at the expense of his mature work. There are splendid sculptures and first rate drawings from all periods included in the show, but the selection of sculptures made between 1950—the mid-point of Smith’s approximately three decade long career—and 1965—the year of his death in an automobile accident—is dramatically less comprehensive than the selection of early work. For the statistically minded: Between 1950 and 1965, Smith made more than twice as many sculptures, most of them large, as he did before 1950, yet less than half the works at the Guggenheim come from this last fertile period. This disproportionate weighting towards Smith’s formative years distorts our perception of his evolution.

It’s not simply a question of numbers, nor of how compelling Smith’s early efforts are. (This is probably the place to admit that I am not only a passionate admirer of the early work but that I organized the first museum exhibition of Smith’s sculpture and drawings of the 1930s and ‘40s, twenty five years ago.) The problem is that the Guggenheim exhibition’s curator, the European-born and trained Carmen Giménez, seems more interested in what Smith learned from the European avant garde during his formative years than with what he did with that knowledge—which probably explains why the only post-1950 series represented in depth is the slender, upright Forgings, which can be described as Smith’s response to Giacometti’s attenuated figures. For those who know Smith’s work well, the exhibition’s imbalance is merely irritating, but for those who don’t, it makes it difficult to grasp the full magnitude of his achievement.

Smith was among the most original, protean, and potent artists of the 20th century, an apparently tireless inventor of unexpected, eloquent forms. There are mature Smiths as confrontational as poised, watchful figures (without looking like figures), others like narrow “wagons” or still lifes, and still others that seem to conflate heavy artillery with oversized pull-toys. Some of Smith’s most powerful sculptures of the 1960s seemed pared down to the most delicate, economical structures possible; others are so aggressively opaque that we must rely on memory to orient ourselves as we move around them. Some of Smith’s works seem to frame the landscape, some reflect the colors of their surroundings, and some separate themselves from their settings by means of brushy polychromy. As a mature sculptor, Smith relentlessly pursued all the diverse implications of each work he completed, frequently complaining about the difficulty of finding time to realize all of his ideas. He used drawing, painting, and reliefs as means to capture possibilities and explore his dominant obsessions without the brute labor of working in steel or the need to obey the law of gravity, producing hundreds of works in various media, in three dimensions, often in large scale.

The skewing of David Smith: A Centennial towards early work deprives viewers of a sense of both the ferocity of Smith’s non-stop work habits and the fecundity of his imagination, since it suggests that he put most of his effort into linear, intimately scaled sculptures and produced a relatively small number of large works of only a few types. At the Guggenheim, the emphasis, post-1950, is largely on upright, confrontational “figures,” which hardly tells the whole story, even if it allows for the inclusion of a number of notably wonderful works, including—among others—the great Tanktotem III, 1953, with its implicit gesture of acceptance, straining upwards from a fragile tripod, and Tanktotem IX, 1960, with its implacable frontality and paradoxically casual stance.

As the titles of the Tanktotems suggest, Smith organized many of the sculptures he made after 1950 into numbered series—Tanktotems, Sentinels, Zigs, Circles, and so on—yet the dates he carefully inscribed on each sculpture reveal that rather than working in orderly progressions, he made several different types of sculptures simultaneously, exploring the multiple possibilities suggested by, as he put it, “past works, the three or four works in process, and the work yet to come;” finished sculptures may have been assigned to a series only after being contemplated, over time, in relation to their fellows. For all of the variety of Smith’s work, the cross-connections among his sculptures—evidence of their belonging to what he called the “stream” of his “work life”—are part of their fascination. While some of these complex interrelationships are revealed by the selections at the Guggenheim, there are also peculiar gaps; the show includes none of the astonishing polychrome Zigs of the 1960s and few painted sculptures, in general. These omissions are particularly conspicuous when we take into account Smith’s life-long quest to combine painting and sculpture into what he called “a new art form that would beat either one.”

More troubling is the exaggerated backlighting on the Guggenheim ramp, which flattens sculptures into silhouettes. This is not only unpleasant but also exacerbates one of the most persistent misconceptions about Smith’s work: that his sculpture is flat and pictorial. It’s true that photographs—even, or especially, Smith’s own—flatten his work. It’s true that he constantly played with the implications of an imaginary picture plane in his structures and that he often said he “belonged with painters.” But though his sculptures have distinct, often unrelated front and back views, and unpredictable side views, they are wholly about three-dimensional articulation in space. Smith was one of the most sculptural (and delicate) of sculptors, attuned to the subtleties of how things touch, overlap, and project, and to the physical properties of materials—size, visual weight, color, density, and more—all of which he turned into carriers of profound feeling. At the Guggenheim, this spatial complexity and nuanced physicality are visible only if we view the sculptures from the inside of the ramp.

But it’s mean-spirited to fault any exhibition that includes so many of Smith’s most remarkable works. We can only be grateful for the opportunity to see the long-limbed Wagons and a workbench still life, in a sampling of the Voltris, made in an inspired month-long campaign at an abandoned Italian steel factory. It’s good to see a group of Voltri- Boltons, made with Italian material in upstate New York, including VB XXIII, 1963, a “table torso,” part Cubist still life, part schematic figure, with a complicated play of like and unlike forms. And there’s much more to savor. It’s only because the works at the Guggenheim are so spectacular that we want more. For all the virtues of David Smith: A Centennial, our greatest American sculptor still is owed a complete retrospective.

Coda: Greenberg was obviously right about Smith’s promise, but it turns out that he was dead wrong about the ostensible subject of _Interior. _ Smith’s drawings indicate that rather than being a high-minded disquisition on “the organism that is the family,” the piece is rooted in an ordinary studio event: a photographer recording one of Smith’s sculptures on a table. That, of course, is part of Smith’s genius. It’s arguable that he was never an abstract sculptor at all, but instead, an inspired translator of perceptions into new, self-sufficient, surprising objects.

Karen Wilkin is a New York-based independent curator and critic.

The three artists exchanged letters across long geographic distances, with Smith chiefly writing from his home in Bolton Landing in the Adirondack Mountains, and Motherwell and Frankenthaler writing to Smith from their homes in Provincetown and New York City or while on international vacations. Yet the letters tell only a partial story: The artists’ drawings, paintings, and sculptures reveal a largely non-verbal and, arguably, more intimate dialogue.

Smith knew sculpture for what it was: an object in its own right, and, traditionally, a memorial to those who preceded those currently living, now gone. At the same time, his abstraction moved his art into a field of pure form, tending at times to reference nothing but itself.