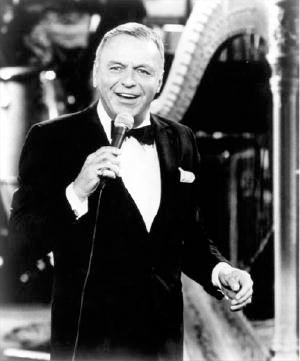 “Hey Frankie,” says Butts Gianconi as he fiddles with the turntable. “Check this out. It’s a big hit in France. ‘Je nuh regret ree-in.’”

“So what, you want me to clap for you cuz you know French?” Frank’s big wop smile holds his cigarette erect in his patronizing wop lips. He claps his hands as if Butts just took his first potty.

“No, listen, Frankie,” Butts says in a tone meant to calm the star down a bit. “Don’t get in one of your moods. I’m just tellin’ ya, there’s money to be made. Listen—“

“I’m listenin’ and all I hear is some fat putz pushing some French broad pretendin’ she knows it all.”

But as the song progresses, Frank pretends to conduct a bit with his ring-clad pinkie, beneath a curling trail of cigarette smoke originating from a recently lit cigarette between his bird and index fingers. His eyes smile and roll with the melody in mock adoration—or is it mock at all? Butts can’t quite tell when Frank is in one of his “moods.” Butts also sees that Frank’s other hand is concealed in his armpit in a fist, as if he’d belt the chienne a good one if she were only in the room. Still. As the song progresses, the look of sarcasm gets a bit soft around the edges. In fact, Butts begins to think, “Hey, he likes it!”

Butts re-lights his perpetually soggy cigar. His big fat smile pushes back the mammoth folds of facial fat like the tide against the garbage on the Jersey shore. The song ends.

“You like it,” Butts says, once again fiddling with his lighter. “I can tell.”

There is a moment of silence as the needle clicks at the center of the turntable. Sinatra walks right up into Butt’s fat face.

“I ain’t doin’ no fuckin’ French drag show, Butts, just cuz the likes of you thinks there’s money in it!” He puts his cigarette out on Butt’s two-tone loafer. Despite the “acting out” on the part of ol’ blue eyes, Butts coolly stares at the corner of the room as if deeply enjoying his smoke in a leather chair at the Harvard club. “I ain’t sayin’ nuttin’ cuz I know you’re gonna do it.”

“I ain’t DOIN’ nuttin’!” Frank snaps back. “Honey.” He gingerly pats Butts’ fat cheek, indicating he could do much more damage if so inclined. Frank abrubtly turns like some Westchester broad whose honor has been challenged. But underneath that hauty sashay to the other side of the room, Butts knows the crooner has been bitten. Look at him, Butts thinks to himself—lighting another cigarette, inhaling then exhaling like a five-bit hooker on a ten bit jag.

Butts looks down at the turntable. Without a word he resets the needle. The staticky contact sound fills the room. He turns up the volume. “This chick’s got it,” he comments, trying to conceal excessive enthusiasm. “We’ve been trying to move that Peggy Lee dame in this direction, but this chick, this song: My momma’s lasagna!”

The song begins in its slow, cloying manner. Frank listens, wincing, at the “wonderful” femininity of it all, now wincing at the stereophonic thought of Peggy Lee in tow. Shit. These chicks don’t know nothin’! They come out of friggin’ kitchens not knowing what to do in the clubs. The guys try to make them feel comfortable. Next thing they pull out that pussy whip.

“Shit,” Frank mutters to himself. “I could do circles around that dame.”

Cigarette. Cigar. Like two smoking bulls, the music baiting them to combat. Smoke licks the surface of the mauve Miami ceiling like the devil’s tail looking for a crack into Eden. Something here can only be contained for so long.

Suddenly, after an acutely emotional turn of French phrase that tweaks the atmosphere of the room like a chant-song, Frank belts out, “I’ll do it, Butts! Just ta prove I’m the greatest! I’ll do it! But be sure, I’ll do it MY WAY…MY-Y-Y WA-A-A-Y!”

He nervously inhales smoke, one quick puff after another, while Edith breathily states she regrets not a thing.

“Regrets?” Frank says nearly coughing. “I’ve had a few, Butts, baby. But then again, too few to mention! Because—dammit, Butts—I’m the friggin’ chairman of the board!” Frank is visibly shaking. The thought of a French chick one-upping his manhood is bringing on what the doctors might call a fit of hysteria.

“Calm down, Frankie,” Butts says, gesturing downward with the palms of his hands. “It scares me when you get like this.”

“Like what, Buttsie, what? You referrin’ to that little incident in the alley the other day? Hey, I did what I had to do. Ya gotta see some things through!”

Butts, a bit shaky, takes a puff. “That’s for certain.”

“The French think they know about everything!” Frank scoffs and with his cigarette in his mouth Frank raises both hands above his head, goose-stepping about the room puffing quick belts of smoke in a mechanical cacophony.

“What’s that? A touchdown?” Butts asks, gesturing with his cigar at Franks up-raised arms. “Stop it. You look like a bohemian cheerleader.”

“Non!” Frank retorts briskly turning his head to Butts. “I am but a French soldier, raising my arms in France’s best military maneuver: The “Je surrender” formation.”

“My life’s been full, baby!” Frank says, pointing with his cigarette at Butts for emphasis. “A traffic jam down each and every byway! And traffic jams of life, baby. You understand, Butts? With SMOG!”

“Sure Frankie, anything you say,” Butts says sheepishly. “A traffic jam of life.”

“Me and that French bitch are going to the highway, baby. A drag race on THE HIGHWAY OF LIFE, BABY!”

“Frankie, what are you smoking?”

“But you know, Butts! I don’t let it push me around, Butts. And don’t YOU ever push me around, Cabrera, cuz I AM…I AM…the chairman of the board! And I do it MY WAY! Hear that, buddy-o?”

JOE MAYNARD is an artist/writer/musician living in Brooklyn.

fter achieving best-seller status in his mid 40s, French novelist who comes from a long line of organists and is himself an accomplished cellist, abruptly cancels an international music festival he founded only four years earlier and severs ties with another music festival he co-directs. He also ceases his own public cello performances. The motivation behind these actions becomes clearer two years later when he publishes a book titled La haine de la musique (The Hatred of Music).

When Westbeth Artists Housing opened in 1970, it was a radical model for communal living in a city that was increasingly unaffordable for most artists. The photobook is an attempt to celebrate this colorful community and a last-ditch effort at preserving this fading element of the city’s cultural heritage.

Waking Up from Anesthesia: Decline and Violence in France

In May 2021, Interior Minister Gerald Darmanin, in a sign of full support of “his troops,” participated in a protest organized by French police unions. Gathered outside the National Assembly, they accused the justice system of failing them, of being too lenient towards rising criminality. Yet French prisons are severely overpopulated and the numbers of those incarcerated have never been as high as today.