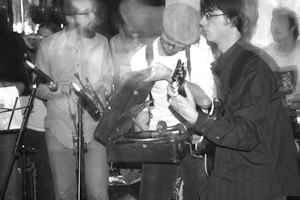 “Most people, when you talk to them, aren’t really saying what they mean,” says drummer extraordinaire Kenny Wollesen. “ They’ve always got some kind of thing they’re fronting. But when you go to a place like Zebulon, you really take something away. There’s a real communication that happens there. It’s not even about words. Part of the reason, I think, is that these guys are Europeans. Being French, they’re more sincere.”

More sincere, for sure, than the overabundant, irony-laden, dive-chic hangouts in the area. Zebulon, the music cafe on Wythe Ave. in Williamsburg, is as diverse as it is high-cultured. Run and staffed by musicians from around the world, the place is steeped in a multitude of music traditions—it’s not unusual to see Griot singer Baye Kouyate leave his place behind the bar to lend someone his talking drum. Here, it’s OK to admit to your friend, or a total stranger, that you really do like the music.

Kenny Wollesen, born in the four corners of America, has been playing music his whole life. Since the late eighties, shortly after he moved here from Santa Cruz, he’s recorded and toured with a host of legendary jazz and avant-garde players including Tom Waits, John Lurie, and John Zorn. He’s a member of the long-running Sex Mob, and was a co-founder of the Klezmorim, a group that fused klezmer with rock and jazz. Kenny’s talent might be described as the ability to capture what’s indispensable in a given musical tradition—be it New Orleans jazz, afro-Cuban, or klezmer—and raze its boundaries with his own imagination, which is transmitted by the subtlest of signals to his fellow players. His latest project is the marching band, most recently known as the Himalayas (aka Slam and other monikers—more surely to come), conceived with saxophonist Jonathan Haffner when Zebulon opened in July 2004.

“Joce and Jef [Soubrian, proprietors of Zebulon along with Guillaume Blestel] have real specific ideas in mind for their aesthetic—for the bar and for the music they bring in,” Kenny says. “But they told me to do whatever I want. And those are the magic words, man. So we did the marching band. I’m about playing anywhere. We take the band through the streets year-round—organize parades, events, whatever. That’s where the hippest people are, out on the street. The people who stop and listen on their way. They would never come to Zebulon, because you know they can’t afford it, or it’s just not their kind of place. I’ve played in a lot of places; playing on the streets is way heavier than playing in Carnegie Hall.”

Even though Zebulon has no dance floor and limited seating, the atmosphere when the marching band plays becomes as spacious as Prospect Park (where Kenny performed last year with a two-hundred-person band). Kenny will leave the stage area with the bass drum strapped to his shoulders and wander the bar, trailing an imaginary procession. On stage he’s also a conductor, guiding the anarchic modes of the fifteen-plus-member band through endless styles.

Zebulon records every show. They also broadcast them on the web and archive the recordings for download (from zebuloncafeconcert.com). The club released a CD last year, a compilation titled This Is It; volume two will be released this month. Also in the works is a record of the marching band, bringing together high points of over fifty hours of live performances. When we talked, Kenny wasn’t sure what the band would be called at that point; the name keeps changing. I mentioned an ancient Chinese proverb: “Once you give something a name, it begins to die.” “Yeah,” Kenny said, “maybe that’s why we keep shedding ours.”

We discussed the record as a post-download-era experiment. The hyper-availability of music lets us bypass the experience of discovering it, of participating in its communication, similar to the way computers and cell phones allow us to avoid committing things to memory. Performances by Kenny’s band are certainly memorable—can that experience be transferred to a cardboard-sleeved CD?

“You can’t play two shows a week and pay for rent, like you could in the forties,” Kenny says. “But at the same time, I think music should be free. If you look at traditions of music, in every culture, it’s a public happening, and it’s free. You don’t have to pay to hear it. Now nobody has to pay for records anymore. I love records. I’ve got rooms full of records and CDs. But I don’t think it’s necessary to make them any more. Everything is being recorded. Every time we play a show at Zebulon they’re recording. And everywhere else I play, someone is in the audience recording. What we’re doing now is thinking about making a pop record. It’s not impossible to have a hit without vocals.” 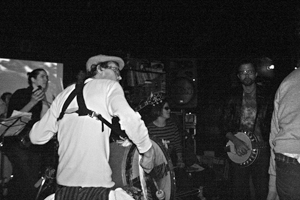 Zebulon is an ideal club for musicians like Kenny Wollesen to develop their sound. Admission is free, expectations are open, and Joce and Jef are among the biggest fans of the artists they book. “At least [Kenny] has the time to work on the many projects he’s working on,” Joce says, “and get as many people in as he can. We make it a special event when he plays. Every time. Everyone dancing and singing. He was really the first who was enthusiastic about us doing a music place. We knew Kenny would be a central guy. There are few guys you can count on, but he is one of them.”

Asked about who they plan to book in the future, Jef says, “We don’t know much about our schedule. When we began we knew a lot of jazz musicians, and right now we are looking in other directions. We’ve had other musicians from around the world, from Africa, from Asia.” In mid-March, Kenny’s band will be at Zebulon for five nights, with guest conductor Butch Morris, with sets at 7:00 and 9:00—“so you early birds won’t be too early for these shows,” he says.

The first time I saw Kenny’s band play they mixed Cajun jazz with Jamaican beats. When I saw them two weeks later, at the end of January (in celebration of the Chinese New Year), they started off with funky fusion before settling into more traditional Cajun for a while, then ended the first set with a wonderful disco jam. The myriad styles the band covers are traversed seamlessly—the genre terms I use are only a rough approximation. When they play it’s not about checking off one style after another; it’s the band, playing what is most necessary and most natural to the moment. And all the players contribute to this. Trombonist Reut Regev’s solo in the first set was played more soulfully, and memorably, than anything I’ve heard in some time. Regev drew more and more quickly, until it sounded like she was beat-boxing from behind the horn. Then Kenny reappeared from the street (yes he leads much of the band on marches during indoor gigs as well), and once all the players regained their positions he raised his drum to the rafters, rafters strung of red Moroccan lanterns that seemingly blinked to the beat, and he gave the drum a strong thump, and the band rejoined.

The band opens and closes their shows with a rich rendition of the bluegrass traditional “Down to the River to Pray,” beginning in somber, reverent unison. Then bass player Tim Luntzel hooks the backbeat, grooves on it, lets the percussionists play with it for a while. Kenny steps into the center of the stage, throws his sticks up in the air, quiets things, slams his drum, and it’s all back in swing.

Part of celebrating the Chinese new year has to do with shouting “Happy New Year!”—which the band did several times. The echo that reverberated after the three-and-a-half-week delay since the other new year was grossly refreshing: Why rush things? It was like being granted a second chance.

On Kenny’s bass drum is written: AN INJURY TO ONE IS AN INJURY TO ALL: when he hits the drum we all feel the message that’s passed.

California-born artist Kenny Scharf, who made a name for himself in the 1980s East Village street art scene, is having his second solo show at TOTAH, on view through June 25, consisting of paintings and two works involving the bodies of TV sets. Titled WOODZ ’N THINGZ, the exhibition opened the day before Earth Day and many of the works, all dated 2022, respond to the dire health of the planet, a long-time concern of the artist. I sat down with him at the gallery during his first visit back to New York in three years.