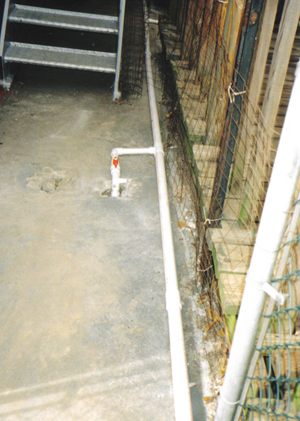 Drilling for oil in Greenpoint. Photo courtesy of Dorthy Swick

It was a hot day in July 1996 when Dorothy Swick started smelling chemicals in the basement of her Greenpoint home. She scoured the sheetrock walls and barren concrete floor for clues, but found nothing. The smell, meanwhile, got so bad that she had to cover her face with a t-shirt when she went downstairs to check the boiler.

Swick thought it might be a problem with sewage, so she called the fire department to flush the outside drains—temporarily killing the odor. But a few days later, on another hot day, the smell returned. When Swick discovered a softball-sized hole under her neighbor’s deck, about 12 inches from her property line, she wasn’t surprised to find the same nasty odor that haunted her basement emanating from the hole.

Swick knew her home on Hausman Street sat directly above an oil spill that lies 40 feet beneath Greenpoint. It was discovered in 1978 by the Coast Guard—and BP, Exxon Mobil, and Chevron Texaco have been trying to recover the oil ever since. The more than 50-acre puddle extends under Swick’s neighborhood from Newtown Creek to just south of Greenpoint Avenue, to residential blocks such as Hausman and Apollo Streets. When it was discovered, it was nearly twice the size of the Exxon Valdez spill.

Swick knew none of these details when she first smelled the stench. Nor did she know how dangerous the vapors were. But the smell was strong enough to bring tears to her eyes.

“You never forget it once you smell it. It smelled like chemicals with gasoline,” she says, shaking her head. Seated at the dining room table of her first-floor apartment, Swick looks at a read-out she retrieved from a large plastic bin containing vapor-related photos, a notebook, and various documents given to her over the years by the Department of Environmental Conservation (DEC). A 1997 document given to her by the DEC lists several chemicals that department workers identified in her basement. One is PERC, a chemical harmful to the liver and kidneys. A read-out from her neighbor’s basement, also given to her by the DEC, lists benzene, a known human carcinogen. Swick says the DEC workers never told her about the dangers the chemicals posed.

Swick talks like she’s from Brooklyn, often taking long pauses to emphasize her point. At 70, she has short salt-and-pepper hair that curls in the front, and deep smile lines—when she finds reason to smile. She grew up in Greenpoint, and bought the building on Hausman Street 30 years ago. Her home is on a quiet block lined with American flags, and is only a short walk from the deserted industrial section of East Greenpoint and the oil-laden Newtown Creek, which separates Queens and Brooklyn.

In December, Swick and 22 neighborhood residents filed a class action lawsuit against Exxon Mobil, BP, and Chevron Texaco. Swick wants to know what harm the vapors coming from below her house can do—which she says neither the DEC nor the Department of Health (DOH) have adequately determined—and, furthermore, she wants the spill cleaned up. An additional lawsuit was filed in 2004 by Riverkeeper, an environmental watchdog, because of the spill’s seepage into Newtown Creek.

Justin Bloom, an attorney for the class action suit, says that plaintiffs should expect a fight. “The oil companies have plenty of money to put toward their legal defense, and I’m sure they’re not going to be afraid of litigating,” he says. “I wouldn’t be surprised if they spend more money on legal fees than they do on remediation.”

Shortly after the class action suit was filed, Erin Brockovich (yes, that Erin Brockovich) gathered plaintiffs and potential plaintiffs at the Swinging Sixties Senior Center in Williamsburg for a pep talk. Anyone on the fence about the suit was urged to join. Only about 60 residents showed up, but having the support of the bona fide celebrity crusader (who looks a lot like Julia Roberts) was enough for Swick. “At least somebody cares about what’s going on,” she says.

A month later, at a community meeting on January 25, hundreds of residents crowded the Princess Manor’s massive mirrored catering hall, angrily interrupting oil company reps and government officials who came to announce that recovering the remaining nine million gallons of the 17-million-gallon spill could take another 20 years. Because the spill is so far below the surface, a spokesman said, and in a heavily inhabited area—unlike the Valdez spill, which was a remote surface spill—it will take far longer to clean up.

Jane Pedota called the meeting “a farce” and said she was outraged that it would take so much time to finish the project. Pedota, 52, has lived down the street from Swick for 27 years, and is also a plaintiff in the class action suit. “This is 2006,” she says. “There’s a lot more technology out there than there was 20 years ago. I bet they can clean it up in five years.”

Pedota still notices the toxic-smelling fumes in her hallway during the summer, and suspects the high concentration of “unusual” illnesses on her block of Hausman Street might have something to do with those fumes.

A spokeswoman for the DEC said in an email message that investigations have “not indicated impact on residences above the plume,” but that tests on the effects of the vapors will be conducted later this year. The DOH, which monitors health problems associated with the spill, had no comment for this article.

Robert Goldstein, an attorney with Riverkeeper, says a single case like Swick’s warrants a comprehensive study of the area above the spill to assess vapor damage. So far, he says, the DEC has conducted no such study. Data compiled by Riverkeeper reports that the alarming amount of methane in the soil above the spill has “by and large” been ignored by the DEC. Residents such as Doreen Sudano, who lives down the street from Swick and is also part of the lawsuit, say that the State’s response has been “horrible.”

“They haven’t been doing anything,” says Sudano. “Nobody’s been coming around or taking air samples.”

Swick admits she didn’t press the DEC hard enough 10 years ago to tell her what kinds of damages the vapors might cause. But she had other things on her mind: her husband of more than 30 years, Edward, had been diagnosed with liver cancer, and Swick was busy shuttling him back and forth between their home in Greenpoint and Park Slope’s Methodist Hospital for chemotherapy.

“I just told them, ‘Please clean it up. I have other priorities and I can’t be bothered,’” she said. “I signed a letter to Mobil that they can have access to the house, to the yard, and to the cellar. ‘But please clean it up,’ I said.”

Over the next three years, Exxon Mobil engineers came and went, collecting samples from Swick’s basement. The DEC sealed the concrete floor and sheetrock walls with a glossy industrial sealant. Large chemical drums were set up alongside white pipes that boxed in the yard, releasing the vapor from the basement into the air. On days between chemotherapy sessions, her husband let the teams of engineers and DEC workers into the basement and backyard.

As she rummages through the plastic bin on her dining room table, Swick sighs. “One time I came home,” she says, pointing to photos of her backyard after a three-story filtration system was set up, “and it looked like a damn oil well in my backyard.” When it rained one December, the smell got so bad that the DEC was forced to expand the ventilation system, installing a pipe on the side of Swick’s building that extended well beyond the roof. A rotating fan at the mouth of the pipe whirled the vapor away from her home.

In 1999, three years after being diagnosed with liver cancer, Swick’s husband died. Swick says she doesn’t know if the spill had anything to do with it.

At the time, the smell from Swick’s basement was as strong as ever. She worried that the stink might never go away. When she contemplated with a DEC worker what would happen if the massive piping system didn’t work, he told her that Mobil would have to buy the house. “I said, ‘Well I’m not selling, because I know what they’ll do. They’ll take the house down and wreck the neighborhood.’”

Luckily, Swick didn’t have to sell. By May 2003, the stench had dissipated and most of the filtration system had been dismantled. The few pipes that remain in Swick’s yard today are buried underground. While she’s relieved that the smell is mostly gone—except when it rains or in the heat of summer—she’s not convinced the state agencies have done their job assessing the vapors.

At the community meeting in January, a DOH official reported that, to date, data collected by the state does not indicate vapor intrusion on homes above the spill. While such dismissals make Swick cringe, she won’t be deterred.

“I’m not getting sick from this thing,” she says. “I’m going to live to make sure it gets clean.”

Tim Stelloh is a writer who lives in Manhattan.

From the Threshing Floor

Threshold: the magnitude or intensity that must be exceeded for a certain reaction, phenomenon, result or condition to occur or be manifested.

Notes on The New Threshing Floor

Cedar Sigo, the Bagley-Wright lecturer for 2019, has just completed work with Joy Harjo and several other poets on a new Norton Anthology of Native Nations Poetry and his recent 2019 poetry has appeared in Harper’s, Freak Fam, and Splinter. He currently lives in Lofall, Washington.