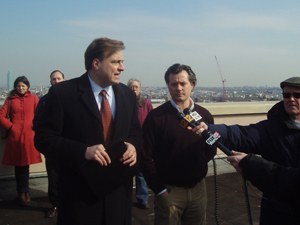 A brisk but clear morning high atop the roof of the former Esquire Shoe Polish Building in Williamsburg brought out the latest effort in putting public focus on massive and often uncontrolled development in this part of Brooklyn. In front of a few TV camera crews, Jay DiLorenzo, president of the Preservation League of New York State joined Ward Dennis of the Waterfront Preservation Alliance of Greenpoint and Williamsburg to announce that the League has listed the industrial architecture of the area as one of its “Seven to Save” in New York State. The League’s purpose is to highlight the most endangered places in the state regarding the preservation of historic buildings, districts, and landscapes. DiLorenzo said that his organization’s objective is to “balance historical preservation and community character with new development.”

While the League doesn’t have any formal relationship with the New York City Landmarks Preservation Commission, the designation is intended to put “strategic attention and extra effort,” as DiLorenzo put it, on important areas up against significant and rapid development. Other areas include Kingston in upstate New York, where there are community efforts much like that in Williamsburg-Greenpoint not only to preserve local character but also to maintain mixed low-rise and pedestrian-friendly communities that can revitalize public use of an underutilized waterfront. “All up and down the river, industry used to keep people away. But now they are coming back. Communities that take advantage of their history are better in the long run,” DiLorenzo said.

From the roof of the Shoe Polish Building—one of the first large post-industrial structures in the neighborhood to turn into a residential tower—the character of the area was clear: industrial factory buildings, some nicer than others, with swaths of “walk to work,” low-lying, working-class housing stock. But from 10 or so stories up, the rising skeleton of the luxury “finger building” on North 7th, and the almost completed tower on McCarren Park looked even more egregious than from the ground, as if they would replicate the awkward green presence of the Citicorp building in Long Island City. Of course, the “character” of a neighborhood is always changing but in most rapidly gentrified neighborhoods—such as Tribeca, SoHo, and DUMBO—there came to be an understanding, forced or not, that a certain aesthetic continuity not only paid homage to the past but benefited the feeling of an area in the long run.

It seems relatively clear that developers have come into the Williamsburg-Greenpoint area with a different idea: “arty” people like tall, sleek, postmodern structures, not the industrial—read: dirty—aesthetic. Maybe it’s true that the area didn’t have the same concentration of wrought iron as SoHo or massive loft space as DUMBO, but the Municipal Art Society found significant reasons to review the area after it saw the required Environmental Impact Statement (EIS) that the city produced before the area’s rezoning last spring. Beginning in December 2004, the Society surveyed all 182 blocks that the city went on to rezone, identifying 264 buildings and historic districts (including manufacturing buildings, 19th century rowhouses, churches, synagogues, banks, and schools) in the area that appear eligible for listing on the state and National Register but were not included in the EIS.

Unfortunately, the Municipal Art Society, much like the State Preservation League, can only make recommendations and try to influence the New York City Landmarks Preservation Commission. But without strong advocacy from area politicians and city council members it’s a difficult battle. Such was the recent fate of the effort to landmark the Austin-Nichols building on Kent Avenue in Williamsburg, where, led by developer-friendly local Councilman, David Yassky, the city council overturned the landmark designation and even overrode a surprise veto by Mayor Bloomberg, who himself is certainly no enemy of developers.

Compared to other Northeast cities like Boston, New York politicians are rather infamous for the anemic attitude to landmarking and regulating development. But that could change. Landmarking is one proven and tangible strategy that community groups have to keep a permanent foothold in a given area. And while politicians can easily fall into the deep pockets of developers, they also want to stay in office. “Politicians and municipal officials are open to pressure from their constituents,” DiLorenzo said, the tall cranes of a community in rapid development visible behind him. “Some are more engaged than others. But it should be seen that preservation is not a stumbling block but a stepping stone to livable communities.”