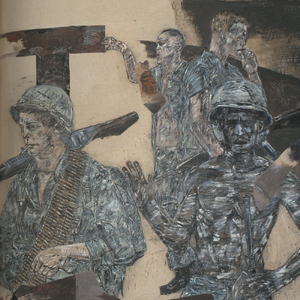 Soon, it will be seven months since my brother Mark’s youngest child, Marine Lance Cpl. Chase Johnson Comley, was killed in Iraq, his face blown off by a massive, vehicular suicide bomb. My nephew was sent to Dover in a transfer tube, George Bush’s euphemism for body bag, and remained there five days while he was assessed for presentation at funeral. Chase returned to Kentucky, his head wrapped completely in gauze.

Although I didn’t see Chase’s body, the image of his corpse was in my mind for months. Only recently have I been able to think of him and see his blue eyes and wonderful smile.

Rep. John Murtha says that “war sears the soul.” He’s right. It sears the souls of those who fight as well as those who see the flag-draped coffin of someone they love. My sister’s words on the morning of August 7th are branded on my psyche as I try to sleep and when I awaken, entering my consciousness throughout the day: “Chase was killed in Iraq last night.” The new normal for my family resides in this sentence. It is a place no one wants to remain, but it is impossible to leave. Chase’s absence is so present. Each day brings another serving of grief.

We tried to talk Chase out of enlisting, but he was enticed by the bravado of the Marines, their slogans, and the uniform. He said he didn’t want to settle for second best when he could be first. Even when he came home after boot camp, I told him to refuse to go to Iraq. “The war is wrong. It’s about oil and greed.” But Chase thought he was doing something noble. He believed Bush’s link between Saddam Hussein and 9/11. When the president said the terrorists wanted to crush our way of life and our freedoms, Chase was ready to fight. Sadly, my nephew and so many other young men and women trusted an administration that values hegemony over human lives.

The White House sold this war to the public by manipulating patriotism and fear. Bush, Cheney, Rumsfeld, Rice, Powell, Perle, and Wolfowitz continued to emphasize that evildoers wanted to destroy our values.

To preserve these principles, we must confront our foreign policy ethics.

After our loss in Viet Nam, the Reagan Administration embraced proxy wars, Henry Kissinger’s concept. Terrorists were trained and used to fight regimes in countries such as Nicaragua, Angola, Afghanistan and others considered pro-Soviet. In other words, the Reagan Doctrine supported the use of terrorist movements in the fight against communism. Remember, the CIA created Osama bin Laden to fight the Soviets in Afghanistan. This, obviously, backfired.

The military power we harness to inflict our will freely on others has resulted in tragic consequences for the people who live in those countries. During the first Gulf War, we used aerial bombardment of Iraq, killing countless civilians. Economic sanctions were imposed. The rationale for these in 1990 through the UN Security Council shifted as much as the reasons have for invading Iraq in 2003, but the effect of those actions proved deadly, especially for Iraqi children. It is estimated that a half million died as a result.

Certainly, these policy standards fueled Muslim rage, turning terrorism into nationalism. By waging a preemptive war on a sovereign nation, George W. Bush pasted together a “coalition,” despite disapproval from much of the world. With “Shock and Awe,” he provoked even more animosity from potential terrorists who saw the war as an attack against all Muslims.

Even with the knowledge that hindsight brings, our administration still refuses to admit its colossal mistakes—the biggest, of course, is going to war in the first place. Then, there are the abuses at Abu Ghraib and Guantanamo Bay, the unending detentions, underestimating the insurgency, inadequate body armor, and no exit plan. The White House asserts success simply because so many Iraqis went to the voting booths. But the outcome of the election which supports an Iranian-like theocracy is not what Bush and Co. had in mind. Sectarian violence is now plunging Iraq into civil war—something so many predicted. An explosion which destroyed a Shia holy shrine has led to reprisals against Sunni mosques. Certainly, our incursion which was supposed to be a “cakewalk” is a tragedy of errors.

American greed and arrogance have reached a crescendo under George W. Bush whose “might makes right” mantra emboldens him to rouse nationalistic fervor to possess more and more of Earth’s resources. Our appetite for consumption is as huge as the Bush Administration’s hubris.

This is what killed my nephew, Chase J. Comley, and 2,279 of his fellow American troops. This is the reason almost 17,000 soldiers have been wounded, some severely with double and triple amputations. This is why there are more than 100,000 Iraqi dead.

Someone recently said to my brother: “Your son died so that we can do what we’re doing right now—shop, go about our daily lives, and say what we want to say when we want to say it.” That was said with good intention. This thinking is, however, a disconnect from truth. The terrorists are less interested in these mundane activities than they are in the grasp we hold on their lives, their countries, their oil, and their beliefs. The 9/11 attack on our soil was barbaric and indefensible, but so are the atrocities we’ve committed under a veil of goodwill and Democracy.

My family’s loss—so many families’ losses—are due to an administration that seizes what it wants from other countries with no ethical regard for consequences. It lies to its citizens to get elected. It lies to sell war. It lies to its young with promises of travel and education. It lies for oil and for power. And in the process, the warmongers have not only changed our lives forever, they’ve damaged our humanity.

Beattie is a novel writer and political article author. She lives in NYC.

A chessboard drawn by the child Kuba

Erín Moure’s most recent poetry is The Elements (Toronto: House of Anansi) and most recent translation is Uxío Novoneyra’s The Uplands: Book of the Courel and other poems (El Paso: Veliz Books) from Galician. She folds paper in Montreal.

This month, we bring you two works that explore the isolating effects of grief. In her short story “To the Sea,” Sharon Adarlo uses magical realism to explore the way a tragic event can change us. The protagonist at the center is so consumed by her grief after the death of her child that she must endure a kind of supernatural growth to overcome it. Beatriz Bracher structures novels—Antonio is the second of her four novels to be translated into English and published by New Directions—around the peculiarities of narrative: uncertain recollections, overlooked characters, and crucial details hidden in plain sight. This novel’s central character, Benjamim, father to the titular Antonio, seeks the details of his own father’s life. But rather than follow Benjamim on the case, we're reading the fragments he collects. As readers, we’re substitute-detectives sorting through the accounts of three narrators and pinning our own red thread to the evidence.