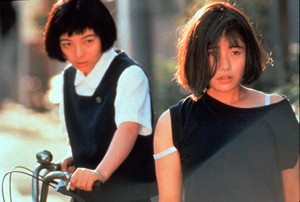 Down the Drain image © PIA/PONY CANYON

About ten years ago Walter Reade hosted a series of new independent Japanese films. At the time Japanese cinema seemed to be in a lull. Kurosawa’s heyday was long over. New wave stalwarts like Oshima and Imamura were laying low. There were the occasional incidental indie releases like Okoge (a Japanese slang word equivalent to ‘fag-hag’) which offered a rare glimpse at gay life in Japan, and kinky-sex obsessed novelist Ryu Murakami’s directorial debut Tokyo Decadence. Still, it felt like new Japanese films were seldom seen stateside. The Walter Reade series offered a rare and illuminating peek at an independent spirit trying to keep cinema alive in Japan.

Since then we’ve seen auteurs such as Miike and Kurosawa (Kiyoshi, not Akira) transcend the realms of ‘V Cinema’ (Japan’s straight to video market) and become internationally known ‘artistes.’ Their films prove ‘program pictures’ (a term used in Japan to describe b-level genre films) leave room for expressive innovation, despite inherent genre limitations. Meanwhile J-horror has opened the floodgates, spearheading the remake phenomenon with films like Ringu and Ju-on (The Ring and The Grudge).

Japan Society’s spring film series, Against the Tide: Rebels and Mavericks in Contemporary Japanese Film not only offers a look at more recent works but also includes a few older, influential films, and thus traces the evolution of current trends in Japanese cinema. The binding theme is, interestingly enough, that people cannot or will not conform—a provocative paradigm coming from a society which traditionally values national identity over individualism.

My favorite film from the Walter Reade series, Down the Drain (Hadashi no Pikunikku, lit. trans. ‘Barefoot Picnic’) reappears here, getting another chance to freak out an audience. This 16 mm comedy of errors concerns a high school girl and how her life turns upside down after she gets caught scamming a free ride on the subway. It starts off unassumingly but escalates at an unrelenting pace, finally snowballing into a high powered cartoon of itself—definitely the manga (Japanese comics) influence at work. This was the first feature from Shinobu Yaguchi, who in subsequent work explores his recurrent trope: The underdog in the face of tragic-comic happenstance. 2003’s Waterboys, the story of a high school boys synchronized swimming team was a domestic box office smash. Yaguchi’s comic flair was still intact, but he had definitely entered the mainstream, leaving behind the more chaotic and subversive elements that drive Down the Drain.

Ozu established a Japanese cinematic tradition which glorified the family unit. Wild Berries, the debut feature of 28 year old woman director Miwa Nishikawa focuses on family dysfunction, a more recent trend seen in films such as Family Game or Sogo Ishi’s manic Crazy Family. Berries is also produced by Hirokazu Kore-Eda, whose own Nobody Knows revealed what could happen when the family unit literally breaks down.

Prolific Kinji Fukasaku, most known for his extremely tense, neorealist/surrealist and violent films, has inspired and influenced many contemporary Japanese filmmakers. Here he is represented by one of his wound-up cops and robbers potboilers Yakuza Graveyard. Beyond having a rebellious, Dirty Harry cop for a protagonist, it’s quite a maverick piece because, like Tai Kato’s A Man’s Face is his Resume, it deals with an issue of race, specifically Koreans in Japan. The same issue is dealt with brutally in Rikidozan, the true story of a Korean-Japanese pro wrestler.

You can’t have a contemporary Japanese film fest without the prolific, punk rock loving, international star Tadanobu Asano. Here he appears in Kaza-Hana, the last film by the highly respected Shinji Somai. But perhaps more enticing and potentially more provocative is Canary (also a top pick of the on-line Japanese film authority Midnight Eye). Its story of an adolescent involved with an Aum-like religious cult (Aum-shinrikyo was the religious group that perpetrated the sarin gas attack on the Tokyo subway) offers an examination of contemporary disaffected youth.

There are twelve titles in all offering an enlightening look at Japanese film and society. This cross section of films, if not pointing towards where Japanese cinema is headed, at least presents a reach at liberation by filmmakers and their protagonists alike.

Cambridge-educated Don Siegel may never have been a criminal, but the Film Forum’s glorious retrospective proves he had an affinity for the criminal mind. Opening the series is Charley Varrick, a thoughtful, witty caper flick with not a good guy in sight, nor any shortage of creeps and oddballs. Universal, the producing studio, abandoned the film on its initial release. Universal also dumped Varrick onto DVD with an equal lack of respect: the full frame disc barely has an FBI warning and nary a menu.

Based on John Reese’s novel “The Looters,” the story is pure pulp. No-nonsense Charley is a former stunt-pilot turned crop-duster with the motto “Last of the Independents.” With the combines running him out of business, Charley and his wife, together with a couple of petty crooks, turn to knocking off small banks. Can you say: ‘Socio-economic subtext’? The film begins with a fast-paced heist of a little rural bank that yields way more money than expected. Seems they unwittingly ripped off a mafia money-laundering station. Outrunning the law is one thing, but how will they escape the wrath of the mob?

This set up has all the trappings of classic film noir, the subculture wherein producer/director Siegel felt most at ease. Corruption, amorality and living on the outside of society, all perennial themes of Siegel’s, allow for ample feelings of dread. But despite a fatal error, in this case inadvertently stealing from the mob, our anti-heroic protagonist isn’t necessarily doomed from the start. Instead what unravels is akin to the macho fantasy leanings of a western. Charley remains one step ahead of his adversaries, always quick on his feet, always with a surefire plan. Casting salty everyman Walter Matthau as Charley was a bold choice considering Siegel made Varrick just after Dirty Harry with that much more traditional man’s man, Clint Eastwood.

Perhaps some of Don Siegel’s insight into criminal mentality came from working within the studio system. He started out at Warner Brothers as an editor. Siegel was stuck there for more than a decade. Jack Warner personally refused to let Siegel out of his editing contract because he so valued Siegel’s skill at montage. Siegel eventually stepped into the directing chair and left the studio soon after. Like his heroes, he preferred the uncertainty of working freelance in exchange for freedom. Charley’s crop-dusting motto, which was the film’s working title and also the title Siegel preferred for release, was self-descriptive. It’s no wonder Siegel was especially adept at crime films – the subversive nature spoke to his rebellious spirit.

Siegel wastes no time or space, weaving a tight, compelling tale with the subtle grace of the craftsman. Terse cross-cutting during the heist and subsequent getaway contrast with naturalistic establishing shots that elicit a stark realistic feel. The quiet realism of the intro proves unsettling when the camera sweeps across the bank and Charley’s masked cohorts suddenly leap into the frame, guns waving. The frame turns disturbingly claustrophobic as the camera closes in on Charley sticking his gun in the face of the sniveling bank manager (played to a milquetoast tee by Woodrow Parfrey).

One of the key Siegel trademarks, something for which he has been both lauded and reviled, is a blunt, frank approach to violence. There are car chases with hoods flying, shootouts where people actually die, explosions, a face off between a bi-plane and an automobile, a man in a wheelchair slammed against a wall and a woman slapped around. The latter signals a point of controversy in Siegel’s work, which was sometimes labeled misogynist. For better or worse, Siegel’s testosteronic action-fuelled universe (hell, his entire generation) had little place for women and he didn’t seem to know what to do with them. One of the film’s more flawed moments is an embarrassing scene where Matthau seduces a woman (Felicia Farr, real-life wife of Matthau buddy Jack Lemmon) on a circular bed. Matthau kept getting cast as a wicked smooth lothario; the contrast between his persona and his high scoring percentage always jarred.

While he might not have understood women, Siegel was able to rely on his actor’s chops to generate atmosphere and in this case we’re talking seedy with a capital S. A Rouge’s Gallery of archetypes are pushed to the hilt by a virtual who’s who of 70’s character types. Perennially sinister John Vernon makes a turn as a mob executive (one particularly creepy bit of mise en scene has him pushing an adolescent girl on a swing while speaking to an FBI agent). Andy Robinson, the doubly creepy psycho with a marionette’s face from Dirty Harry, is slightly toned down here as Charley’s alcoholic low-life partner in crime. And there’s Joe Don Baker as the dapper and sadistic mob hit man, Molly.

Throughout Charley Varrick, and much of Siegel’s oeuvre, brutal acts are usually committed without remorse. Conventional morality, not unlike in Boorman’s Point Blank or a Leone western, has been tossed out the window in exchange for capital gain. This leaves the characters driven by their steadfast conviction to action, allowing Siegel, ever faithful to genre confines, to achieve transcendence through violence.

By Edward Mendez and Laura Valenza

Our goal is to raise awareness of movies on film in need of preservation, of indie or experimental films that don't get the attention they deserve, and even of bigger productions that were cast aside for unjust political reasons. With advice from our contributors, the film editors present you with our winter 2022 list of the greatest films you’ll never see.