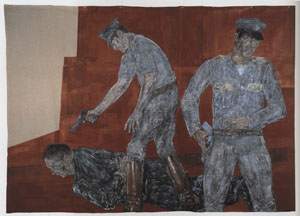 Ed.’s note: “Disarming Images,” a multi-channel video projection by Artists Against the War documenting worldwide demonstrations against the war in Iraq, was screened on November 10, 2005 at the School of Visual Arts Amphitheater on East 23rd Street in Manhattan, followed by a panel discussion with Ann Messner of Artists Against the War, Michael Shulan, co-founder of Here Is New York: A Democracy of Photographs, Paul Chan, artist and member of Voices in the Wilderness, and writer David Levi Strauss. Panelists were asked by moderator Barbara Pollack to respond to two questions: Can artists and writers play a role in creating a culture of dissent? and How do images influence public opinion during a time of war? This was David Levi Strauss’s response:

Now that it looks like things are finally beginning to fall apart for these thugs who have taken over the U.S. government, it’s difficult to know what worked, but one has to conclude that what we just saw documented in this video by Artists Against the War was at least a part of it. This we have to do, because this is what democracy looks like. And if we give it up because it seems like it’s not having any effect, then it’s not going to have any effect.

Recent polls show that nearly 70% of Americans now disapprove of the Bush administration’s handling of the war in Iraq and want to see a pullout, partial or complete. This is a big change. The most terrifying thing after 9/11 was not the threat from the Bin Laden gang of thugs, or the threat from the Bush gang of thugs, but rather the way the American people passively went along with Bush & Company. I first saw this level of conformity and managed consent during the first Gulf War under Bush the First, when what Jacques Ellul called “integration propaganda” (as distinct from “agitation propaganda”) was so complete thatpeople began to operate under a kind of collective amnesia.” People forgot, and just went along with it. When we organized and got 250,000 people out into the streets in San Francisco, the major news media mostly ignored it, or buried it, and the silence that fell over the land was terrifying.

At times like that and times like this, we’ve got to demonstrate, to go into the streets and demonstrate our objections, our non-compliance—not to make us feel better about ourselves, but to remain visible and audible to the powers-that-be. It’s not enough to complain quietly, and it’s not enough to “Click Here.” We have to act socially. (As Peter Fuller said, contemporary American artists have “every freedom except the one that matters: the freedom to act socially.”)

Demonstrations and protests are rehearsals for more aggressive mass action and occupations. Demonstrations are, literally, warnings—that’s the verb, in Latin, monere, to warn. We’re demonstrating the strength of the people and saying “Change the way you’re doing things in our name, or we will stop you.” And we’ve come very close to the need for these more aggressive actions in the past four years in this country. Maybe we will come just short of that in the next three years. I hope that we will. If we can stop these thugs short of that, by other means—legal, judicial, legislative, through media spectacles—I’m all for that, first.

But we must not forget that people, other people halfway around the world, are suffering and dying because of our actions and inactions. The fact that we can’t see them or hear them doesn’t make it any less real. Or does it?

People don’t believe in reality anymore. They believe in images. And this belief makes it possible for them to be manipulated through images. Images and words matter. The symbolic world, the world of phantasms, matters. We are all subject to it. And since this is where artists and writers go to work, I believe we have a special responsibility to try to unmask the propaganda and to decode the messages being sent out on American screens, and to try to counter them with different words and images—to imagine other ways of thinking and acting.

Over three years remain in the Bush presidency. That’s a long time for a lot more to go extremely wrong. “Aspens connected at the roots,” like Scooter Libby told Judith Miller. These thugs have got to go. The trouble is that the people who are working for them, especially the Image Management people, the “Imagineers,” are not thugs, or at least not in the same way. They are highly sophisticated manipulators of the public imaginary. To counter them requires a great deal more knowledge and finesse than we’ve been able to muster so far.

Lately, I’ve been thinking about the rest of the Abu Ghraib images (the ones we haven’t yet seen), and writing about the current struggle within the government over torture, and in the course of that I came across this quote from Donald Kuspit’s book on Leon Golub (The Existentialist/Activist Painter) that makes a very important connection, I think, between the critical spirit and manipulation or torture:

“The critical spirit is always in bondage. It always seeks to escape, and always exists in a tortured state, because it always questions existing values. What is valued in the modern world is manipulation, whether in crude or subtle form, and Golub’s art can be understood as a critique of manipulation writ large—made radically explicit—as torture. When manipulation forces, rather than ‘persuades’ to conformity, or when it does not succeed, it becomes torture, and destroys what it cannot ‘convince.’”

This is the line we’re on.