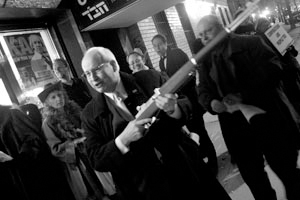 Watching the news, grinding your teeth, complaining that America is apathetic and people should really be out doing something…

People were: in 26 degree weather, in the darkness of the American night, heart of the gentrified East Village—Billionaires For Bush refused to let President’s Day pass without a good fuck you to the Cheney-Rove administration.

“Welcome to We Own The President’s Day!” they yelled on the streets. “We Own This Country! No One Counts But The Top One Percent!”

Billionaires for Bush, an activist group that dresses up like pukey rich people to mock our sold-out government, staged a press conference on the corner of 3rd & A with a Dick Cheney look-alike so creepy that I wanted to kick his ass.

“The resistance is demoralized, people feel hopeless” said Billionaire organizer Paul Bartlett aka Robin Eublind. “But we have to come out on President’s Day and make fun of Presidents.”

The press conference drew a crowd of more than 50 that took up all of the sidewalk and part of the intersection in front of the Pioneer Theater. Something was actually happening. There was energy. “I needed to see this tonight,” said a woman next to me. Another asked how she could get involved. I told her to check the Billionaires’ website.

“We make the streets of New York into the theater of dissent,” said Bartlett. “New Yorkers, media, politicians—they all become a part of our script.”

I yelled out at the Vice President to explain his position on Guantanamo Prison and indefinite detentions. “Why would I ever want to shut it down!” he bellowed. “It works great! And the camp is so far away that Americans never even have to think about it!”

“Mr. Vice President, what about Katrina and the aftermath?” asked another member of the liberal media. “Those people down there should have planned ahead!” Cheney yelled back.

Me again: “Mr. Vice President, do you have any reservations about wiretapping Americans?” “I do absolutely have reservations,” he said. “My wife Lynne and I are going to dinner tonight!”

Displaying this sick government on street corners is the medicine we need. This administration is leaving us in ruins: economically, socially, psychologically, physically. We’ve got to be confronted by it so we can confront it.

“We do street theater to expose the lies that are being swallowed in this country,” said Bartlett. “We don’t have a democracy, but a national illusion directed by Karl Rove and Karen Hughes.”

“I’ll answer your questions and I’m not drunk,” she slurred. “I’ve been only drinking Dr. Peppered…” as in getting peppered by a shotgun.

We talked beforehand about the effort and the grind. “Sometimes I look out at people and don’t even know if a better America is possible,” she said. “But what I do know is that we must have the courage to keep working at it.”

“I’m here because we’ve got to stop this machine,” said Billionaire Beth Smith aka Kiki Baxx. “America is like a horror movie. We get desensitized to the guy with the knife because a guy with a chainsaw is coming around the corner. We forget about tax cuts for the rich because every day brings us more war, secrecy, poverty, lies and destruction.”

The Billionaires were “the big group” during the RNC daze. Now, it’s a tight band of truehearts that maintain the fight. What’s next for the new B4B? What corner will they take over while the rest of the city is watching the news, complaining that somebody should really be out doing something…

Come to Your Census: Who Counts in America?

The core of the YBCA’s census awareness program was and still is a group exhibition titled Come to Your Census: Who Counts in America?, in which more than 20 artists, mostly from the Bay Area, could exhibit their work on citizenship and civic presence, supported by workshops and performances in line with the organization’s multidisciplinary program.