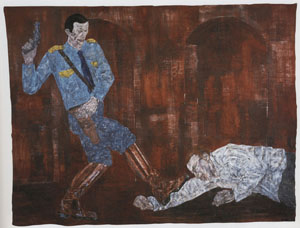 This is a clear infraction. The signal-to-noise barrier has been repeatedly violated in this sector. Irrational dogs roam the perimeter, barking in time. Do not abandon your vehicle; it will only make it harder for you. We will continue to entertain proposals from interested parties, but all resistance will eventually be crushed. We repeat: Do not attempt to leave your vehicle!

We send you greetings from the front. We have engaged the enemy and are taking heavy losses. The enemy is faceless, soul-less, and ubiquitous. Please think of us as you go about your daily business. Remember us in our fight. The signal war must go on. If the signal fades, we will all be lost, without direction or succor. We will wander the world like zombies.

The evil-doers are like that. They move from cave to cave in a deathlike state. No amount of signal can reach them now, because they are out of range and receiverless. We will hunt them down, drag them out of their holes, and bring them to justice. Signal will pour down on them like rain, until they are seized with fear and abandon their vehicles.

That whirling mass on the screen is the future. But make no mistake about it, that future is entirely preordained and inevitable. It was all written down long before these childish visions of the social appeared; long before this imagination of human agency. The modern was a dream from which we awoke sober, relieved, and determined.

Calm yourselves. Everything is in our hands now, and we will not let you down. We were chosen for this task before we were born. Though we wandered for a while in the wilderness, at the appointed time the signal reached us, and we were born again. When the towers were hit, our mission was written in the sky. Be of good cheer: We are at war, now and forever.

Wes Anderson’s delightful new film, The French Dispatch, is more than a love letter to American newspaper and magazine writers—it is a film committed to reveling in the craft of writing and storytelling.