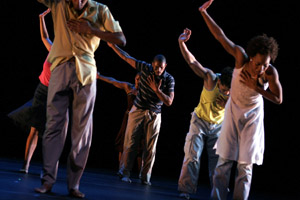 In its 20th anniversary run at the Joyce Theater, Ronald K. Brown/Evidence presented six works whose most resonant effects stem from the performers’ precision and strength.

They display a near uncanny mix of technical and expressive proficiency, such that a furrowed brow and a flick of the hips elicit as much audience excitement as recurring flawless double pirouettes and athletic leaps. Vibrant and complex, the dancers engage with both the movement and the audience to convey the “kinetic storytelling” Brown pursues. Their arms whirl and sweep away from their bodies, bringing them low to the ground or propelling them into numerous spins. Camille A. Brown exerts a special draw on the eye; her movements range from explosive extensions to polyrhythmic articulation, extending her presence far past her physical reach. She and the other dancers have mastered the company’s movement vocabulary, which references both Afro-Caribbean and historically African American styles while interspersing bounds evocative of balletic jetes.

And so it’s somewhat unfortunate that throughout both programs these brilliant dancers (the choreographer included) tend to perform similar movements within often predictable structures. It isn’t that the dancers fail to maintain their beauty, but rather that the sameness of Brown’s choreography lessens their effect.

The prevalence of symmetry, both spatially and between groups of dancers, as well as the way Brown disturbs such patterning, recurs in most of the pieces. In his tribute to Nina Simone, Come Ye (2003), dancers often appear in two groups of four, just as they do in the beginning of Upside Down (1998). In Walking Out the Dark (2002), they dance in alternating pairings, occupying symmetrical corners of the stage.

Though symmetry is an easy, comforting visual, it eliminates surprise. Its presentation as theme weakens the effect of any variation because it is so overpowering. Only sometimes does the symmetrical image appear as an obvious and effective choice, as in Walking Out the Dark, or in one section of Come Ye. In the latter, the dancers begin the piece in a left-to-right silhouetted line, facing front, arms down. They return to the same line later, fully lit, with arms raised in fists evoking images of the Black Power movement. The light allows us to see their sweat as it shimmers and slides off of their wet faces. The symmetry of the line references the solidarity called for by the movement, as the group of dancers exit the anonymous shadows to enter a definitive light.

The symmetrical groupings also often split along gender lines, with four men grouped apart from four women, or two and two. Even when the genders mix, it still tends toward an even distribution of men and women. In Grace (1999), this changes and the choreography allows the dancers their best opportunity to play to the audience. The opening music is a full-bodied, gospel vocal as Camille A. Brown enters in a flowing, white costume that exposes her back and the sides of her midsection. She is gradually joined by the other performers, whose red or white costumes either extend the line of dancers’ limbs or expose their powerful torsos. The score evolves to include deep bass pulses, inspiring hip and chest gyrations among some audience members. It’s by far the most crowd-pleasing of all the pieces, and in it Brown escapes the gendered structuring. Six of the eight dancers break into varying pairings and embrace. The sweaty hugs refresh and strengthen the emotion between the dancers, and the contrast of seeing two more dancers watching accentuates the effect of the embrace.

Such contact is rare; Brown’s dancers interact, but often at a distance. Perhaps this represents their strength and individualism, but it doesn’t seem that more physical contact could weaken that. Only in Walking Out the Dark is this lack of touch truly effective. The dancers get just close enough to fan their partner with a whoosh of air generated by a flung, arching arm. Such expansive but restricted movements seem to yearn for touch. The almost imperceptible distance between the dancers deepens their intimacy. When they finally do touch bodies they literally “butt heads”— the only physical connection that could accurately embody the frustration of their distanced closeness.

In the playbill, Brown says he hopes his audiences leave “with their spirits uplifted, their beauty understood, and a sense of our solidarity.” The problem is that he uses the same technique to gain a point of access into these themes in almost every piece. Instead of exploring multiple structures and completely different movements for each piece, Brown’s adherence to an often similar form limits the scope of the “solidarity” toward which he strives. As a result, his pieces must lean more upon the dancers’ skills, as opposed to a mutual reliance upon structure and performer. His dancers are almost brilliant enough to pick up the slack. Almost, but not quite.

Interested in ephemera, networks of distribution, and how materials are activated through circulation and use, Sullivan’s latest book translates an exhibition catalogue documenting ephemera (audio tapes, manuscripts, buttons, and books) from a 1984 show at Art Metropole into an artist book. This rendering shows that history and the archive are always ongoing, constantly being revised, added to, amended, redrawn, and redistributed.

If entelechy is the process by which something becomes what nature intended it to be—the fertilized egg becomes the human being, the acorn the oak tree—then Georg Baselitz leapfrogged it, springing, like Athena, fully grown from his own forehead.