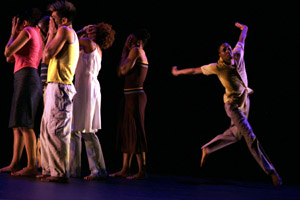 As reviewer Corey Harrower discusses, Ronald K. Brown/Evidence is all about community. The Rail asked some Evidence alumni to reflect back on their time with the company, and, what becomes quite clear here, is not only Brown’s commitment to dance that explores African American experience, but his penchant for fostering community and even a sense of the spiritual among his dancers. As these glowing commentaries show, his effects remain with dancers long after they’ve left the company.

I have always thought of my experience with Evidence as Divine Order. Dance is a language. When I met Ron and we began to work together, the movement vocabulary washed over me and it was as if I had been speaking his language for years. That movement sensibility is still in me. The environment was special as well. Ron saw the beauty in all of his dancers and created movement and told stories that allowed us, as individuals, to shine. As a result of my time there, I have formed some of the most wonderful friendships of my life that touch me in a deep, profound way. I feel very blessed to have had Ron and Evidence as a part of my journey.

Steven Washington was an Evidence company member from 1993 to 1999 and is currently a cast member of The Lion King.

During my seven years with the company, I blossomed into a strong force, both on and off stage. Ron provided me with the space and support I needed to grow and mature as an artist. I am so thankful. As a result of all that love and guidance, I received a Bessie Award (NYC Dance and Performance Award) for outstanding performance in Walking out The Dark, which led to my current contract with Nissan Infinity G35. In the “Infinity in Black” ad campaign which recognizes outstanding artists of African descent, I represent, or embody, the idea of performance.

Deidre Dawkins danced with Evidence from 1998 to 2004. She is currently the co-director of the DishiBem Traditional Dance Group based in Baltimore, Maryland, and she’ll be pursuing her MFA in dance at the University of Maryland, College Park. She’s also a new mom to her baby girl Serwaa.

I have been infinitely influenced by Ron. At the same time, what I do is quite different, though our vocabularies are related. I am a Caribbean person deeply influenced by the culture in which I grew up, so my work is filled with such afro-Caribbean references. When Ron began choreographing with those Caribbean movement vocabularies, my body was ecstatic. Because of him, I fell in love with speed, with quick bursts of movement that seemingly come from nowhere to appear and disappear at a moment’s notice. I am particularly attached to several Evidence pieces. His early work, Combat Review: Witches in Response is special for me (though I was not in the company then) because he began to tap into something very real for him. That piece addressed the impact of the AIDS epidemic on the black gay community, something at the time few were looking at in just that way. There was also a very diverse cast and all those dancers were fierce! I remember them dancing within inches of each other and turning and flying without an eye blinking. After that, I knew I had to work with him.

Dirt Road was my first performance with the company and I feel especially attached to this piece. Ron and I worked one-on-one to build a duet that he eventually transformed into an evening length work. It was about a black family and eventually the company became that family in play, in prayer, in celebration, in love and in loss. That piece took us around the country and across the seas.

I also loved Strange Fruit, a trio for myself, Rennee Redding-Jones and Teresa Lebron, which acknowledged what black families and the women in those families had to endure in the face of racism’s brutality. Ron’s works is “gut busting dance,” as Deborah Jowitt (Voice dance critic) says. It is visceral. It makes an audience feel something. It is redemptive. It is church.

CYNTHIA OLIVER is an award-winning choreographer, performing artist, and scholar. Her choreographies excavate the complicated nature of contemporary blackness in Afro-Caribbean and African American cultural production. She is Professor of dance at the University of Illinois, where she is also Associate Vice Chancellor for Research in the Humanities, Arts and Related Fields. Her choreographic work Virago-Man Dem premiered at Brooklyn Academy of Music's Next Wave Festival in October 2017.

Interested in ephemera, networks of distribution, and how materials are activated through circulation and use, Sullivan’s latest book translates an exhibition catalogue documenting ephemera (audio tapes, manuscripts, buttons, and books) from a 1984 show at Art Metropole into an artist book. This rendering shows that history and the archive are always ongoing, constantly being revised, added to, amended, redrawn, and redistributed.