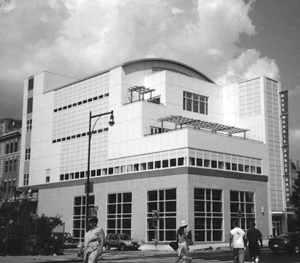 Photo is courtesy of the Mark Morris Dance Group

Joe Bowie, a dancer with the Mark Morris Dance Group for 16 years, sees the troupe’s Fort Greene home as maternal. David Leventhal, a nine-year company member and repertory teacher, calls it mysterious. Eva Nichols, the Director of Education, compares the center to an expanding, nurturing tree, like the company’s school logo. And Executive Director Nancy Umanoff thinks about the building in terms of its leaks. Ahh, home. As the company celebrates its 25th anniversary, it is approaching another milestone: Its fifth year working in the Mark Morris Dance Center.

Once a state-run mental outpatient clinic, the modern white building is now an extension of Mark Morris’ work and personality: Big, straightforward, and unapologetic. As Umanoff said, “It’s all about Mark. Every bit of it is about Mark. It’s hard to pinpoint these things, but they are built into the design.” Like his work and his personality, the building pleases and offends. It has ego. Some think the grandiose building is an eyesore with its stark exterior, rounded tin roof, small Japanese-inspired windows, and wooden trellises on two terraces overlooking Lafayette Avenue. It stands out from the classic opera house across the street and in a neighborhood full of old brownstones and architecture. At first glance, you don’t think it fits. But like his work, the physical structure of the building is streamlined, strong, and the rooms are practical and spacious. Morris is known for his lyrical approach to choreography, overt charm in large group pieces, an imposing personality, and a controlling nature. He is not always well received by others in the contemporary dance scene. But these same attributes contribute to his immense success with audiences and critics, giving him the support and confidence needed to build a large home reflecting his vision. That vision, simply put, is to provide adequate resources to strengthen both his company and dance in the community.

The formidable building has only one entrance. Once buzzed in, you find yourself in a small, echoing lobby. But the coldness subsides as the elevator opens to the third floor, where the administrative offices and dancers’ dressing rooms are located—an important set-up for Morris after years of having the administration in an office on Lafayette Street in SoHo and the company all over town. The common space is open and warm, not like an office at all. Even Morris’ private study feels more like a live-in studio than a workspace, with its lime-green paint, bathtub, and décor that ranges from religious iconography to two singing Billy the Bass hangings.

The 17 dancers are also given dressing rooms to decorate as they please—a space of their own. It is a gesture of respect, a significant one; like any office, employees should have their own desks to work from. There is a physical therapy suite with Pilates equipment, as well as three dance studios and a lounge, which, during classes, resemble a community center with children and adults spilling into the halls. When not in use, the studios are rented out at a subsidized rate. The largest one, measuring 60×60 feet, is mostly used for company rehearsals. It can also be converted into a 140-seat black-box theater, The James and Martha Duffy Performance Space.

The company found the abandoned building with the help of Bruce Ratner, the locally controversial developer, and Harvey Lichtenstein, the former director of the Brooklyn Academy of Music and present chairman of the BAM Local Development Corporation. The $7.4 million capital campaign to construct the center started in 1998, and the project was completed early in 2001 when the company moved in. Its renovation was most influenced by the company’s experience in Belgium. In 1988, Morris took residency at the Théâtre Royal de la Monnaie, the national opera house of Belgium, remaining there for three tempestuous years. The Mark Morris Dance Group, like many European dance companies, had financial support from the government, and the space and freedom to train and create as Morris pleased. While there, he made a series of dances, including L’Allegro, il Penseroso ed il Moderato, that many American critics consider to be his best. The group also had increased rehearsal time with the in-house live orchestra. Despite an often hostile reception by local audiences and critics, Umanoff said, “During the three-to-five years in Belgium, the company had tremendous artistic growth. There was also a cohesion in the company.”

And then, in 1991, the company returned to New York, and all the city’s uncertainties and obstacles. Most nights, according to Leventhal, they took turns carrying their stereo equipment home from rehearsals.

The dancers no longer carry their own equipment. Instead, they have a live pianist for rehearsals and classes, and live drummers for the Afro-Caribbean movement class. Morris’ well-known love for music makes live accompaniment a necessity instead of a luxury. He offers music education programs to children and his company. You’ll even hear music from Mark Morris Dance Group’s performances if you call the center and are put on hold.

A typical day for a Mark Morris dancer, like Leventhal, is not typical for most New York City modern dancers. Leventhal takes company classes in the morning and, after a lunch break at his cubby, attends afternoon rehearsals. The luxury of having control over its own studios allows the company to be more flexible—if Morris is stuck on a phrase or having a difficult day, he has the freedom to postpone rehearsal until the next day. At night, Leventhal teaches repertory and helps run dance classes for adults with Parkinson’s disease. In preparation for the company’s anniversary, Leventhal and other dancers use the evening to re-stage Morris’ early solos and duets. They’ll be performing these works in the new performance space in March. Every detail of the building considers every need of Morris and his dancers. Most importantly, when the company is in town for half the year, they know their work environment.

“Having a space allowed us to implement many of the programs we could only dream about before,” Umanoff said. “And our education program gives the dancers an opportunity to teach and get involved in ways I don’t think they would have otherwise.” Morris has created a school in the Center that is based on his own learning experiences with varied dance forms. Leventhal added, “Dancing is a human activity for everybody. So the result of Mark’s vision is a serious school that is not elitist or competitive. It is a resource for the whole community.” That resource includes subsidized rental space for dancers based in and out of Brooklyn, classes for adults and children in everything from belly dancing to modern and, as noted, a dance program for adults with Parkinson’s disease. As Bowie said, “We’ve created a lot of fans. The students perform for us and we perform for them. This is a place that has brought people together.”

The Mark Morris who has often been seen as a divisive character in the dance community is also, at least through this building, a unifier. Regardless of its physicality, the center is beautiful because of its core ideas: an unpretentious approach to dance education and insistent respect for the company dancers and employees. The company is fortunate to call this plush dance center home. It sets an example for what dancers deserve; in a country that puts dance artists low on the list of priorities, the center puts them first. Like the Alvin Ailey American Dance Theater and the Baryshnikov Arts Center, Morris has forged the way for dance companies to take charge of space and to become more visible, helping to garner increased support and respect for the field of dance. It has also added to the cultural richness of Fort Greene, home to BAM, the BRIC studios and, eventually, the Theater for New Development. Even though the future of the Atlantic Yards and the neighborhood below it are under question, the cultural community created by the arts institutions surrounding Morris’ center will remain.

Modern dance is a tough world. There are few jobs out there, and there’s less money. For this reason, Umanoff asserted, “If talent is nurtured and developed, perhaps we can grow the field.” It begins with a space like the Mark Morris Dance Center, and the endurance of a dance company and its mission for 25 years.