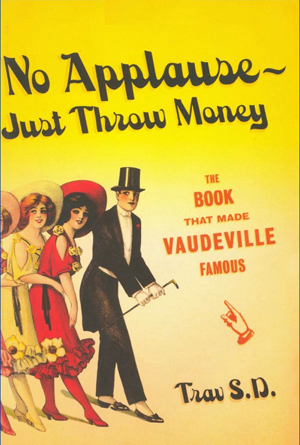 “We’re talking about the birth of show business,” Trav S.D. writes in No Applause—Just Throw Money, his vibrant and engaging history of vaudeville. Thanks to the massive changes that separate our era from its own, the word “vaudeville” is now a synonym for “stale” and “antiquated.” But this distinctively American form was as urgent and creative as any 20th-century art movement and still reverberates more than a hundred years after its heyday. It was the crucible through which the traveling circuses, medicine shows, and amateur operas of the 1800s yielded the cinema, pop music, radio, television, and celebrity culture we’ve inherited today.

Trav S.D., himself a performance artist, describes how popular theater was associated throughout history with low elements of society, even, after the advent of Christianity, with something vaguely satanic. This notion persisted into 19th-century America, where music halls and saloons attracted a rowdy, frequently violent, and almost always inebriated audience of theatergoing men. Theater owners realized that by cleaning up this entertainment just a little and offering a broad variety of professional acts they could open the experience to women, children, and an expanding middle class. In so doing, they made entertainment hugely lucrative, and they created America’s first mass audience. By the turn of the century, there were thousands of vaudeville houses across the country.

In a vaudeville performance, an audience would have watched anything from a European opera soprano to an exotic dancer to a trained dog act, hitting slapstick comedy, a magic show, a one-reel film, and a brief Shakespeare performance along the way. Each act would have been sharpened to perfection on cross-country road trips through city after city, among which a network of allied theaters and performers coalesced into a powerful national industry. Trav S.D.’s lively description of these performances makes you realize how much spontaneity has been leeched out of our entertainment by standardization. This was an era when the public was barely predictable and experimentation was key. As he notes, “Performers had to learn to alter their acts to account for local tastes…. There were no TV, movies, or radio to prepare people in the hinterlands for the more sophisticated styles of the city. In effect, vaudevillians had to lay that groundwork for themselves.”

But, as this account makes clear, it was the businessmen—the ones who streamlined the entire process, set up the theaters, decided who stayed on stage and who got the hook, and created a network for these acts—who ultimately created the template for modern popular culture. Fortunately for Trav S.D. and his narrative, these were no staid businessmen. They were archetypes of the Gilded-Age robber baron, men who, as he observes, “hid their names behind initials, then hid their bodies behind enormous desks, in front of which a summoned performer was made to stand, cowering and fidgeting while the great manager meted out rewards and punishment. With very little imagination one can envision these mustachioed blackguards tying vaudevillians to railroad tracks and sending them down conveyor belts toward whirring buzz saws.” The chief figures were B.F. Keith (who actually said, “I never trust a man I can’t buy,”) E.F. Albee, Oscar Hammerstein, and F.F. Proctor, all of whom waged a decades-long war as ruthless as any among the industrial magnates of the time. For better or worse, these men gave us the box office, and it was they who started that whole process of standardization. Many of their empires still exist in various forms. The company of a certain Mr. William Fox, for example, dealt in vaudeville before merging with the Twentieth Century Films Company.

And as that implies, the end had to come: Movies, once a small and negligible addition to the variety-show roster, soon took over vaudeville’s audience as technology and filmmakers’ narrative instincts improved. A great many vaudevillians adapted: W.C. Fields, Mae West, Charlie Chaplin, Stan Laurel, Buster Keaton, Fred Astaire and the Marx Brothers, among many others, emerged from the vaudeville stage. If the old format was superseded, its most savvy performers transformed and enriched the new art form by exploiting elements of the old, delivering attention-grabbing, perfectly honed comedy, song, and dance. As in the stage days, pleasing the crowd and filling the theater was key.

Trav S.D. notes with optimism how performers are bringing the vaudeville format back in underground venues around the country, but you have to wonder whether this is any kind of renaissance. Nothing like the broad and adaptable performances of the golden days depicted in No Applause seems likely again. And yet, after reading this account, you can’t help but see the form all over the place?in our restless need for constant entertainment, in the huge industry that produces our movies and music, and even in that flickering box in our living rooms, with its alternating slate of musical performances, dramas, comedies, and talk shows. Yes, vaudeville is dead, but we’ll be living off it for a while yet.