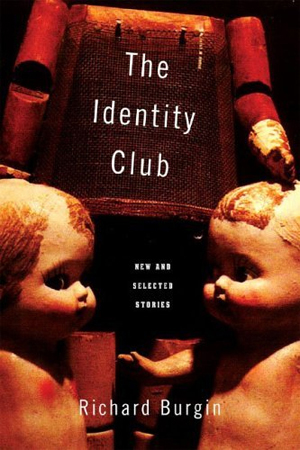 Something in the human psyche revels in the failings of others. That’s probably the appeal of Richard Burgin’s recent collection of short stories The Identity Club. This group of stories often reads more like a collection of psychological portraits than traditional stories. The characters are disturbed, alienated and yet also morbidly fascinating. For the most part, they are single men who manage to function at a basic level. They have jobs, apartments and a few interests. Although they don’t qualify as psychopaths, turbulence churns below their placid veneers.

In several of the stories (including one titled “Vacation”) the narrator is a single man on vacation. Sometimes he leaves town; other times he just lurks around, playing basketball and trying to find a woman—any woman. But whenever one of these hapless creatures finds himself in close proximity to the opposite sex, his paranoia gets the better of him. For instance, Jerry, the main character in the story “Simone,” becomes obsessed with a hooker named Simone. He’d like to be her savior, but mostly he bullies her. “He wanted to screw her and help her. Or not screw her exactly but have some form of sex where he wouldn’t feel too much anxiety afterwards because of AIDS.” At least he doesn’t shoot at her as happens in another story.

In “Notes on Mrs. Slaughter” the main character actually takes up with a woman, the aformentioned Mrs. Slaughter, but this is not much of an advance, as Mrs. Slaughter believes the Mafia is after her even though she never leaves her house. When the narrator abandons her each day to go on long perambulations around the city, she fills and empties the bathtub. He gives up the walks when he finds that someone is also after him. Sure they’re both looney as hell, but it’s hard not to admire the narrator’s acumen when he observes that Mrs. Slaughter’s vagina “looked like a miniature violin with a dull finish.”

The characters in this collection are desperate to make a connection with other people but clueless as to how to go about it. In “My Black Rachmininoff” a divorced woman seduces a piano-playing bellman named Howard and finds true disillusionment. While Burgin’s voice is not quite as effective in the female point of view; he manages to make us squirm nevertheless as she pathetically tries to ignore her own prejudice and straddle the race and class divides between her and the hapless Howard.

The title piece of the collection is one of the most complex and the most interesting. In this particular story the main character, a young man named Remy, is not obviously twisted; rather it’s the characters surrounding him who are off kilter. Remy works at an agency in New York where a secret club has formed. To get into the club you must assume the identity of a “celebrated dead artist.” Some of the resurrected include Poe, Dali, Cocteau and Bill Evans. Remy’s dilemma is which artist to choose—that is until he discovers that to take on someone’s life you must also take on the person’s death.

In spite of the existentialist hell of missed opportunities, lost chances and weird obsessions in which most of these characters live, the stories are not dreary. The last story “My Sister’s House” is especially poignant. The characters in these stories, even at their lowest moments, retain their humanity and a sense of resilience, a belief that their lives still somehow have “great truth and beauty” in them.

Burgin’s voice is as strange and compelling as they come, and though many of his stories are variations on a theme, they are never monotonous.

PAT MACENULTY is the author of four books as well as numerous short stories, essays, poems, and plays. She is also a teacher, workshop leader, writing coach and freelance editor. Her most recent book, From May to December was recently published by Serpents Tail.

The women in Ivelisse Rodriguez’s debut collection differ in age, opportunity, and background but all share one commonality: they want to believe in love. But in a culture where they are taught that to be in love, to be desired by a man, is paramount and that little else matters, it is difficult for any woman to survive. Rodriguez’s women (and one boy) are complex, well-wrought, but cannot teach us anything except perhaps how to believe in or to survive love. These nine stories present a complex, multifaceted, and somewhat connected narrative of Puerto Rican life.