There’s no question that we’ve been a destructive species. The question is more of how long, and how much longer? New evidence suggests that it may even have been late-Pleistocene man that wiped out the era’s megafauna—giant sloths, beavers, camels—rather than climate change, as was believed. The huge tracts of land left ungrazed was more prone to huge fires begun in human camps, which is in turn how we have proof of our handiwork: the charcoal traces buried in sediment. (On Earth: Winter, 2006). 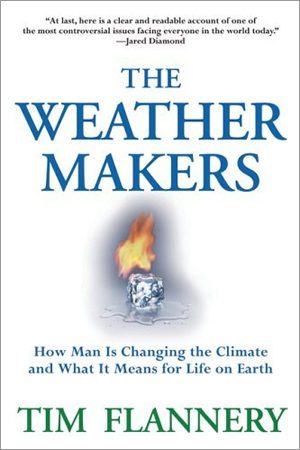 Fast forward to the century before last and John Ruskin, who sees the coal-smeared skies as a reflection of Man’s worst emotions. In the January issue of Harpers, Ando Arike points out that Ruskin’s vision, once seen as mawkish Romanticism, has more validity than ever as the climate is increasingly altered by our activities; by, one might argue, our greed and aggression. In his new book The Weathermakers (Grove), conservationist Tim Flannery sets out to show that in the future we will no longer be able to use the expression “acts of God” at all, as floods, hurricanes, tsunamis and mass species extinction will be the acts of Man alone. He creates a vast picture, synthesizing dozens of studies, of an ecosystem writ large, from methane trapped under the seabed to the plankton that live below subantarctic ice to the very stratosphere, in which every element is prone to change or destruction as the planet warms.

In example Flannery lays out the steps by which the Amazon rain forest will die. The rain forest, he argues, transpires its own positive feedback-loop of precipitation; in essence, its own weather. Once this cycle is disturbed by increased carbon dioxide levels the forest will dry up and, at best, become a scrubby desert. The vast amount of carbon dioxide contained in the soil and plants will be released, warming the climate further. And so on.

The Weathermakers focuses on a central point: the release of carbon dioxide into the atmosphere has always warmed the planet, through millions of years of geologic evidence. To argue that emissions are somehow not warming the planet is like saying that heating ice to a temperature of ninety-five degrees somehow won’t melt it. Even a politician should be able to understand this. But Flannery doesn’t merely depress us. He argues that we need to, and can, reduce carbon dioxide emissions immediately. Then he gives several examples of how each of us can begin this process.

The question that The Weathermakers really poses, in the end, is whether we will be able to work against our native impulses in our best interests, and before it’s too late; the final judgment on our species may be made sooner than we expect. I interviewed Tim Flannery by e-mail.

CN: Many of the scientists who have discovered signs of global warming in the Environment—biologists, geologists—seem to have come to the subject obliquely, through a study that pointed towards that conclusion. Please tell us how you became interested in climate change.

TF: I had known about climate change since the mid ‘80s, but had not worried about it too much. Instead I spent my time on other environmental issues such as soil degradation and biodiversity loss. But by 2001 the scientific literature had become so alarming that I decided to look into climate change in greater detail. I soon discovered that climate is the great regulator of life on Earth, and that our climate is on the cusp of changing swiftly. After that, I became obsessed to learn everything I could about the subject.

CN: I loved your vision of a world in which people control their own sources of energy instead of being at the mercy of mega-corporations. You show that many of these sources are at our disposal right now. The question becomes how to spread the word. What do you think? Do you think there is any possibility, for example, that Green Parties in America and Australia might gain momentum—before it is too late?

TF: It’s easy to forget how much progress is being made in Europe in this area. And of course energy independence should appeal to the frontier mentalities of Americans and Australians. Leading by example is also important. Our house is fully solar-powered, yet it has 2 refrigerators, a TV, computer, music, microwave, dishwasher and clothes washer. And we power our pumps for the water recycling plant, and to shift rainwater to storage tanks, with it. Ours is a relatively small system—just 24 panels—it takes up around one eighth of the roof! I do think that once people see how easy and convenient it is to become energy independent, many will follow.

CN: On a related note, one of the biggest problems in centering attention on globalwarming in the U.S. is the tepid approach of the popular media to the subject. As you discuss the Australian and American shared dislike of limitation and regulation, I guess that you have a similar situation in your country. What will need to happen to kick off a media groundswell of attention on global warming?

TF: Of course the huge disinformation campaigns mounted by the coal and aluminium industries in Australia and the US have not helped. But one of the greatest difficulties the media has in coming to terms with the issue is a lack of journalists with the time and aptitude to become knowledgeable about the vast array of technical and scientific issues involved in climate change. It took me two years to research the book, and I already had a head start through prior interest. There’s also a real lack of scientists able to talk about the issue….So, as knowledge of the issue grows, the public will demand more sophisticated reporting, and hopefully scientists will get better at imparting knowledge.

CN: How do you respond to the argument that for every negative effect of global warming, a positive effect has been brought to bear‚ by putting off an ice age and so on?

TF: Negative and positive effects do not balance each other out. The faster and larger climate change becomes, the greater the negative effects, because nothing has time to adjust. And the climate change we are on the cusp of is very swift and large scale indeed.

CN: You describe a magic gate as a moment when a switch is thrown in the environment and “conditions swiftly alter from one state to the other.” Why is 1976 considered a magic gate? Given the vastly destructive natural events of the last year or so, do you think we may have just passed another?

TF: In 1976 great changes occurred in atmospheric circulation. Rainfall declined in regions like Western Australia and subsaharan Africa, and it has never come back. It’s too early to tell whether 2005 was a magic gate year, but I somehow don’t think so, as most of the devastation we saw (through hurricanes for example) was part of a trend which began in the late 1990s.

CN: If people cannot be appealed to on the basis of environmental destruction in itself, perhaps they can be persuaded as to how it may hurt their pocketbooks. Can you lay some of these out for me?

TF: In a free marketplace (such as which now exists throughout Australia and parts of the US) the customer can make a huge difference. Just ask for a green energy option. If your provider doesn’t offer one, call another provider. It’s amazing how quickly they seem to learn when they start losing customers. In parts of the US such as New York, however, there is no energy marketplace, but a monopoly provider. It’s just like the old USSR; so that has to change before the free market can work its magic. We need more competition in the energy marketplace in the US.

CN: Suppose we don’t change our ways in time and are somehow able to adapt to a much warmer, more turbulent climate. Do you have a personal feeling about what the loss of the diversity of the natural world will do to us as a species?

TF: I don’t think that it will be possible for us to adapt. Just think of New York. Imagine the cost, in a rapidly warming world, of improving infrastructure so that the city could withstand a category 5 hurricane. Then think of the cost of defending the city from a rapidly rising ocean. And then imagine trying to cope with changes in rainfall and thus water and food supply, and of the impacts of new tropical diseases and heat stress. You soon reach a point where abandonment becomes the only option. But if we ignore that and think of nature, I’d hate to live in a world impoverished by climate change. To lose 7 out of every 10 species on earth would make our planet unrelievedly boring.

CN: When I spoke to the publicist at Grove he said that you were “out in the bush.” What are you doing there? What are you pursuing at the moment?

TF: I’m taking a break in a cottage around 25 miles from the centre of Sydney. It’s quiet here because the place is miles from the road and accessible only by boat. This has been a very busy year for me, and I’m following the Australian tradition of taking a 4-6 weeks summer holiday between mid-late December and Australia Day on January 28. I’m exploring the surrounding national park, doing a bit of house maintenance, and listening to the lyrebird. And catching mud-crabs. They’re delicious. I got a five-pounder a couple of days ago.