Kate Braverman is an experimental poet, short fiction writer, essayist and author of four novels, whose short fiction has been widely anthologized. Subversive, surreal, insightful and discerningly witty, Braverman never ceases to surprise. Her memoir, Frantic Transmissions to and from Los Angeles: An Accidental Memoir, recently received the Graywolf Prize for Nonfiction. 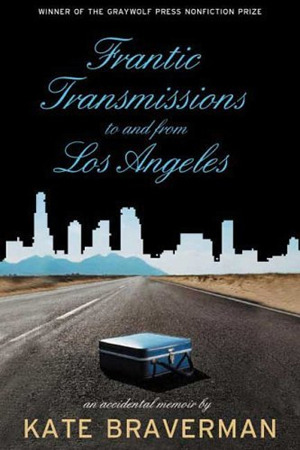 Lisa Kunik: Kate, your fictional protagonists could be read as thinly disguised autobiography. From where do your novels begin?

Kate Braverman: All of my writing is autobiographical because I start with something that excites or terrifies me. I crave extremes. I do some, and the page does some. It’s a dynamic. That’s why it’s absurd to talk about if something is autobiographical. By the time technique comes into play, by the time you’ve engaged in the technical process, the “true story” becomes a fiction of its own.

Lithium For Medea, my first novel, was written after I’d been writing poetry exclusively for six years. As a “plot” I chose fifteen poems written in the same voice about the same situation. Then I constructed a narrative by writing between the poems, the spine, the anatomy of the book. A poem became a chapter. All the characters in that book are some composite version of myself as I exist to serve the page, but I reject traditional plot. It seems obsolete. A line can be in a poem or become a part of a short story or novel. It’s the language, the words, the rhythm, the cadence, the ambiguities and the resonances that interest me. I don’t write. I compose as a musician does.

Rail: The sensorial experience of your prose points to poetry. Are fiction and poetry exclusive of one another?

Braverman: Gore Vidal said there is no poetry in America, only carefully deformed prose. I deform my poetry to give the appearance of being larger fictions. I have sat in rooms with poets of fantastic reputation. With my eyes closed, I could not distinguish it as poetry, but rather as wonderful experimental writing. If I didn’t actually see it arranged as stanzas, I would consider it excellent prose. They’re not exclusive for me, but fuel one another.

The epiphanies of the Beats were prose. My favorite novels have the intensity of poetry. Under the Volcano by Malcolm Lowry and The Sheltering Sky, by Paul Bowles, say, could have been cut up into books of poems.

In Frantic Transmissions I have actual history, chapters that are entirely poems strung together, stand-up comedy routines and complete fictions. That it’s called nonfiction is just a label. It’s an experimental poem. It’s the fabric of alchemy, not whether it’s a dress or a shawl, a hat or gloves.

Rail: There is a signature incantatory style to your prose. Did this style grow out of the poetry readings you gave in the early seventies at the Venice Poetry Workshop?

Braverman: As a poet, you speak the words to an audience. I write out loud. I speak every line. Every writer should write for the ear, rather than the eye. The words on the page lead naturally to the next idea, the next association. If you write for the ear, one sound leads to another, and an entire substrata of possibilities opens. The page is 3-dimensional. It can offer sounds as well as paint pictures. In an image-obsessed era, I don’t let my students “see” anything. I make them describe the world by smell, sound, taste, texture and the interior monologue. The page is a region where one engages in what can’t be done by cinema, rather than a repetition of what one already knows. Of course, the marketplace only permits focus-group vetted versions of experience.

Rail: In an interview you once conducted with William T. Vollman, you commented that the demands of the marketplace have not allowed fiction to follow the revolutionary experimentation of Joyce because the reader demands a recognizable story. Does your refusal to adhere to a conventional understanding of narrative limit your audience?

Braverman: My readers are primarily MFA students. My short fictions are in most university anthologies. My audience has been limited because of my failure to understand the marketplace, which used to follow rather then dictate. I am responsible for the lack of audience I have. The neo-Romanticism of the sixties and isolation of Los Angeles combined with a pathological inability to engage the Establishment on its terms was a major problem. I was told in 1988, when Palm Latitudes was published, that I needed to find someone like Didion or Janet Malcolm or Sontag, say, to explain why my work mattered, to frame it, make it intelligible to the many. If anyone had done that, bothered to do it, say, in the New York Times Book Review, the reader would have been introduced to me as they are to complex, typically male and foreign writers. I continued to think I could create an origami so exquisite, it would filter through. I was wrong.

Rail: How does this affect the way you mentor your graduate students? Are not most graduate students going to grad school to better their chances at publication? Should their writing be marketable? Or innovative? Can it be both?

Braverman: I’ve been a Professor of Creative Writing, and I’ve taught privately for most of my writing life. I have witnessed MFA programs mushroom from a possibility to a necessity. When entering an MFA program, it’s important to recognize that MFA programs are now an industry. That’s how most writers earn a living, teaching students, not from the sale of their own books. I tell my students to be careful about what they learn. One can be enhanced by such programs, and one can be crippled by them. At the current rate of literary disintegration combined with the phenomenal number of MFA’s being produced, an MFA is no longer a guarantee of publishing success. The more important question is why one is entering the writing life in the first place. If writing is not the only way to maintain your sanity, if it isn’t a matter of life or death, don’t bother. I would rather have ten thousand real readers a year graduate from programs. Reading real books that require a dictionary and weeks of intellectual struggle are a vanishing species. More people write then read. In another generation, real readers will be rare as Coptic scholars.

Rail: The pursuit of writing is a lone journey yet enrollment is at all time highs in writing workshops and MFA programs across the country. Does writing require community?

Kate: The concept of community seems appealing, but it tends to be short-lived and often divisive. Communities contain within them clicks and camps, and after graduation, usually dispersion. The Venice Poetry Workshop was a sort of community, the closest experience I’ve had to an MFA program, but there were divisions, always. There’s a collective aspiration for a vision and when critical mass is achieved, the “wars” traditionally begin. I’ve found community more conceptual than actual and in the long term, one must sustain one’s self by one’s self.

Rail: Ironically, even though New York politically and culturally sets itself apart from the rest of the nation, it also serves as the collective literary voice. As a regional writer, specifically of Los Angeles, a region you see as marginalized, can your work transcend the way New York writing does?

Braverman: Historically, there are junctures of creativity, once Athens or Paris, Venice or Constantinople. In global post-historical times, the time I live in, I’ve been thinking about a critical apparatus to serve the fluidity and pace of this age. I live in San Francisco and have for four years now. San Francisco is a city built on ideas, artistic and scientific, new technologies and innovation. San Francisco is like a port where a certain sensibility moors, anchors for a bit and then sails again. This century will be more about such ports, rather than traditional cities. With the decline of print and the rise of the net, the power of New York will naturally diminish.

Rail: In your latest book, Frantic Transmissions, how did you transcend the limitations of the nonfiction genre?

Braverman: Creative nonfiction is a newly opening region. I thought there should be game to hunt there. Since Mailer, Capote and Hunter S. Thompson reinvented nonfiction, saving it from moribund irrelevance, since they destroyed the crumbling barriers between short story and journalism, they made possible the memoirs now being published. I see nonfiction as unlimited, actually. When I read Best American Essays, for example, I couldn’t distinguish between an “essay” and a “short story.” Since Frantic Transmissions is impressionist history, pure poetry, imaginary Q & A’s with dead people, stand-up comedy monologues and landscape epiphanies, the genre seems vulnerable to attack. Barricades are not strictly guarded yet. I’ve been a guerilla fighter so long. I’m permanently locked and loaded.

Lisa Kunik is a writer based in New York City.

Wonder—as in a rapt attention or astonishment at something awesomely mysterious—is a vital response to fairy tales across cultures, old and new. In their debut collection The Anchored World: Flash Fairy Tales and Folklore, author Jasmine Sawers filters Western and Thai tales through their unique sensibility, yielding a curious and curiosity-evoking book with something to wonder at for every reader.

A palpable feeling of suspense suffuses the space of Kate Millett’s Terminal Piece (1972). 46 wooden chairs are installed in two long rows behind a parallel series of vertical wooden bars that span the length of the gallery. The lighting is dramatic, with seven light bulbs suspended from the ceiling illuminating the space within the cage-like structure, while the territory of the viewer remains dimmed.

The feeling of having a word on the tip of your tongue—a state between knowing and not-knowing, remembering and forgetting—takes visual form in the paintings that make up Kate McQuillen’s exhibition Wave Amnesia.

A comics memoir, workplace drama, and, most fundamentally, a migration and generation story that’s specific to the Canadian provinces. Dilating and expanding moments of time, it subtly encompasses the quiet and unassuming tragedies that mark our present moment.