H1. Marshall Berman, On the Town: One Hundred Years of Spectacle in Times Square (Random House, 2006) 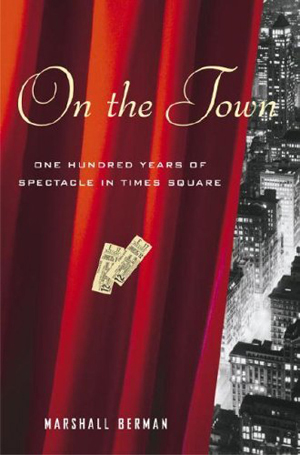 Honestly, I rarely visit Times Square. Just trying to get past the maddening crowd—slow-moving tourists, screaming TRL fans, and beefy dudes heading to the ESPN Zone—can be a trying experience. Nevertheless, I kept an open mind while reading professor Marshall Berman’s On the Town, a whimsical, idiosyncratic history of Times Square. And it paid off.

It might be assumed that Berman—a Marxist humanist who penned the seminal work All That Is Solid Melts into Air—would want to sound off against corporations like Disney and Viacom for invading Times Square. But, there’s a lot more to the story than the Giuliani-enforced clean-up efforts in recent years, and, thankfully, this terse book is far from a knee-jerk critique. In fact, it’s more like a celebration.

In the preface, Berman states that his objective is “to empower people to think critically while we bask in baths of white light.” In other words, feel free to drop references to Marshall McLuhan or Guy Debord in scrutinizing mass culture, but don’t neglect the human element in this century-old spectacle. Family plays a pivotal role for the Bronx-raised author, and he sprinkles the text with personal anecdotes from childhood. He also travels through the arts and popular culture of the last century—from Theodore Dreiser’s Sister Carrie to Sex and the City’s Carrie Bradshaw.

In 1905, as the New York Times corporate headquarters rose over 42nd Street, Longacre Square became Times Square. Soon, laws governing outside advertising and zoning were tweaked and “nearly overnight, a new generation of huge, bright, kinetic signs came to life.” When the free-swinging cabarets opened for business, the morality brigade arrived with plans to straighten up the whole decadent scene. (Sound familiar?) For Berman, sexuality has played a key role in the history of Times Square, and any attempt to sanitize the area is a mistake. After all, a passionate kiss produced the most iconic image of the square’s history—the one between a sailor and a woman on V-J Day.

Of course, Broadway takes center stage through much of the narrative, with shows such as On the Town—a musical often regarded as “the first integrated show”—discussed at great length. It’s no surprise that the book’s title takes its name from this production: Berman is determined to depict Times Square as a melting pot. But he doesn’t ignore the area’s reputation for seediness and danger, either: “By the late 1960s, the ironic contrast between the high lights and low life had become the typical way of seeing the square.” When Berman himself was teaching at CUNY’s graduate center in the late ’70s, he walked his female students to the subway or Port Authority after dark.

However, what some critics find slightly more sinister is the influx of corporations in Times Square since the 1990s. These days, fashionable writers are more likely to be munching on sprouts in the Frank Gehry-designed cafeteria in the Condé Nast Building than eating a pastrami sandwich in the automat. While not a huge fan of the overhaul, Berman is also put off by the pessimism evident in attacks against the sprucing up—or Disneyfication—of Times Square. “The old spectacles are gone,” he writes, “but the people on the street look like they have the life and energy to create new ones.” In the end, Berman finds himself harassed on the street by a security guard outside Reuters headquarters. While he was standing on the sidewalk thinking about signs and signifiers, he was also loitering.

On the Town is not a straightforward history by any stretch; the New Year’s Eve ball drop, for one, is noticeably absent. In addition, sections deconstructing race in The Jazz Singer or analyzing Laura Mulvey’s famous “male gaze” essay are sure to conjure up memories of undergraduate liberal-arts classes. Yet, despite a few glowing references to the Popular Front, the book is not overly political. And Berman bravely fights against the curmudgeonly instinct that often arises when discussing the good ol’ days. “I was doing something I have criticized many other people from doing with Times Square: using nostalgia to suck life out of the present.” Perhaps I’ll have to take another look at it for myself.

Michael Calderone is a writer based in Brooklyn.

Jayson Musson: His History of Art

In the second video of three in Jayson Musson: His History of Art at The Fabric Workshop and Museum (FWM), a russet-colored-corduroy-suited, yellow turtle-necked, and well-meaning but supercilious art collector “Jay,” aka Jayson Musson, gently explains to his roommate, a pot-smoking hare, Ollie: “Art history isn’t that complicated. Whatever man fucks it kills and whatever it kills it fucks.”