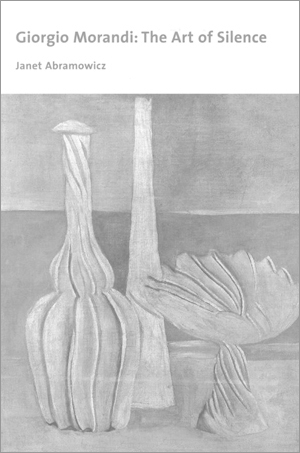 In the 20th century pantheon of modernist European painters, Giorgio Morandi’s image of formal purity, and his reputation of personal asceticism has been second to none, except, perhaps, for Alberto Giacometti. But while the latter’s life and work has been documented, analyzed and considered in the most intimate of personal and social detail, Morandi’s life and career has managed to escape the kind of scrutiny that has become de rigueur in art history studies. In Giorgio Morandi: The Art of Silence, artist and writer Janet Abramowicz attempts to dismantle the ivory tower that Morandi has been placed in by giving a broad and detailed account of his career in the context of 20th century Italian culture and politics.

Abramowicz, Morandi’s teaching assistant turned life-long friend, weaves a narrative that is from a socio-political viewpoint, probably one of the most extensive to ever be published about the artist in monograph form. While it is a welcome addition to Morandi scholarship, the book falls short of any groundbreaking revelations that would actually shed new light on, or fundamentally alter our perception of this painter’s life and work.

Abramowicz presents a wealth of information, much of which would probably interest only a specialist in the history of Italian art and literature. The reader is inundated with lists of dates and names that prove redundant, and create a screen through which Morandi’s own personality remains distant and obscure. While the text occasionally offers a revealing personal anecdote, it falls short on psychological and artistic revelations. Abramowicz attempts to interpret Morandi’s oeuvre within an historical perspective and at times her observations seem literal and far-fetched. At other times, sensitivity to development and detail within the work is illuminating, and the wealth of reproductions forms a vibrant counterpoint to the narrative.

The overall sense is that the writer, while uncovering and documenting information that hitherto has been ignored if not altogether suppressed, is still tremendously under the personal spell of her subject, and remains loyal to the unobtrusive vantage point that the artist’s family and previous writers have maintained. Indeed, one cannot help but wonder if the Morandi myth was created to hide or obscure personal details or issues that may have proved more explosive and interesting than his Fascist connections. Placing Morandi within an historical context that documents these connections opens the door for considerations of such a broad nature, that perhaps it would be too much to expect the writer to undertake, when her purpose was simply to position Morandi within a more precise intricate social fabric. But it is precisely this repositioning that demands a broader consideration not only of this artist’s, but of any artist’s relationship to their political times i.e. the meeting point of artistic and creative endeavors and the political context within which they were undertaken, the question of how those relationships influenced the work, and finally, to consider the way our reading and experience of the work is influenced by that information and by our own historical/political identifications and beliefs. .
Beginning in his lifetime, Morandi’s art engendered countless studies of his life and artistic practice. Abramowicz documents how the artist was aware of these publications, and manipulated his image in the press, and was controlling in his relationship with collectors, galleries and dealers. While his work has inspired some of the most clichéd modernist reveries, and understandably supplied little in the way of a non-formalist interpretation, even in the historical chronologies, his association with the Fascists (and particularly the Strapaese movement) and his later arrest by the authorities as a partisan enabler, have been avoided. Nonetheless, the cultural climate and policies during the Italian Fascist regime and its relationship to the arts and culture have been studied and published in the academic world (notably in English by Emily Braun and in Italian by various scholars) though Morandi’s own relationship to this regime and a consideration of his work within this context has escaped popular exposure. No doubt,

the consistent, narrow and repetitive subject matter of his work does not naturally inspire a voyeuristic burrowing into his life nor does it afford a literal historicist analysis of it. The austere formal purity of the paintings belong in the realm of aesthetics—at a remove from “politically significant” work, like that of Sironi, Morandi’s contemporary.

Influenced by the writers own predispositions, The Art of Silence seems to pick and choose where, when, and how deeply it will delve. Identifying the effect of WWII on Morandi’s art, should similarly raise considerations of the effects of any other time and place on the work, particularly the impact and influence of Fascist politics. The gentlemanly hermit image is constantly contradicted by calculating and worldly actions, yet any mention of romantic or sexual liaisons remain untouched. While there are interesting observations about Morandi’s influence on later generations (avoiding the obvious mention of Guston) and eloquent descriptions of the process of arrangement and re-arrangement in the work, the overall guiding assessment and methodology seems amiss. In the end, one is left wondering: Is the information revealed and documented of a nature or a magnitude that can alter or make us significantly re-evaluate Morandi’s work? What is the association correlative component in our interpretation of things that are by their nature not necessarily political? To what extent do our speculative assumptions on the behavior of the artist color our interpretation of the work? Obviously this book does not set out to ask nor answer these questions.

For the lover of Morandi’s work, Abramowicz’s book is a pleasurable if at times exasperating experience. To anyone who naively thought that a life led through the first half of the 20th century in Italy would be devoid of contact with the Fascist regime, this book will be a revelation. Anyone who imagined that Morandi lived a life of monastic isolation, with no contact with other artists, dealers and cultural personalities, will be surprised. Anyone expecting Proustian revelations as to his strange living arrangement with his sisters will be disappointed. I doubt that the fact that Mussolini owned two of his paintings will inspire us to see his bottles in a new light, nor will his later arrest as a partisan sympathizer be needed to rehabilitate his reputation. Morandi is not the first or last artist who continued focusing on his work while history rampaged around him.

The Silence takes readers into a typeface that interfaces powerfully with the luminous prose of one of America’s most innovative and visionary writers.

In a 2007 essay, Chris P. Miller asserts that “silence is a chronology, a beginning collapsed into the end.” For Miller, silence manifests as the first—and truest—form of compression, a charged and dense rhetorical space in which even time folds in on itself. Susan Sontag describes this remarkable compression not as a destructive force, but rather, as transcendence, a sure sign of language sublimating into dream, insight, and artistic vision. Approached with these ideas in mind, the gaps between words, lines, stanzas, and prose paragraphs becomes charged with possibility, a liminal space in which the rules governing speech no longer hold.