Sigrid Nunez, The Last of Her Kind (Farrar, Straus and Giroux, 2005) 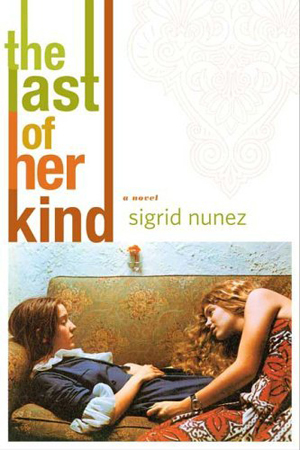 Today, the 1970s sometimes seem as distant and inscrutable as the Middle Ages. Pop culture may have embraced the style, lingo and music of the ’70s, but we often pass over (or more likely, have forgotten, or fail to understand) the ideas and philosophies that were at the heart of the era. In her sparkling new novel, The Last of Her Kind, Sigrid Nunez illuminates that complicated time by introducing us to several characters who, years after the Vietnam War has ended, the Weathermen have come clean, and Patty Hearst has become a socialite mom, are still a product of that age.

Nunez writes from the perspective of Georgette George, a middle-aged woman piecing together the stories of her life, starting with her freshman year at Barnard in 1968. Georgette grew up in a poor, dismal upstate town with an abusive single mother and several soon-to-be-wayward siblings. At Barnard, she doesn’t know what to make of her roommate, Ann Drayton, a rich, privileged, yet painfully idealistic girl from Connecticut who dropped her given name of Dooley because it belonged to her “slaveholding” ancestors, and who had requested to be paired up with someone from a world “as different as possible” from her own. Ann is a whirlwind of energy whose manic zeal irritates her classmates, but her commitment to the plight of those less fortunate than her (which of course, includes Georgette) eventually wins over her roommate, and the two become close friends and confidants.

After their sophomore year, both girls end up dropping out of Barnard. They have a terrible falling-out in which Ann accuses Georgette of being stupid, dispassionate and utterly “unteachable,” and their lives veer off in radically different directions. Georgette’s path takes her on a hunt for her druggie runaway sister and involves several failed romances, a relatively glamorous career in publishing, and a family. Ann’s path suddenly dead-ends with a shocking crime and a life sentence in prison.

Nunez intercuts Georgette’s first-hand account with long, probing looks into the lives of other characters. We listen in as Georgette’s damaged baby sister, Solange, shares stories about hitchhiking across the country with a band of blissed-out hippies and developing a dangerous obsession with Mick Jagger—the start of her descent into madness. We hear how the media treated Ann’s trial, and then get to know her through the eyes of her parents, teachers and even her fellow prison inmates. As expected, racial tensions flicker like daggers in all of the characters’ lives, and occasionally draw blood, but it is Nunez’s description of class struggles that give depth and texture to this story.

Social class is each woman’s harikiri knife. Ann’s self-loathing and her embarrassment at having grown up rich (they even had servants!) are exacerbated by the revolutionary spirit of the times. Georgette and Solange are so desperate to run away from their miserable home life that they don’t care where they end up. None of the women can escape the past that they were born into, and the way they deal with it determines their individual fates.

Georgette is the eyes, brains and mouth behind the book, but Ann is the story’s beating, bleeding heart. It is a testament to Nunez’s skill with character development that while we understand Ann’s motives, background and psyche—perhaps better than we do our own—we never really like her. Even during her lowest moments, we feel like giving her a good smack in the head. Her charge-ahead nature and impossible ideals will eventually become her undoing, but she still commands our respect.

The novel is intensely focused on the inner lives of the characters, but because we are learning about the past from an older and presumably wiser Georgette (who is so nuanced and realistic, it’s tempting to believe she’s Nunez herself), we also get a wonderful panoramic of the landscape of the times. Nunez does such a good job of decoding and explaining the ’70s that this book should be taught in high-school classrooms.

As a parable of the destructive powers of idealism, The Last of Her Kind will undoubtedly speak to anyone who lived through the ’70s. But unlike the art that deals superficially or smugly with that era, it will also speak to the generations that follow.

Corrie Pikul is a writer based in Brooklyn.