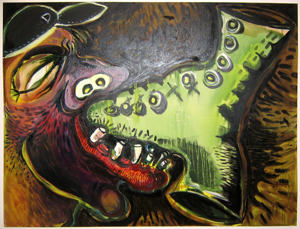 As a long time member, both as an artist and gallerist of the Provincetown and Chelsea art scenes, “Bloopers, Gaffs and Other Rough Patches” is Lawrence’s New York debut exhibition. Relaying on personal experiences gleaned from observing the singles scene, he specializes in the depiction of uncomfortable social or personal happenstances that are rendered in a brusque and aggressive materiality and facture that seems as abrasive as their motivations. Lawrence appears to have captured the churlish attention viewers might have when, seeing a drunken hissy fit between rumpled lovers, they are nevertheless unable to look away, worried they might miss some unmentionable act, or at the least, the opportunity for a favorable self comparison. Profiles of scrappy looking heads, some chewing on shoes, guzzling booze, or eating cell phones are rendered with a ham-fisted neo-cubistic bravado that is at once repulsive and yet comically endearing. Color is sometimes dark and turgid and at other times light and vaporous.

In “Girlfriend Experience” (1999-2002), a one eyed female figure pours fluid from a pitcher into a fish bowl planted on a male torso’s shoulders, a swimming fish replacing the boyfriend’s head. A clear jell of viscous resin pools over slabs of collaged paper and fabric; clumps and blobs of modeling paste give an altogether synthetic unpleasantness to the general texture of the painting. Shapes are inscribed with a meandering line that zips along contours, dribbles at turns and pauses to intensely pattern areas with hippy paisley. This line is akin to Pollock’s, as it sits on top of the picture plane like chocolate syrup. Echoes of Picasso’s late cloisonné cubism are mingled with a kind of late 50’s commercial cartoon imagery that one might see advertising cheap bourbon in Argosy Magazine.

I’d recently visited an exhibition of works by Byron Brown, a founding member of New York’s first generation of modernists. With their use of Picassoesque pastiche, a self-dramatizing use of artistic flourishes and an odd naïve humor that seems more an affectation that a true stylistic insight, there’s a parallel sensibility in their extravagantly misguided version of Modernism. In Brown’s case it lead to tragic consequences, a fall from artistic stardom, and an early grave. For Lawrence, it leads to a chuckle of guilty recognition and a jolting reassessment of our standards of “good taste.”

Because of his innate understanding of pictorial syntax and cliché, derived from close readings of sources as diverse as early Modernism, classic commix and Abstract Expressionism, Lawrence hasn’t limited himself to figuration but has decided to test the efficacy of his language by also delving into a type of surrealistic abstraction. In recent works the line has thickened and an increased painterliness has developed. His bio-morphic shapes nevertheless have a similar klutzy insolence and goofy brashness displayed by his desperate figures. “Bloopers” (2005), is a grouping of small abstract paintings that could be a parody of those very serious canvases seen as props in B grade short features about life in Greenwich Village from the Beat era. Ameoba forms dance and undulate as if in preparation for cellular division. A ground of modeling paste is puddled and sculpted into ribbed textures, then painted and glazed over to enhance the appearance of substance. A palette of ochre, black and white is combined with a gaseous yellow and spots of red and blue. Strangely these little “bloopers” seem to manifest a wide spectrum of emotions like: anxiety, pictured by repeated nervous tick lines, stress depicted with squirting drops of cartoon sweet, or pride and joy related with broad brushed beams of radiance. Though they recall the biomorphic designs of Baziotes and Miro, with the added connotation of comic self-consciousness received no doubt through self-actualization therapy, their clunky fabrication is totally contemporary.

Lawrence Weiner’s concept of language as sculpture—in his words “language + the materials referred to”—began to take shape in the late 1960s. Ultimately, his approach to sculpture would reveal an entirely new concept of art-making. The use of language, often painted directly on the wall, became his primary visual medium.