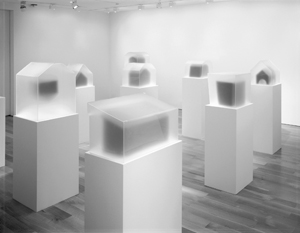 Maria Elena González was born a Catholic in Cuba two years before the revolution. By the time she was five, Castro had closed the churches and “Catholicism became little more than a residual consciousness,” according to Eleanor Heartney’s insightful catalogue essay for Internal DupliCity, González’s recent sculptural installation at Knoedler & Company. But when the artist won the Rome Prize in 2003 “and spent eleven months at the American Academy in that city … her childhood faith reasserted its hold on her imagination.”

What especially fascinated González were relics and reliquaries—actual bits of a saint’s body or possessions and the jewel-encrusted vessels that contain them. While this particularly Catholic form of veneration might strike an outsider as macabre, it is in fact the embodiment of a unique, body-centric metaphysics. As Heartney reminds us, “For medieval Christians the body served as the physical dwelling place for the soul. This was a counterpart to the fact that the reliquary housed the relic and the physical structure of the church housed the spiritual community of believers. Thus, in the Catholic imagination, matter becomes both the dwelling place and the physical expression of ineffable spirit.”

How much the idea of reliquaries per se influences González’s installation is open to question. She hardly attempts to mimic their dazzling surfaces, employing wood, paint and plastic in the place of hand-tooled gold, crystal or sapphires. While a series of related works on paper directly address sainthood and martyrdom—images of St. Catherine’s wheel derived from Michelangelo’s Last Judgment, along with St. Lawrence’s grill and the marble slab (drilled with holes to drain the blood) where his body was laid—those references disappear from Internal DupliCity.

What we see instead is a set of nine architecturally schematic components, roughly shoulder-high, laid out in a grid. Each unit is composed of a white pedestal, a stripped-down architectural model painted a deep, rusty red, and a frosted Plexiglas outer shell that simultaneously echoes the model’s shape and obscures it from view. González’s abstracted building types evoke a range of associations, from a Renaissance villa to an agrarian shed to a Roman burial vault. The transcendental qualities ascribed to translucence endow the installation with the calm, muted aura of an ideal city, hermetic and remote, a Plexiglas vision of paradise. González may be playing with the idea that reliquaries were often designed in the form of miniature cathedrals or basilicas, but her simplified forms instead suggest children’s toys or dollhouses, an inference leading back to the artist’s recurrent themes of home and family, memory and loss.

If González’s attraction to reliquaries unearthed her buried memories of Catholicism, it could be that their conflation of visual splendor with the rot of death spoke directly to the presumably awed, mystified and probably frightened little girl attending pre-Vatican II Mass with her family in Aguacate, Cuba, her lost home. The sensual richness of gold and incense, silk brocade and flickering candles would have been dominated by an effigy of Jesus nailed in agony to the cross, streams of red blood flowing from his head, hands, feet and side: unfathomable impressions locked in her memory, never to be developed or challenged thanks to Castro’s anticlerical decree.

It’s just this sense of irreconcilability that makes González’s installation so strangely moving. All is not well in this ideal city. Inside the largest Plexiglas shell, a peak-roofed house hangs upside-down. In another, the four sides of another peak-roofed model are cut out in the shape of Roman arches. The four open sides recall a train depot or gatehouse, full of comings and goings, but the preparatory drawings for this object, tellingly called “Mi Casa,” reveal that the arches are based on abstracted silhouettes of St. Catherine’s wheel. An image of the acute pain of exile? Perhaps. González is never explicit, allowing for multiple and potentially contradictory interpretations to filter into her work.

Take the punning title of the installation, Internal DupliCity. Does the highlighting of the word “city” acknowledge the architectural nature of the project? Is the prefix “dupli” a reference to the components’ duplication of forms, one inner and one outer? Or does the title, taken at face value, connote trickery or self-deception? Possibly all of the above, or maybe none. But I think that the key to the work lies in the particular visual qualities of the materials she’s chosen. A paradox inherent in translucency is that whatever is visible beneath the surface grows less distinct the closer you get. The same phenomenon happens with early childhood memories, especially the preverbal. The more you chase them, the cloudier and more open to imaginative interpolation they become. Yet they remain the irretrievable and unknowable kernel of our adult lives, the engine of our growth and the sinkhole of our failures—stealthy, hidden and duplicitous.