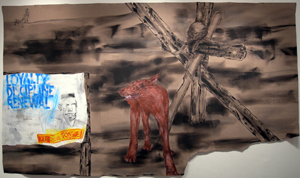 “History is a nightmare from which I am trying to awake.”
—James Joyce

In the dwindling years of the Eisenhower era, painter Leon Golub undertook a series of large scale works which sought to encapsulate mankind’s panhistoric conflict within a singular metaphor: the male body under ‘duress.’ Possessing, in the words of Peter Selz, “a deep concern with the human image,” these works sought to infuse exterior content into an art scene then dominated by the hermetic credos of Greenbergian formalism. The exhibit currently on view at Feldman Gallery (“We Love Our Leader”) presents several masterpieces from the artist’s early period juxtaposed against the mordant, apocalyptic paint collages of his later work. For Leon Golub, who passed away in August of 2004, history was indeed a nightmare—one in which he possessed an imperturbably waking conscience.

By the close of the Vietnam War, Golub had entered what Jon Bird refers to as his “televisual period,” and was focusing on a large body of portraits depicting, with a traitorousness bested only by Bacon’s “Pope Innocent X,” the dons of the 20th Century. “Head XXXII,” from 1959 (on view at Feldman), is the mold from which these later works emerged: an inside-out version of the Greco-Roman bust incongruous with its ancient prototypes’ connate exaltation of human reason. Picture the bust of Caesar, absolved of its distinguishing features, seared by the weathering ages, by a torrent of post-industrial rain; its would-be transhistorical beauty replaced only by the raw will to persevere.

Such entropic neo-classicism prevails in “Gigantomachy II” (1966), the touchstone work of the Feldman show. Drawing on the Greek myth, Golub depicts a group of larger-than-life adversaries engaged in a desperate struggle of self-annihilation. Disrobed in the Hellenistic tradition, these fibrous able-bodies are crudely articulated by Golub’s multi-gait brushstrokes, a “barbaric realism” set not within a rigidly defined historical context, but within the grand tableaux of eternal human conflict. The power struggles investigated in later works prevail, but the perpetrators here are indistinguishable from their victims. On the right side of the work, one trembling combatant presses his hands against the back of another, urging his accomplice on in an act of violence neither know how or why to commit. In the center of the twenty-some foot canvas, another soldier stares off into a distant horizon, gesticulating onward with his outstretched arm. We have happened upon the sole voice of confidence amid the mayhem: a Herculean permutation of the hapless “Leader” suggested by the show’s title, here staking his manifest destiny on the children of Ge.

On the adjacent wall, this sublimated barbaric gesture is echoed by the crouching figure in “Napalm I” (1969). To the left flails a horribly injured man, and while the composition suggests a causal relationship between the two soldiers, it is unclear whether the massive destruction visited upon the fallen man’s torso has been delivered (perhaps metaphorically) by his comrade’s outstretched arm, or by some unseen force. Harold Rosenberg spoke of the essentiality of the artist’s brushstroke as a performative “act.” Here, the dynamism of the figures, and the quickness of Golub’s gestures suggest that the paintbrush (like the human body) may be used as a weapon. These are works in which the indexical trace of the active painter is perfectly synthesized with the painted actant. The result is a testament to the twofold corporeal power of Golub’s expressive figuration. Interestingly, the first modern contextualizing element—“Napalm”—in what will become a veritable pastiche of referential signs as Golub moves into the televisual terrain of his mid period work appears entirely external to the painting itself. Golub is still clinging here to a universal aesthetic, one which will not be cast off until he bids his actors to try on the contextualizing garment of the Army fatigue, thus literalizing the metaphorical correspondences of the Gigantomachy series—bringing it all back home.

Entering the back room at Feldman gallery requires traversing a space of more than thirty years. Suddenly gone are the larger-than-life Gigantes of the early work. In their stead are a series of paint-collages that predict with haunting accuracy the abuse and subjugation of state-sponsored torture programs like that at Abu Grhaib. Photography has become the direct source material for these works. The text, which was formerly relegated to the title cards, has entered into the paintings themselves: ominous imperatives, culled from the lips of our bloodiest century’s dictators, boldly redirected upon the perpetrators of abuse, and often upon the viewer himself. It is as though the artist has given up on the subversive-sympathetic approach and taken to spelling it out for us in italics.

The show’s title work from 2003 lays bare the horrific aftereffects of the blind faith implied by its dumbly amative slogan—blind faith in the coursing Gigantes of thirty years prior as a symbol of human progress. In this pastiche of sadism, loosely drawn stickmen are roped and lynched, their heads smashed in by the rifle-wielding pawns of some greater totalitarian machine. Each willing executioner is clad in state bureaucratic attire, while a stray dog (read: Nietzsche’s name for his pain; the yelpers in W.H. Auden’s “nightmare of the dark”; or is it a single-headed version of Cerberus himself?) lingers below. Scratching at the limits of confrontational art, these paintings preemptively assume the passive adoration of our country’s citizenry, then lump the full weight of the resultant atrocities upon them/us. The viewer has two choices: recognize his own complicity and consider ways to amend it, or look away.

To Golub’s credit, he seems to have a keen awareness that many may do just that. In “Bite Your Tongue” (2001) we are given a campaign banner in the guise of a peace flag. “Loyalty, Discipline, Renewal” states the slogan above an updated “speak no evil” character who looks out on a post-apocalyptic moor that has been left to scavengers. One cannot ignore the overriding cynicism. In more personal late-period contemplations, Golub employs a trenchant “gallows humor” so as to deflect the works’ unflinchingly negative tone. Here we have only his mastery of figure/ground relations, his compositional infallibility, and, to reference Richard Wollheim, un-refined “psycho-motor” expressivity to shield us from the portents conveyed. In the 1970s, Golub incorporated the image of the shield into his work as a symbol for some of the very principles he ironically sloganizes above. Now we are given the reverse side: the Aegean reflection of Medusa’s petrifying imago; and we cannot help but stand dumbstruck, like the ‘tongue-biting’ figure in the painting, as we gaze through one squinting eye at the world we have created.

DAVID MARCUS was the much-loved editor of numerous anthologies of Irish fiction and poetry.