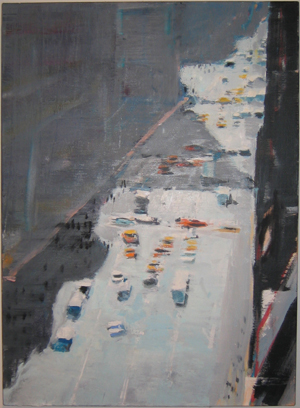 Mini glaciers of frozen snow still dotted the side streets of Midtown, remnants of the record-breaking snowstorm of ‘06. As the elevator door opened on David Kapp’s selection of recent cityscapes, I was convinced that if the radiant heat generated by these works could be harnessed, it would’ve melted the last remains of winter.

Beginning with the influence of Carot and continuing through the works of Manet, Monet and Pissarro a range of pearly and silvery greys used by these Impressionists has come to typify a quality of the Parisian atmosphere. Likewise, Diebenkorn’s “Ocean Park” series with its subtle aquas, greens and golds has come to stand in for the light and space of the Southern Californian landscape. Kapp has with these works distilled an ambient quality that resounds uniquely to New York, especially summertime New York. “Summer in the City” isn’t just the name of a song, it paradoxically combines aspects that Kapp uses to create his strong abstract statements in the guise of landscape. First, the high vantage point views from high-rise windows or tall overpasses, whose downward gaze removes the horizon-line and flattens the scene to an almost map-like topigraphicality. Secondly, brilliant sunshine on a clear afternoon casts shadows so strong that they can upstage the light and carve unexpectedly intriguing shapes as they hug forms and tail away on pavements.

As a colorist, Kapp has honed in on a spectrum of greys that range from a warm dove to a dark blue-black granite. Although the indiscriminant use of grey can be problematic, deadening hues and neutralizing differences, Kapp instead, seems to energize it and creates upbeat harmonies through the use of orange under painting and bold tonal contrasts. Compared to earlier shows, these pictures are more thinly painted, more tonally nuanced, less scumbled, with some passages as dry as a sun baked slab of slate on Broadway.

The ubiquitous scenes of urban highways, clogged with masses of chrome and enameled automotive color and traffic stripes, are symbolic images that express our current car culture like few others. Kapp has employed this motif consistently, yet his development of various perspectives, compositional structures, and surfaces show the vast potential of the subject.

In “Fifth Avenue South II” (2005), a tapering swath of street is visible between tall banks of skyscrapers. The cool light grey of the illuminated asphalt is dappled with yellow stroked cabs and the blue and white blocks of trucks. Shadows cast from encroaching buildings stream from left to right, cutting and pinching the central shape. Space is palpable and one almost expects to hear the muffled sounds of tires hitting construction plates and distant horns honking.

“Ticket Lines at Shea Stadium” (2005), is perhaps the most abstract painting in the show. Viewed standing close it is a confetti flutter of whites, dark blue, cobalt and powder grey over a Naples-yellow and peach ground. Stepping back, the planes congeal figures solidify and a teaming crowd in a parking lot appears, weaving their way between traffic barricades on their way to the game. The velocity of Kapp’s brushstroke and the skidding scrapes from knives seem to blur the figures and impel the forward-like distortions of slow speed photography. Add the smell of mustard and hot asphalt and it doesn’t get more New York.

Raymond Foye speaks with Michael Snow about his pioneering work as an artist and filmmaker.