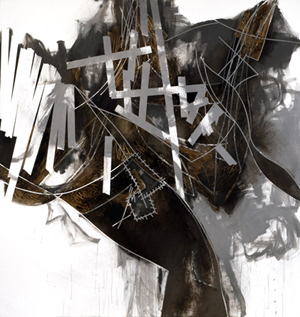 Charlene von Heyl has been making smart but elusive abstract paintings for some time now. Her current show at the Friedrich Petzel gallery offers a clear view of her sometimes hermetic approach without giving the game away. The six paintings on view share the same dimensions and a similar methodology. Networks of tight curves block out a central set of shapes and trail off to leave blank or barely-treated edges. This variable substructure is then processed in different ways: some areas are built up with loosely-modeled, brushy oil paint, others are blocked out with tape or stencils and overpainted, and some are left jarringly unfinished in casual, scratchy swaths of thin acrylic. These decisions result in paintings that feel both analytical and improvised.

The paintings are like fraternal twins grown eccentrically apart: in Happy End, the main dividing lines of the canvas become illusionistic branch-like forms twining through patches of pastel-colored oil paint and then dissolving into delicate filigrees. Dunce employs a similar language of shapes in a stark palette of black, white and blue, incongruously dissected by jarring diagonal stripes or lattice-patterns. In Woman, outlines of masking tape guides have been retained as the painting’s salient element, bringing the viewer’s eye to the surface of the canvas and her mind to the set of process-based decisions made by the artist. But calculations come to a messy end in Poodle Pit, in which a smeared cloud of fecal brown obscures the painting’s barely perceptible structure.

There’s a sense of the haphazard in some of von Heyl’s choices, as if the resolution of the painting did in fact emerge spontaneously during her process. But it’s a haphazardness that comes at the end of a long and rigorous series of decisions. This element of quasi-chance, or non-criticality, rubs against the overt indications of calculation in the work and reads as a precisely measured dose of fuzzy, willful subjectivity injected into a cerebral process.

A set of framed black and white works on paper, featuring Xeroxed images treated with spray paint, washy ink or charcoal, sheds more light on von Heyl’s paintings. If the master metaphor of postmodern abstract painting was the flatbed of the printing press, von Heyl’s work has more to do with the glass sheet of the copy machine: a transparent surface onto which disparate images can be momentarily gathered, and which the viewer necessarily encounters at one remove from their source.

There are plenty of precedents for this sensibility but the most interesting one is late-era Willem de Kooning. The still contestable body of work made by the ailing artist in the 1980’s has, in retrospect, opened up a critical language for abstract painting that has proven to be as fertile for painters of the past twenty years as the brush-swinging bravado of his 1950’s work was for second generation abstract expressionists. But artists like von Heyl have focused on the aspects of de Kooning’s late work that made it suspect for that artist’s traditional admirers: his use of projected images, the work’s sense of formal dissolution, and its nagging intimations about the erosion of de Kooning’s authorial control. I imagine that for von Heyl, the ways in which an abstract painting is disjunctive, incomplete, and contaminated are not faults, but are precisely the qualities that make it worth continuing to explore.

Matisse, among other Old Masters, gets the full Yuskavage treatment in her show of 14 new paintings at Zwirner, displayed in two rooms.