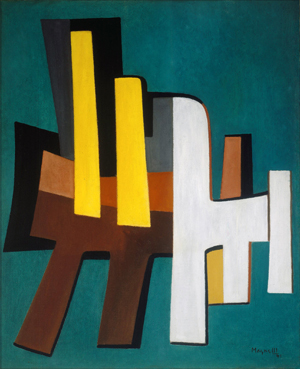 An autodidact, Alberto Magnelli (1888-1971) is often considered the first Italian abstract painter. Born in Florence and deeply inspired by Tuscany’s abundant Renaissance treasures, he began painting in his mid-teens. Although he met the Futurists, including Boccioni, Marinetti and Carra, as early as 1911, Magnelli never identified with their ideals and remained an outsider within the Italian avant-garde. Rather, it was in Paris in 1913—after befriending Picasso, Gris, and Léger—that his work, based on simplified, heavily outlined shapes, made its resolute shift toward geometric abstraction.

However, as the scholar Daniele Abadie points out in the catalogue essay that accompanies this exceptional exhibition of works from 1937-1964, compared to his Cubist peers, Magnelli’s overall approach to form always remained more romantic than analytical. With the eruption of World War I, Magnelli returned to Italy and, surprisingly, to more traditional (albeit abstracted) landscape and figurative compositions. Not until the early 1930s did he retrace his steps towards abstract painting, when visits to Carrara’s marble quarries sparked Pierres (1931-34), a series of paintings of stones.

The earliest works featured at Leonard Hutton Galleries date back to this breakthrough, soon after which Magnelli returned to Paris. In addition to renewing his acquaintance with Picasso, Magnelli met Kandinsky and Arp, whose influence is undeniable. With his career progressing, Magnelli’s style became more playful, and his skill at combining elegant geometric shapes with balanced hybrids of color and form grew more sophisticated.

“Accords Alterné” (1937) contrasts a series of vertical black rectangles with a loose, horizontally arranged line drawing. Set against a burnt sienna ground, these two opposing forces function as both dynamic counterparts and counterweights. In two canvases from 1941, “Assurance Répetée” and “Calme Fabuleux,” Magnelli further simplifies his shapes while complicating their physical relationship. Carefully interlocking structures painted against monochrome planes blur the distinction between background and foreground. Forms rendered in soft yellows recede in contrast to stark whites, yet almost seem to pop through the surface when outlined in red beside a deep gray. Of course, this technique isn’t startling in light of 20th-century color theory, but Magnelli employs it with a timeless elegance and subtlety.

This quality prevails in the collages, an extensive body of work that gained prominence in the artist’s oeuvre when World War II led to a scarcity of paint and canvas. Many works, such as “Collage No. 89,” were completed in Plan-de-Grasse in Southern France, where Magnelli and his wife were neighbors of Robert and Sonia Delaunay, as well as Jean and Sophie Arp. His innovative mélange of unusual ingredients—including patterned papers and iron wire—with such traditional materials as gouache, black chalk, and colored and lead pencil, hint at the experimental freedom Magnelli experienced in this work.

“Collage No. 99” (1942) resembles a painter’s palette in which the reservoirs of paint have been replaced by variously colored paper scraps. Layered and interwoven cut-out shapes, ranging from thin rectangular strips of decorative paper to a large ochre form that looks like a melted saxophone, create an intricate pattern at once musical and orderly. Earth tones dominate these collages, underscoring the straightforwardness of their visual vocabulary, in which only the occasional line break, cut, edge, or curve defines the elements’ essence and holds the secret key to their individuality.

The Painter & The Preacher: Botticelli’s Mystic Nativity and Savonarola’s Sermons

At first glance, Mystic Nativity looks like any number of Renaissance representations of the birth of Christ. At second glance, the work becomes more unsettling and its “mystical” characteristics come to the fore

A committed experimentalist, the Valdarno-born Pancrazzi, who lives and works in nearby Florence, reveals the man behind the curtain in one key picture, Flash, of a camera on a tripod. Its flash is aglow at left—it seems to explode from the picture surface—causing delicate blue rippling rings to pulse out from its center. Source becomes subject, and it is the combination of lenses, flares and glancing reflections, suffusing incandescence, and manipulated perspective that coalesce in this stimulating body of work.