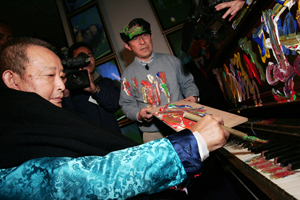 Three years ago, I received a call from Dr. Matthew Lee, a world-renowned neurologist who specializes in the field of thermography at New York University. Dr. Lee had been working with Nam June Paik on rehabilitating the artist’s neurological functions after a severe stroke in 1996. Thermography is a photographic heat process that records the activity of the brain and neurological functions as a means of identifying problem areas. Dr. Lee, who had been treating Paik for several months, was invited to present a lecture on the use of thermography at the Museum of Natural History, during which Paik would be present. As part of the proceedings, Dr. Lee asked if I would moderate the discussion in relation to Paik, and, in the process, talk about the thermographs from the point of view of photography in the fine arts. With some hesitancy, I agreed.

The event opened with a table on stage and a screen whereby the audience could view the thermographs of Paik’s brain. Paik sat in his wheelchair on the left, Dr. Lee was on the right, and I was positioned in the middle between them. I began my remarks by noting the differences in viewing these medical documents from the position of science and from that of art. As I was speaking, I noticed Paik had acquired a banana from his nurse backstage, presumably to raise his sugar level, as a result of his diabetic condition. He also wanted to demonstrate to the audience that the motor sensations in his right arm and hand had been rehabilitated, thanks to the persistence of Dr. Lee’s therapeutic sessions. Suddenly, as I was making a point related to medical practices in the East and West, I felt a piece of banana being pushed into my mouth, mobilized by the hand of Nam June Paik. The audience broke out in a nervous laughter that accelerated as Paik continued to fill my mouth with pieces of the banana.

I mention this incident to suggest that, throughout his career, Nam June Paik had a remarkable ability to raise the consciousness level of his audience through pure intuition and absurd humor. Indeed, he was one of the truly unpredictable and unpretentious artists to emerge in the second half of the twentieth century. His attitude belonged as much to Dada as it did to Zen, and as much to the East as to the West. A radical thinker from the outset, this young, itinerant Korean Odysseus began as a musician and art historian at the University of Tokyo before moving to Germany in the mid-fifties. Once in Germany, he met such avant-garde music luminaries as Karlheinz Stockhausen in Freiberg and John Cage in Cologne.

The meeting with Cage in 1958 was of particular importance in convincing Paik that he should pursue a career in avant-garde art rather than becoming a classical pianist. Eventually, his early association with Cage, Joseph Beuys, George Maciunas and other Fluxus artists gave him the freedom to introduce video as an art medium in 1963. By this time he had moved to New York where he established important connections with the Japanese engineer Shuya Abe, the artist (and eventually, his wife) Shigeko Kubota, and the concert cellist Charlotte Moorman, all of whom proved instrumental as collaborators in performance works that would soon make Paik an internationally recognized artist.

For those who saw “The Worlds of Nam June Paik,” a retrospective at the Guggenheim Museum in 2000, or his first retrospective at The Whitney Museum of American Art in 1982 (both curated by John Hanhardt), it was evident that the artist had traveled some distance over the years. In fact, he had traveled light years. Paik’s playful attitude toward the media, his use of sound, his groundbreaking broadcast of “Global Groove” in the early seventies, his work with old TV cabinets, magnets, Buddha statues, and laser light have been more than thought-provoking art objects. These works have become virtual conceptual filters for heightening human consciousness as the media world moved from the post-industrial age to the nanoseconds of the impending future. Paik’s influence had a major impact on helping us all realize that transition. Quite simply, his work constitutes a monumental achievement in the history of art.

I could not help but read his lexicon of video objects and installations as representing a transitory moment between art and life, a incendiary spark of enlightenment, suspended in time for all to see. Paik’s inventiveness and ineluctably precise intuition have afforded viewers a space and time to reflect on the dialectics of art in the face of repressed mediation and governmental control. His “Meta 11” (2004)—one of his last major works—offers a subtle and evocative poetics—a Heideggerian twist—in which the tragic events of September 11th are so metaphorically internalized that they provoke a frustrated synopsis of disbelief—the disbelief of people watching the world change before their eyes. Paik’s powerful bricolage of video signs accompanied by Buddhist chants, orchestrated by a marionette of a 1940s Chesterfield girl situated between two vertical stacks of plasma screens, speculates on the aftermath of the tragedy. The memories of the past are indeed the memories of us all—as his art has become a fundamental premise by which we have come to understand ourselves. The world mourns the loss of Nam June Paik, yet celebrates his irreconcilable quest toward clarity amid the chaos and contradictions that propel our embattled transcultural planet onwards.