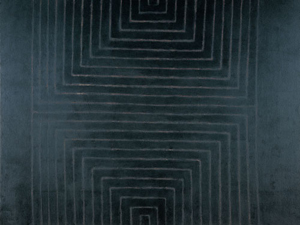 At 24, John Keats had his annus mirabilis, during which he wrote “The Eve of St. Agnes,” “Ode to Psyche,” “La Belle Dame Sans Merci,” and “Ode to a Nightingale.” Within two years he was dead. At 22 in 1958, fresh out of Princeton, living cheap and working hard in Manhattan, Frank Stella had an annus mirabilis as well. He may have enjoyed others since, but 1958 was decisive for him as an artist. This is the premise of Frank Stella 1958, an exhibition curated with exceptional intelligence and imagination by Harvard’s Harry Cooper and Megan R. Luke.

What the evidence shows is that in 1958 Stella painted himself into and out of a world, a body of work so complete that he could turn his back on it. This doesn’t seem like a phase, but rather a defining moment when Stella learned that he did not want to do what he could do, and went on to paint the black and gray pinstriped and notched paintings that, by the end of 1959, had secured him representation by Leo Castelli and a place in the collection of the Museum of Modern Art.

In their essays for the exhibition catalogue—a well-designed pleasure to hold and read—Cooper and Luke advance the case that, to get where he was going, Stella had to absorb and surmount the work of Jasper Johns, a task Stella accomplished with bravado. His “Them Apples,” with its nailed-together cardboard panels, is a purposefully homemade Bronx cheer—“How do you like them apples!”—directed at Johns’s flag paintings and his targets with cast plaster faces. Stella was working with stripes, but not the way Johns had. Stella’s goal was to “keep the viewer from reading a painting” or “moving around in the painting.” The plot of Frank Stella 1958 is his failure to accomplish either of these objectives.

Harvard’s Fogg Museum has long owned “Red River Valley,” the catalogue’s cover image. At 7’ 7” x 6’ 7”, it is the scale of New York abstract painting at that time, and it bears the signature flecks and drips of the period. From a pattern of alternating green and black stripes, a red column appears at the right and tapers toward the painting’s top. You can see the blue and black underpainting, like mud in a river, beneath the column and the uneven stripes. The image has a clumsy, awkward appeal—homely and hand-wrought. It is a painting you can sink into, read and roam around in. Fraught with emotional associations, “Red River Valley” is a painting that says more than, “What you see is what you see.”

It is also a painting, like all the others in this show, that seems to have failed for Stella precisely because it succeeded. We’ve seen paintings like these before and since—the work of Jack Tworkov comes to mind, as well as Sean Scully (although, had he been interested, Stella’s cheap paint would not have allowed for Scully’s lavish handling, a world in itself). You can see this “failed success” most clearly in “Morro Castle,” the direct antecedent of the black paintings selected by Dorothy Miller for MoMA’s “Sixteen Americans” show. Here the stripes drift off-center, like lines in a handwritten letter that the writer had been unconcerned and/or unable to keep straight. As with “Red River Valley,” the stripes form an image and invite an interpretive reading. They could depict boxes within boxes or an architectural plan of a stepped plaza or perhaps an abstracted imagining of the real Morro Castle, a fort at the entrance to Havana’s harbor.

What Stella did nowhere in 1958 was make the sort of annihilating black pictures that brought him instant fame. These objects, elegant as a banker’s (or gangster’s) suit, take painting into the realm of architecture. They have an authoritarian force that Stella seems to acknowledge with titles referring to Nazi Germany, even once labeling the pictures as having “a certain fascist element.” The landscape references found in the work from 1958 have been obliterated, along with the window figures in “West Broadway,” “Grape Island”, and “Coney Island.” It may be that the part of Stella that looked out onto the world had been purged by these paintings, freeing him to pursue what he saw inside himself: that which could not be read but would stand still, obdurate and implacable, courting no viewer.

If it is impossible to see Frank Stella 1958 without thinking of his future, the show’s reference points are not solely the black paintings to come. It also includes three collages that Stella sent, perhaps as jokes, to his friend, the painter Walter Darby Bannard. They brought to mind Stella’s work of the past 25 or so years, his—what to call them—bas reliefs, that to my eyes are the epitome of corporate art. Compared with where Stella was in 1958, these tangled projections of steel and paint loom as ego-driven acts of will. When Stella gave his Norton Lectures at Harvard, later published as Working Space, the Fogg showed a lovely, funny set of small wall sculptures titled “Playskool.” Like his work of 1958, Stella had to leave these behind to follow his star, another instance of, in the words of the song “Red River Valley”—“From this valley they say you are leaving.”

That a contemplative artist like Agnes Pelton (1881–1961) is having an exhibition in a shuttered museum, as her viewers are experiencing enforced reclusion during a pandemic lockdown, has a profound synchronicity.

Karla Knight’s mysterious spaceships transport the viewer into other-worldly dimensions at a time when much of the art world can feel grounded by an ideological flat earth society. Like Hilma af Klint, whose works were channeled from higher masters in the astral plane, Knight’s remind us that art can originate from realms both mysterious and incomprehensible. Positivism, Adorno’s anti-occultism, and the “liberation” of art from its spiritual mission have dominated much recent discourse. When reading Knight’s statement—“I would say a visionary is someone who is a good listener, and a bridge between two worlds”—this critic wanted to applaud. Her works resonate and affect us deeply and draw the viewer into deeper meditations with their presence. Karla Knight’s art is pulled from the artist’s own psyche and lifts us into the fourth dimension where the spirit resides. It bucks many recent collective theoretical trends.