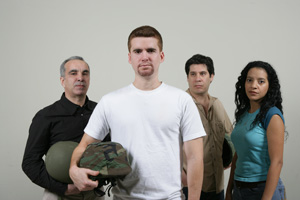 As American military deaths in Iraq climbed past the 2000 mark this past October, Slate.com ran a cartoon by Signe Wilkinson showing an infinite line of flag-draped coffins, each with a number on it. Hovering attentively about coffin number 2000 was a pack of politicians, clergy, and media. Completely ignored were coffins number 1999 and before, and 2001 onward.

Americans—and especially the American media—love easily-recognized symbols and icons to help define and categorize the chaos of an ever-widening war with an ever-shrinking sense of purpose: Lynndie England (bad) counters Jessica Lynch (good). And just when Americans are numbed into indifference by images of Iraqi, Afghani and Pakistani civilian “collateral damage” of US military “miscues” (bad), an Iraqi infant with a life-threatening birth defect is found during a US Army house invasion and whisked to the States for surgery in the brawny arms of the 101st Airborne (good). Like a TV reality show that types its characters for immediate identification (bitch, hunk, ditz, clown), this media-ized war creates its own stars and villains, preferably those who are photogenic and speak in pithy soundbites of three to five seconds at a time.

What often gets lost in this perpetual rush, of course, are the real stories, those of the mostly very young and working-class men and women who joined the military in the hope this might be their ticket out of a dead-end life on the wrong end of an increasingly have and have-not society. These are the ones who may speak, but are seldom if ever heard back home, shoved ill-equipped and under-prepared onto a deadly playing field of ever-changing rules and objectives, often for tours of duty that are extended, two, three, four times beyond what they had signed up for.

Quiara Alegría Hudes’ new play, Elliot, A Soldier’s Fugue, offers a grunt-level voice to the unheard not just of this generation’s war, but of Vietnam and Korea as well. Weaving the war stories of three generations of the North Philadelphia Ruiz family, Hudes’ Elliot—which runs through February 19 at Manhattan’s 45 Below at the Culture Project—crafts an interwoven elegy that is testament more to identity than horror, familial connection than political resistance. By opting not to shade her story as either pro-occupation or antiwar, the whole of Hudes’ play becomes something larger than its individual parts: a meditation upon the cyclical nature of destruction and renewal that is (masculine) human nature.

Powering the play throughout is the metronomic pulse of its musically-structured core, not surprising as Hudes’ first calling was as a musician, not a playwright.

“I was always a writer, but my first training was as a composer,” Hudes recalled recently during a rehearsal break in a midtown studio. Her mother bought her her first piano for $22 at a church fire sale in their West Philadelphia neighborhood when Hudes was nine. “She paid four strong local guys to roll it down the street and haul it up the steps into our living room. I was self-taught at first. I learned by ear.”

Hudes studied music formally as an undergraduate at Yale College, where she absorbed myriad musical styles that would later manifest themselves in her writing. “As a musician, I played along with many genres,” she remembers. “I taught myself Bach minuets. I played along with New Orleans blues records. I learned salsa montunos awnd choral parts of Afro-Caribbean Santeria music. There was something romantic about being a music composition major, writing at the piano until four in the morning. It prepared me for the discipline and isolation of writing. And also for the need to merge instinct with structure.”

Hudes had a need for structure in her life, as well, especially upon her move to New York following the completion of her MFA in playwriting at Brown University, where she had managed to write one scene of Elliot before pushing it aside. “I put it in a drawer for a year,” she says. “I wasn’t ready to deal. It was painful.”

Page 73 Productions (P73) provided the bump that helped Hudes deal. Formed in the fall of 1997 by college chums Nicole Fix, Elizabeth Jones, Asher Richelli and Daniel Shiffman, Page 73 (the name refers to an early play the group liked that was missing a page of key information) has developed “pretty organically,” according to P73 Producing Director Elizabeth Jones. “We’ve never had a season, and for a long time we never had much of a long-term plan.”

P73’s gypsy beginnings began to sprout roots with the launch of its fellowship program in 2003, a project aimed at nurturing emerging writers and one which would require P73’s commitment to the selected artist for at least a year’s time. “When we started the fellowship, we finally put ourselves in a position to think ahead,” says Jones. P73 chose playwright Hudes as its second fellow, in September, 2004.

“None of us had ever heard anything about Quiara or her work before we received her fellowship application,” Jones remembers. “She submitted the first ten pages of Elliot, and we were very taken with her voice and the subject matter of the play, as well as with Quiara’s clearly stated need for a home base during her first year in New York.” P73 provided Hudes not only with the structure of a home base, but with the context of a purpose for the play was well. “I got the fellowship and I finished the play in two weeks,” Hudes says.

The task of grounding Hudes’ eclectic structure and poetic text in performance reality falls to director Davis McCallum, who has obtained considerable notice for his early work on Sarah Ruhl’s Euridyce and The Melancholy Play, and large ensemble period pieces such as The Belle’s Stratagem and Unbound: The Journals of Fanny Kemble. With Elliot, the cast is small—four actors—but the scope is huge: Korea, Vietnam, Iraq and North Philly threaded across a timeline of 50-plus years.

“I remember reading the play and immediately getting excited about the challenge of its non-naturalistic aspects,” says McCallum. “How to handle the mix of narration and action, how to stage the letters home, what the relationship between the actors and the audience wanted to be.”

Working with set designer Sandra Goldmark, McCallum devised a set that both complemented playwright Hudes’ concept and took advantage of the unique configurations of 45 Below, Culture Project’s sub-level performance space. “I had the sense that the story of the play should unfold among the audience, like as part of a community meeting,” McCallum continues. “I found a picture from Puerto Rico of a cockfighting arena—a recessed central circle—with an audience on risers surrounding it. That felt right.”

In rehearsal, McCallum moves actors Mateo Gomez, Zabryna Guevara, Armando Riesco and Triney Sandoval in and out and around the circle stage manager Jennifer Grutza has taped off on the floor, searching for the right choreography of movement and language. There is a relaxed but focused energy in the room, punctuated by the unique, sometimes excruciating, sense of stop-start discovery that comes when a new play gets up on its feet for the first time.

“No one knows what happens next,” McCallum muses at one point, staring at his notepad. “Not even the director.” Playwright Hudes sits propped against a wall and says little, watching, occasionally pecking away at her laptop.

“Elliot is based on my cousin,” she elaborates later. “He was the bright star in our family. After he was injured in battle, I met up with him out in California, and I was blown away. He still retained that boyishness but he had bombed buildings and shot people. It just blew my mind. On the airplane home, I kept thinking of my little baby cousin. This play was my attempt to make sense of his experience.”

It is perhaps Elliot’s strong foundation in her own family’s experiences that prompted the strongly antiwar Hudes to fashion a play that neither glorifies nor denigrates the young men and women who stare down death and dismemberment every day, 24/7 while on the front lines. She simply lets them tell their stories, stories repeated from generation to generation of veterans, each with his or her own war, interwoven narratives overlapping and harmonizing along a shared theme.

“I think Elliot is an antiwar play,” says director McCallum. “But it never mentions WMD or Rumsfeld or the Bush administration’s conflation of 9/11 and Saddam. It’s just about one kid in Philly and his own decision to enlist.”

“In North Philly in 2002 and 2003, the military was providing a real opportunity for young people to get out,” adds Hudes. “A lot of Latino boys and girls were enlisting. I think they saw the drugs, the violence, the poverty and the depressing jobs around them and knew they needed a change of scene. The military provided them with that.”

With the P73 fellowship providing Hudes the freedom to develop the play any way she chose, she began with a public reading in New York in December 2004, and has moved steadily forward ever since, always with an eye towards a full P73 production.

“One of the components of the fellowship year is a public presentation of the work, either in workshop or production format, of at least three to four performances,” explains P73’s Jones. “We decided to produce Elliot for two reasons. First, it seemed like the right thing to do for the play and, secondly, it was time for P73 to produce a full production. While there is certainly a great need for well-planned development opportunities for emerging writers, there is also probably a greater need for opportunities for those writers to see their work fully staged.”

Playwright Hudes agrees. “Just doing a bunch of readings at a bunch of different theaters, there’s a lot of pressure because you keep thinking, ‘will this theater produce my play?’ But with Page 73, the pressure didn’t exist, so I was able to focus on the writing.”

“P73 provided the play’s home, a touchstone as I wrote new drafts.”

Brook Stowe is a playwright and the editor of the annual New York Theater Review.

Mark Laver’s Within at Ricco/Maresca approaches the landscape through a radical subjectivity that blurs the boundary separating nature itself from our perception of it.