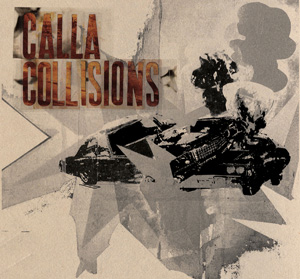 Seductive and moody and oh-so-beautifully textured, the songs of Calla are reflections and shadowy whispers from your hidden corners. Listening to these songs is like sitting at a dark corner table in a basement bar, or being underground with a fallen angel telling you fables, or walking the city on a quiet night, or waking up from a dream and trying to grasp at the fleeting images that just recently occupied your mind.


On Collisions, it takes until their third song to return to the bare-bones whispering and minimal bass that characterized Televise. This is their bread and butter—the collision of silence and caged passion that always threatens to explode, and often does. Nonetheless, Collisions is a step forward for Calla. It is more confident and, dare I say, more upbeat than Televise. Starting off fast and strong and loud, the disc bristles with tension, haunting melodies, precision, and gorgeously thick music. Sonic cousins of Interpol, the members of Calla seem ready to inspire their own brood of imposters.

They seem to be more comfortable in their hipster-angst skins, drawing on their music to suck emotions out of the air that are so very rich. They’re one of the best-sounding bands to emerge from New York in the last few years. Make it a point to share some time with Calla. Delve in. Revel in. Breathe in. Collide with your hidden self.

Well, as a friend of mine would say, the Subways already had one strike against them because their two-word name starts with “the” and ends with a plural noun. On the other hand, they have a really hot bass player and a stack of great reviews from England. And then their new release, Young for Eternity, starts off with a pretty decent song, “I Want to Hear What You’ve Got to Say”—vibrant, catchy, and fresh. My hope for the band is renewed.

Then it all falls apart.

Apparently the band used up any talent on that first song. On the rest of Eternity, they immediately fall into a Strokes–Vines–Hives frame and I start to get bored. Reaching back into the past—or the near-past—for a sound is fine; recycling a sound and adapting it to modern needs is one thing, but outright cloning is another.

“Rock and Roll Queen” is tired, overdone, and familiar. See if you can guess the melody from these words in the chorus: “Be my, be my, be my little rock and roll queen.” If you had trouble, pause slightly at the commas and sneer while you sing. I heard this when Joan Jett did it twenty years ago.

The rest of the band’s songs follow a similar pattern—retreading old ground. Badly. Add in some Oasis, Verve, and Blondie, (and of course the obligatory ballad), and you get the idea.

When I listen to bands, I listen for two things: Does the music make me feel? and does it sound the least bit original or fresh? Guess what I thought about the new Subways disc?

Young for Eternity gets old fast.

3. “you’re a fool to play things cool
/ when you’ve got everything to lose”

Brash and loud and a bit honky-tonk, the 22-20s burst out of my iPod. Their music makes me want to thrash at a guitar or wallop on a bass for a while. With a nice bottle of whiskey in the other hand, of course.

With inspiration from seventies southern-rock bands, the blues, and early rock and roll, the 22-20s come at you full-force. The vocals, strong and aggressive, are the perfect match for the music: imagine the Old 97’s on steroids. Or cocaine. Rollicking tunes are the modus operandi here, as is an extremely tight rhythm section. Turn their self-titled albumup loud.

“Devil in Me” begins the album with confidence, followed by the whirling, layered blues song “Such a Fool.” “Baby Brings Bad News” is exactly what it sounds like—a slow, sultry anti-love song. And “22 Days” is amphetamine music, with grinding guitars, subversive feedback, and one wicked bass that keeps the song rolling like a train out of control.

Of course, there are stumbling blocks, like “Friends,” which is a ballad that comes off way too hokey and Bob Dylan-y. Or another slow song, “The Things that Lovers Do.” Heck, you can tell by the title how that one is going to come out.